Is there a practical difference to the "special" mode or is it the same as "single shot" for heavy weaponry?
Top

Speed is a character attribute that affects initiative and delay. Weapons with Medium or Slow speed designation will have a speed penalty.
In practice burst fire will have one attack more than semi.
The only difference between single shot and special is the actions they unlock. Otherwise you would snipe with a rocket launcher.
RPG Programmer for Winterwolves, currently working on: Amber's Magic Shop
Part-time emotionless AI
Top

Hi, I have a couple of questione concrerning weapons. First of all I've upgraded Michelle's skill for off-hand Damage to tier 5 but when I snapshot with her the second instance of damage Is still multiplied by 0.4

I'm mostly spamming aimed shots and even though the damage is certainly there I feel like criticatl shots are not as much a part of the Scout gameplay experience as I'd like. If possibile I'd like to know crit chance formulas (it'd be nice to see them in the combat log) and, if I'm missing something, what I'm missing in order ti maximize the Scout experience xD Thanks in Advance, really enjoying the game!
Top

First of all the info on this thread is outdated, since was made with another engine in mind which unfortunately was never finished.
So to get back on your questions:
1) I'm not sure if I understood what you mean? In theory the snap shot should work with only the pistol since SMG only have SemiAuto,Auto as attacks. But it's possible that something is going wrong, since dual wielding with different kind of weapons is indeed a bit of a pain to code with this system so something might be wrong
2) regarding rifles, instead I think they really kick asses. At least with Rebecca and Philipp, but even if your PC is a sniper should work the same. 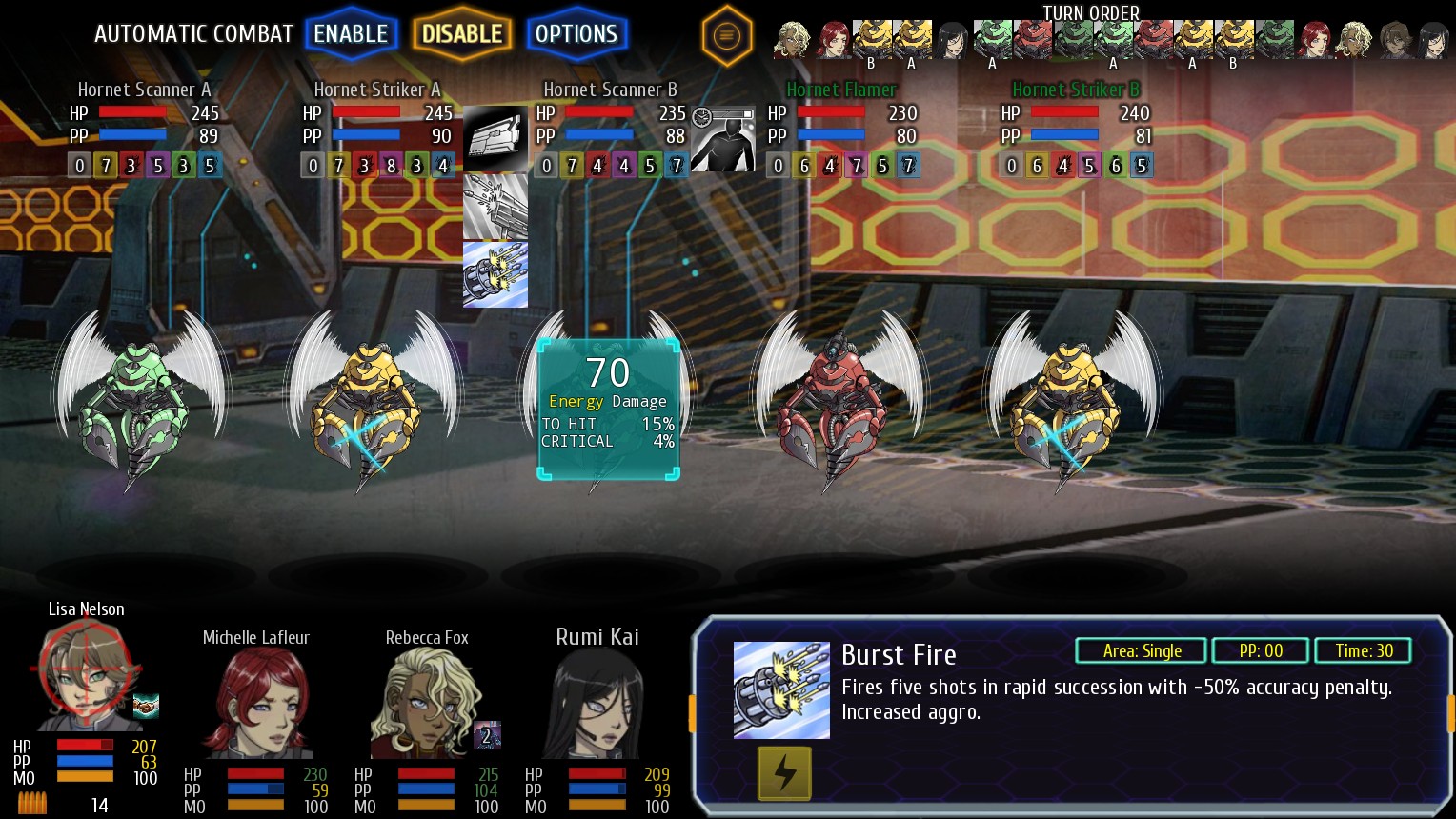 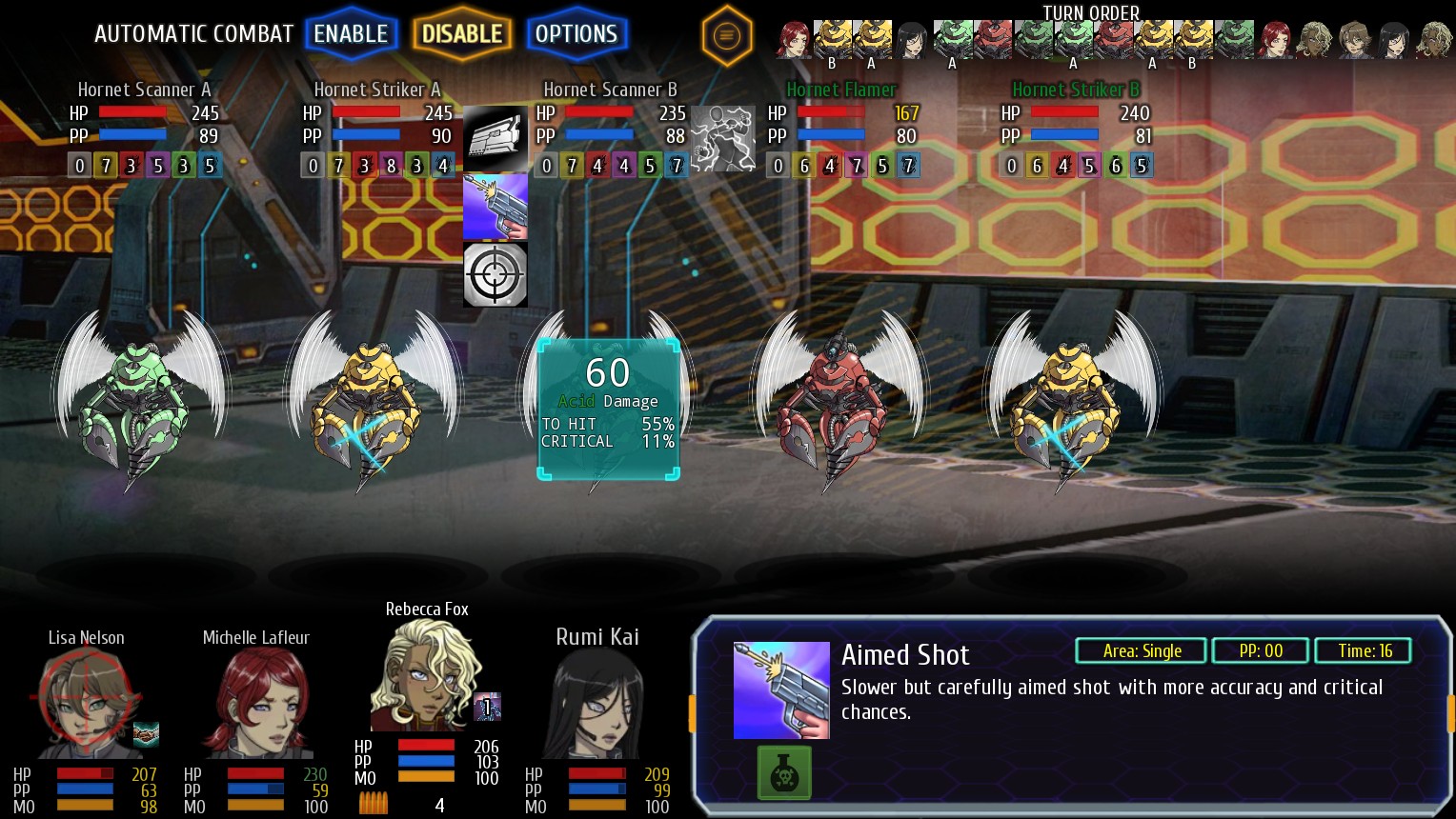 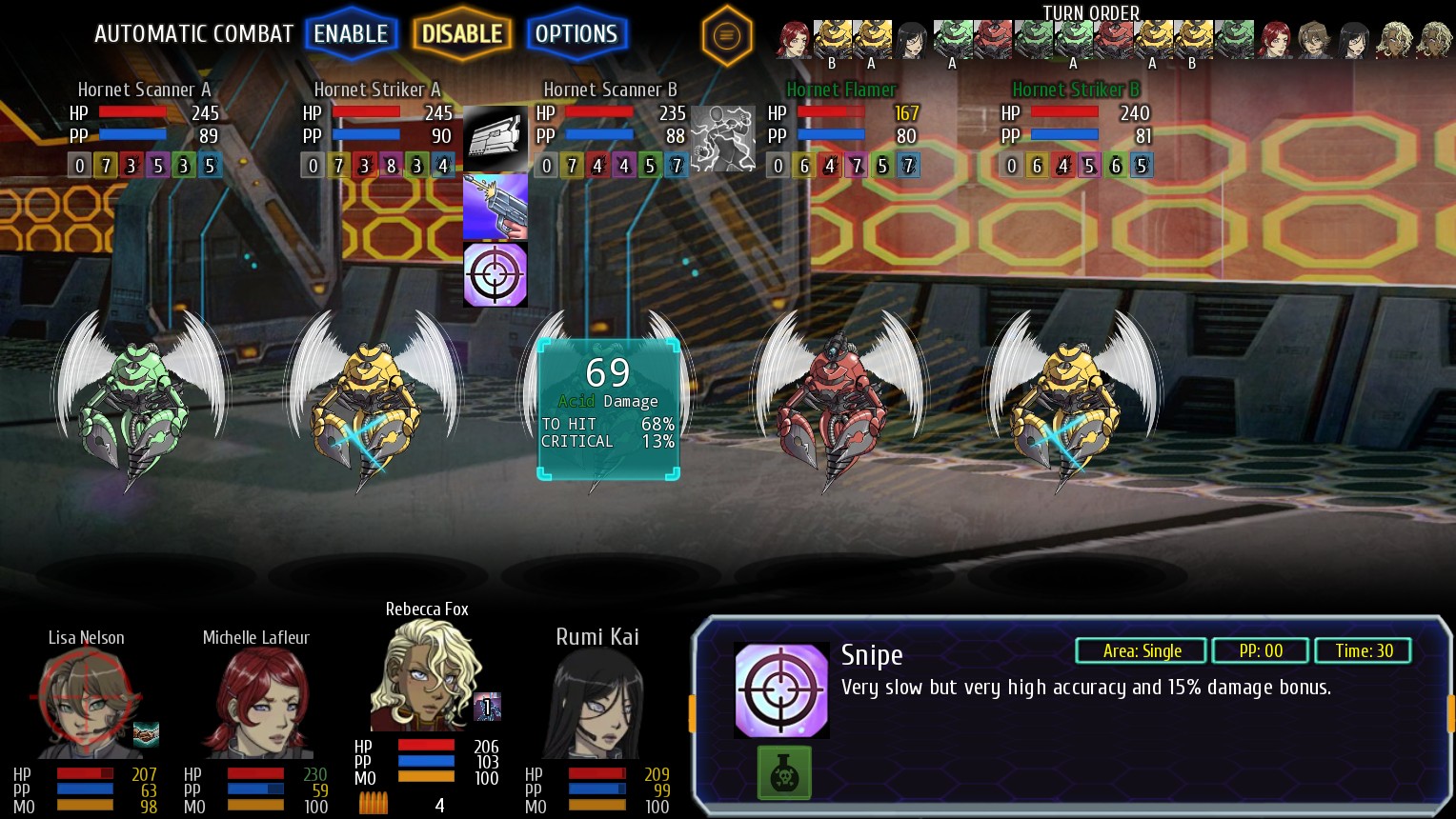 Last but not least sniper rifle have the highest critical (of course if compared to same level / rarity items), so if you do a critical with a pistol it will do much less damage than with a sniper rifle.
Top

Ah, the formula is as usual a mess and rather complex but here it is:

basically with a base of 75%, add attacker's accuracy, subtract target speed/evasion, multiply resulting value by accuracy of the attack type, add the difference of levels (so level 10 against 8 gains +2%) and lastly it can't be lower than 20%
Top

On Aimed Shot the pAcc is 1.3 (so basically 30% increase) while Snipe is 1.6.
However I think you're right in the fact that there isn't a big advantage using Snipe over Aimed, so I agree that I should change it. I will make some experiments as you suggested, maybe lowering the ammo and delay but higher damage (need to be careful though to not be able to kill ANY enemy with just one shot since could break some boss fights!).

I've just pushed an update that should fix both the problems you found!
Top

I also tried to start a new game on 7.3.0 and the secondary pistol dealt 0 damage in the log (while having 3 Damage in the inventory menu). I also had 1 rank in Dual Wield.
Top

Weird, yes it's definitely a bug. And I agree, even after I fix it the values needs to go down!
Top
Post Reply
32 posts