As usual you can pre-order the game here and begin playing it immediately:
https://winter-wolves.itch.io/planet-stronghold-2
(note that due to the Catalina OS madness, it is NOT currently available for Mac)

The game should be rather stable - there will be bugs left for sure, but in particular if you play in VN mode, it should be "safe" to play it already. I have been testing it playing in Hard mode, with RPG battles, and I was able to reach all the 10 different endings!

What's New in 0.7.8
- reduced how frequently "common enemies" use medikits to heal
- fixed some gender-swap text issues (references to Joshua when playing as Lisa) in some Cliff dialogues/messages
- fixed some scenes triggering at wrong times causing confusion

What's New in 0.7.7
- added various expressions to Gustavo's character (so he's not always laughing!)
- fixed more typos and wrong characters/names displayed
- fixed a bug when doing a skillcheck with Lisa/Joshua, would display a variable string like [who.he] instead of replacing it with the correct names/pronouns/etc

What's New in 0.7.6
- fixed typos and wrong character alignment or missing background/images
- sometimes when comparing two items, you'd get a red 0 when it should have been marked white (no difference between items)
- slightly increased delay when using heavy weapons (from 20 to 25)
- replaced Damien's Fear Tactic skill, since the current one wasn't working well (eliminating an enemy by random chance is not fun). Now it deals explosive damage and reduces the target HP/PP Regen by half, very useful against certain bosses!

What's New in 0.7.4
- fixed another bug in the dual wield skilltree: the damage was always the minimum (25% of main hand). Now it uses the correct values
- because of this, the values have been nerfed though! Otherwise Michelle would become too powerful. So the maximum off-hand damage you can get now is 75% (100% would mean doing double damage now that the calculation works)!

What's New in 0.7.3
- tweaked the Snipe attack (exclusive of Sniper Rifles) which now has 200% base accuracy but 40 delays. The idea suggested by an user is to re-create the feeling of a sniper. Some preliminary tests shows that will be much easier to score critical hits (because of higher accuracy) but it should be balanced by the longer delay
- the dual wield skill wasn't working properly (was giving no extra bonus as it should have). Now it has been fixed!

What's New in 0.7.2
- fixed an uncommon bug very nasty bug - if you used the "reset" button during the level up screen, the skills would get duplicated (even if apparently it worked fine). For the regular skills this didn't matter. For the passive skills instead yes since their bonuses would stack (for example 100 Toughness I would add 100 times 10 HP!) resulting in a sort of cheat mode (save a save with Lisa having 1300 HP!!). This has been fixed, old values will remain until you click reset in the level up screen
- by mistake even psionic or non-regular skills were consuming ammo. For example Soot Strike was using ammo, which doesn't really make any sense :D This has been fixed to that only regular attacks (attacks that consume ammo) will do it!
- tweaked enemy Stun ability: the delay added to next action is reduced, and the paralyze icon is displayed on the target. It's still powerful (as intended) but they shouldn't be able to permanently "stunlock" one of your party members for a whole fight!
- made some GUI fixes in the "DEFEAT" screen, also enlarged the text buttons
- Apex Alpha uses medikits much less often (AI tweak), from 40% chances to 15%
- lowered Horcoos self-explosion damage from 5 x level to 3 x level
- fixed a crash that would occur on day 36 during Lakadema scene, if you didn't complete some previous steps of the quest "Project Eden". In both cases it will be marked as completed, but if you also did the subquest "the Truth" you'll gain another 100 XP
- fixed various typos

What's New in 0.7.1
- the Avae crash could still happen if you skipped some scenes in chapter 3. Now it should really work!
- fixed various typos
- tweaked the Aimed Shot a bit so it does slightly more damage and it's more accurate (higher chances to hit for critical), to balance the longer delay vs the Snapshot

- by mistake in several of Cliff's scenes playable even only as friend, he was referring to you always as Joshua, even when playing as Lisa
- fixed several issues in the upgrading system regarding helmets! if you kept upgrading them for like 10 levels, you could end up with crazy values like 60 PPRegen, making someone already powerful like Rumi basically a sort of living psionic energy generator

so now it's not possible to reach such values anymore. After various tests I kept upgrading values for Speed, Psionic and MORegen (Morale regeneration, useful against some enemies in latter chapters) while the others can't be upgraded
- added a toggle on/off button in the upgrade screen so you can choose to show only the currently equipped items, this was is less confusing and you can immediately see which items your team is currently using

What's New in 0.6.57
- fixed a bug in one of the last battles that could force you to use Nelson in 3 consecutive fights but each fight would remove previously used team members, making the second battle impossible to start
- fixed wrong XP displayed in the level up screen (value was -1, so you could see things like "needs 0 XP to level up" when in reality character needed 1 XP)
- the gallery replays for Lakadema endings were wrong (redirecting to Shiler's endings)
- finished adding all thumbnails for achievements

What's New in 0.6.56
- fixed a wrong speaker line in an Avae scene
- fixed a crash when trying to buy "plants" resource from the Dredan merchant
- added almost all achievements thumbnails

What's New in 0.6.55
- added some text explaining in the Mind/Constitution attributes that the current Fatigue value might alter the numbers (it reduces the increase in percentage)
- the grenade screen on combat has been changed, the << and >> buttons now scroll the available grenades page by page so it's much faster to browse them
- upgrading certain items like Rebecca legendary rifle (obtained through her personal quest) was causing the damage to decrease, this has been fixed
- fixed various crashes when trying to upgrade legendary weapons in the crafting screen
- lowered the Horcoos enemy levels during Milo's personal quest

What's New in 0.6.54
- fixed a bug during Avae scene causing a crash with "NameError: name 'avae' is not defined". It's enough to replay that scene from the begining for it to work
- Rumi pesonal quest: the various hugs/kisses and other romantic effusions variants during the quest will show up only if you do it after Rumi/Joshua are back togeter, due to the particular nature of this romance path, where they're not close until later in the story. Also, fixed the wrong description of the reward item, is not an helmet but a psionic armor
- fixed issue with quest "Three Oases" not completing successfully as it should
- added all the achievements for the romance CGs, chapter3-4 and the endings for a total of 80! Many are still missing the thumbnail art, which will add in next update
- forgot to script last 2 scenes of Michelle's romance path! sorry this has been fixed now
- from the gallery you can replay all the endings, but for the romance CG due to the extremely branching nature of the game, you can only see the romance CG (not replay the full scene, since there are many variants depending on the relationship values and other things)

What's New in 0.6.53
- by mistake the personal quests were enabled already on Day 3, while they should be unlocked after Day 33!!
- since re-enabled the level up screen, if you play in VNMode and you pick auto-skills, will only pick non-combat skill (useful during the skill checks) since... there's no combat in VN Mode!
- the quest "Eye for an eye" in chapter 3 couldn't be completed in VNMode because the enemy kill-count wasn't working. Now it works and you should be able to complete the quest

What's New in 0.6.52
- re-enabled the levelup screen. Beside fixing some "low HP" issues in VNMode, it was also a mistake to remove it in VNMode, because there are still the non-combat skill checks, so it's useful to put points in those skills to pass the skill checks still present even in VN Mode!

What's New in 0.6.51
- fixed a loop bug happening only in VNMode on Day 3: you can't explore the map because party health is too low, but you can't end turn either
- fixed a crash when trying to access personal messages in your own room

What's New in 0.6.5
- in this update there are the full game contents: the game story is finished, all romance paths, all quests, everything is done. There might still be bugs of course!
- if you find a bug, please report it either in my forums, on itch.io or by email (or using social networks but that might be a bit hard)! I'm not talking only about gameplay bugs, but even possible plot holes, if you find any. Due to the game extreme complexity and branching (it has 10 different endings and variants) I might have forgot about something...!
- added already a lot of achievements, I plan to add more in the next days
Top

And I'm stuck on day 3 on visual novel difficulty. For some reason all party memebers except PC and Damian have 1 HP, 1 PP and 1% MO. Game does not allows to explore because of low HP and tells to rest, but you can't rest unless you explore.
Spoiler: 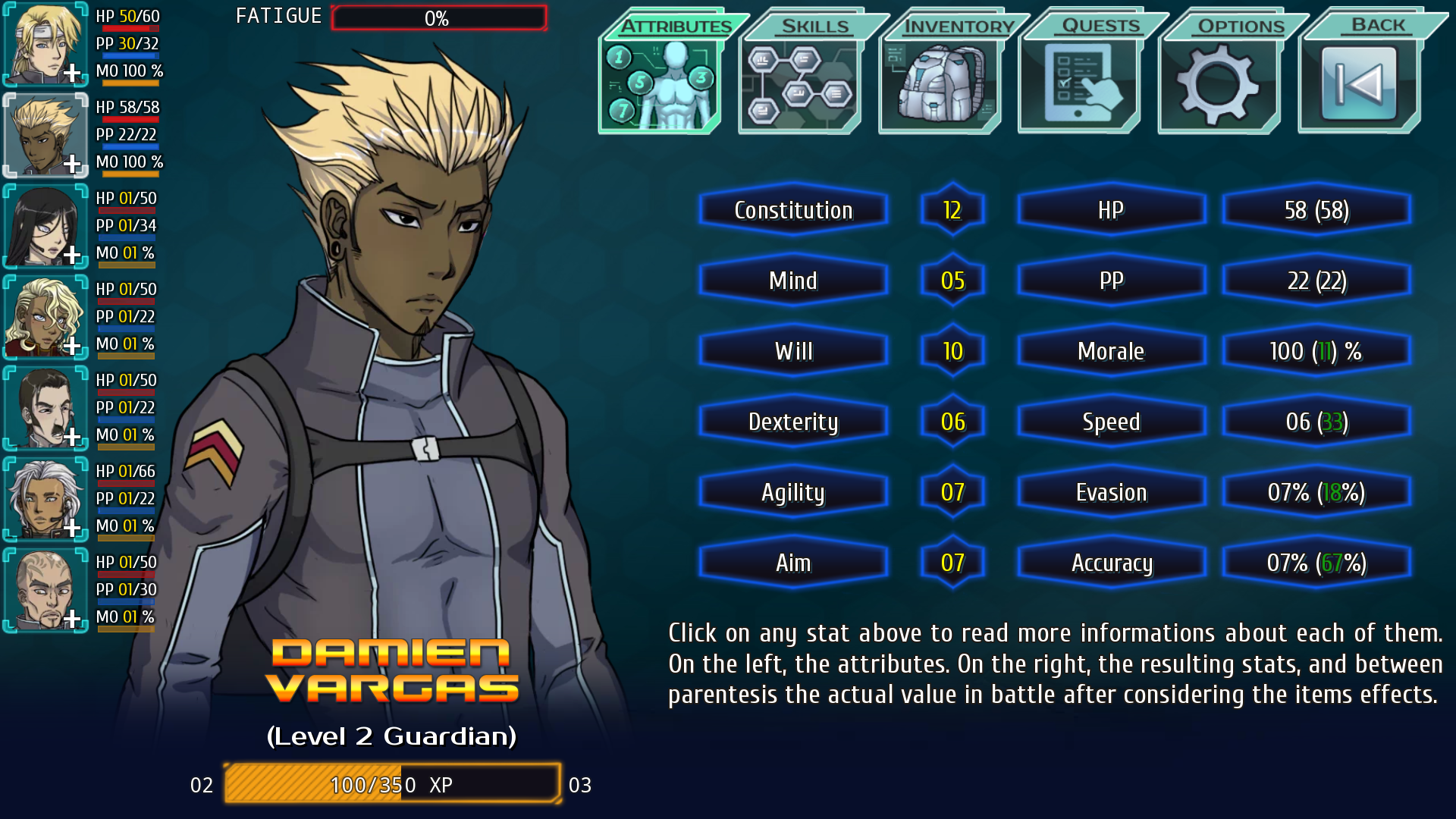 Tried an easy mode everything fine there.

Also if you click on private room this error appears:
Spoiler:
I'm sorry, but an uncaught exception occurred.

Thanks, I think it's a sort of loop because of the VN mode, while the second one I thought I fixed it, strange. I'll check it, I don't think I need any saves if I can reproduce it already on day 3 (otherwise might ask you).
Top

And there is still problems. You can leave colony now, but when you choose what sector to enter, there are again appear message about low HP and you are back at the colony screen.
Top

Aargh, it's still about the VN mode (I didn't test it at all like that). Before was working because I displayed the level up screen while in this latest beta I thought to disable it but I'll add it back since it's "safer"!
Top

I did it now, you need to restart the game and there shouldn't be those "low HPs" issue anymore! Sorry about that

It's okay. I know how it is, change one thing and ten others will broke.

Uhm, when personal quests should be available, because I can do them on day 4 (at least in visual novel mode), even for Milo and Michelle.
Top
Locked
80 posts