Anything not related to one of my specific games, like general polls or promo/sale announcements. For general talk about games, go to the Golden Lion subforum
Post Reply
18 posts

So... rather hilarious to be honest. They shut it down because of "multiple violations".
Some "violations" were showing women with SOME cleavage (not even that much!). Women in BIKINI (which is of course an obscenity!!!) and then a false copyright claim (they were wrong since someone claimed to be the Bionic Heart author haha).

Anyway, today they blocked me, I can't access the developer account anymore. All is gone. I'm not even bothering to get it restored to be honest since it was a mega pain every time I wanted to update something...

On iOS they're still there, not sure for how long/if they will follow the Google censorship madness. But I don't plan to release new games on iOS either.

I'll probably focus on PC only which is a MUCH MORE developer friendly environment than mobile.
Top

Don't all the games have the SFW/NSFW option? Because I don't see the problem with barely dressed women if it can be censored and they also shouldn't first trust someone who says they are the true author of a game and then the publisher, they should have asked for proof and only then inform you about this. I hope you will change your mind because it was always more convenient for me to play these games on the phone, I only noticed today that they aren't on google play anymore because I was recommending them to someone, most people, like me prefer to play VNs on their phones
Top

It's not about changing MY MIND - they BLOCKED ME. I can't do anything! They even warned me to not open another account. If there's someone, it's THEM that should change their mind, so you should complain to them, not me.
The only thing I could do is see if I can get the Android versions on itchio, where I'm sure nobody would censor my stuff like that. But I have more urgent things to do right now like finish PS2...!
Top

I complained to them about it, maybe they will change their mind. I am sorry that things like these happen
Top

Thanks, but sadly I don't think will matter - they're very determined on this front. They use automated software I think, because for example they suspended PSCD and showed a screenshot with the uncensored images - that they NEVER appear on mobile, but are still present inside the app bundle (because on PC you can choose). But still, for them was enough. Nothing worse than censorship done with automated software which are many times wrong.
Top

So because something uncensored is in the game files but doesn't appear in the game they can suspend the game? That's BS
Top

Good riddance. They clearly don't want you on their storefront, you've done everything you could to comply with their prudish outlook. I'm sorry you'll miss out on revenue from Google sales, but when they don't want you there in the first place I'd say you've been saved from all the future headaches of dealing with them.

If they're so afraid of the human body, I see a lot of Japanese gacha games they should be cracking down on before pouncing on a small indie dev...
Top

Yes of course I was only "unlucky" to get caught, I'm sure there are other 10000 people doing "worse" stuff than mine but got away... and thinking that all it started only because I wanted to update the old games lol. If I didn't touch them they would be all still there. Anyway if not today, some other day.
I'm thinking what to do about it, but for now I have already a lot of other things to do, like finishing Planet Stronghold 2!
Top

So they rejected my appeal but at least in that email I got some more info. It seems that the dangerous images were from Bionic Heart 1 & 2, and are the ones below: 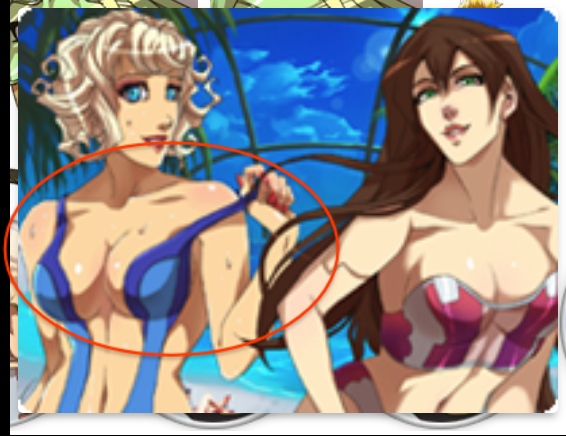 in summary just to be more precise:
- all the cleavage and bikini were wrong to show in the game page, but were OK (I think?) inside the games
- the last two pictures above instead, they weren't allowed at all in the apps

What happened is that I removed that picture in the game and resubmitted, but I forgot that it was also reused as thumbnail in the "gallery screen" (where you can see achievements and replay scenes). Which means that counted as twice, and probably triggered multiple violations.

At this point if even such tame (for my country/culture) images aren't allowed, at least I understand the ban more, since aren't just cleavage/bikini.
It's probably for the best that I don't do mobile ports, since I would need to strip down the original games so much that would be a lot of extra work! And on the next time I was updating Loren, it would have get banned too since there are similar pictures even in the censored game.
Top

Sad about this as most of my time with your games has been on my android tablet but I understand. Hopefully the games I have will continue to run, but given prior android updates I'm afraid they'll break something at some point. Will try to repurchase on PC when I can afford to.
Top
Post Reply
18 posts