I'm looking for feedback on which RPG system to use. The result of the poll won't determine what I do since there are other factors in play (for example my ability to actually code an ATB system!)

but I'll take into serious consideration of course.

In case you don't know what ATB means/is, I found this link which is quite useful:
http://finalfantasy.wikia.com/wiki/Battle_system

Some info about the game:
Basically in the game there's this map, and without going too much in details to avoid spoilers, you'll need to fight battles from each "elemental region" in a progressive level of difficulty. As you fight battles, you get access to more powerful minions.
The game characters never take part directly in the battles. They act like the Heroes Of Might & Magic heroes: they summon minions and also can use skills/abilities (like spells). The minions can level up, but differently from traditional RPGs, you can summon more than 1 of each type (with some limits due to mana cost).
So for example you could summon 5 Will'o'wisp (the cheapest Air creature) but maybe only 1 Black Dragon (one of the most powerful ones).

Currently I'm more inclined to go with the Pokemon-style game myself. I think could be different from my other games, and if I go with tag-team battles (you can replace dead creatures during the fight) it could get very interesting from strategic point of view

So after a short Christmas break I'm back on this

I think I have a good idea about how making it. Of course, since there are 72 different creatures (12 for each elements x 6 elements) I cannot have many skills for each one. I am thinking to go with 2 abilities (offensive/defensive), which would mean already 144 different skills (ROFL). Plus there should be the actual heroes abilities (luckily there are only 6 heroes for each element!).

I think will go with something of a mix between the first two. So, turn based, but with the main difference that you can summon new units on the battlefield anytime, as long as you have enough mana (of course this will be balanced). Like in a card game, the game will end when the main hero reach 0 HP. Since you'll be able to bring a companion with you, maybe I could do an interesting thing and have two targets, when one reach zero you can't use spells/creatures of that element anymore, it could add a bit of strategy

In practice think like the usual RPG combat, but with creatures that can be killed and resummoned, and two hero targets on each side. I think this way should play already very differently from the other RPGs and not require too much extra work! This will probably be one of my "last famous words (tm)" moments

I would like something along the lines Heroes of Might and Magic. I like the element of space control and it would open up more possibilities when it comes to designing skills. In addition to damage, buffs, debuffs, and healing, you can also go for abilities that affect positioning of your allies or foes. Traps, impeding barriers, leaping over obstacles, or pushing opponents a few spaces away, are few examples at the top of my head.
Top

Yes but that would require using a combat map/grid... while the new framework Anima is working on should support it (in theory) I don't think I'll manage to use it for this game. Anyway, we'll see 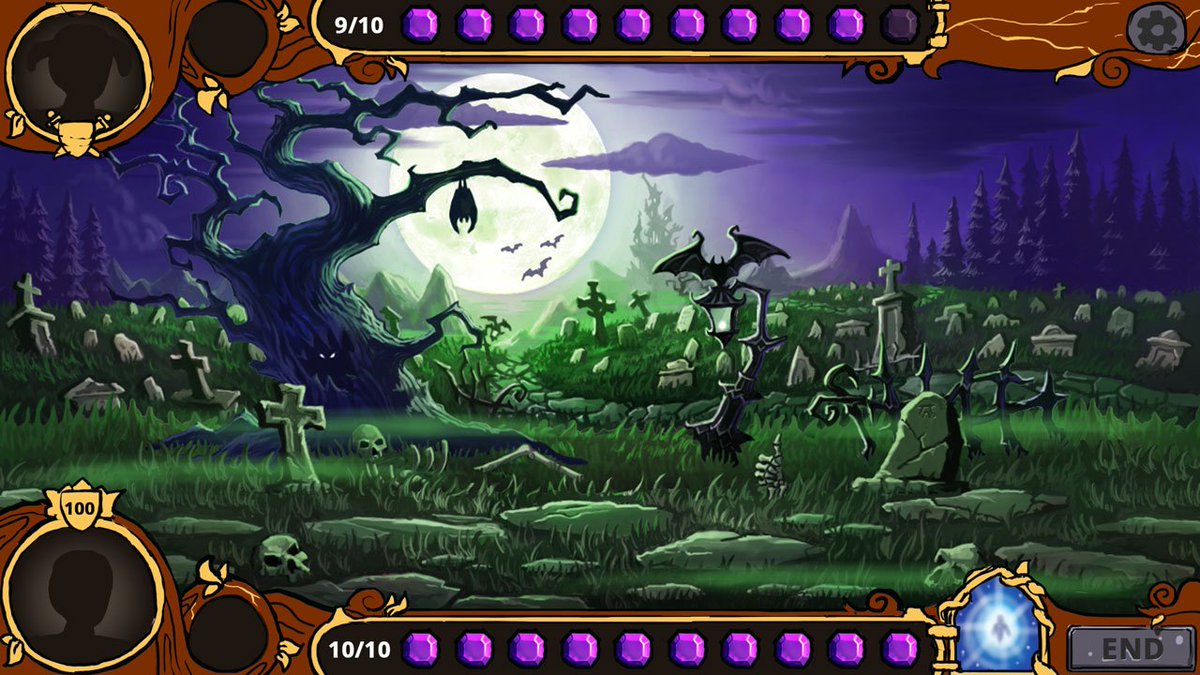 preliminary sketch for the battle GUI

I think the main issue will be showing the creatures/units to summon. I wanted to display both yours and enemy's in much bigger images (since the art is very nice) and max 3 or 5 each side. So summoning would work by clicking on the bottom-right icon, but then I'll need either to open a new window, or a list or something... damn that will be the toughest thing to do in this game

W/ art like this, Jack, I'll get the game no matter what.

Reminds me of "The Nightmare Before Christmas"--I'm in!

Thanks. Thinking that those backgrounds are... 5 years old!

Jaeger wrote:I would like something along the lines Heroes of Might and Magic. I like the element of space control and it would open up more possibilities when it comes to designing skills. In addition to damage, buffs, debuffs, and healing, you can also go for abilities that affect positioning of your allies or foes. Traps, impeding barriers, leaping over obstacles, or pushing opponents a few spaces away, are few examples at the top of my head.

I would like to second this, if not for UL then maybe for some future game. I was always a fan of games like those.

That said as someone who is here for a story as long as I like characters/setting/plot and there is GxG I will get a game no matter what a gameplay is.
Top

I like that kind of games too, but the main problem is the AI - since it's not just a matter of who to attack, but also how far to move, consider the area of effect of the attack/spells, etc.
I think would be a real nightmare to code... even if I wouldn't be the one coding it for sure

Truth be told, most strategy/tactical games don't have an amazing AI that can pose a threat to a good human player on equal terms. Usually, they rely on resource advantages like greater numbers and favorable starting terrain to gain the upper hand.
Last edited by Jaeger on Fri Jan 13, 2017 8:57 pm, edited 1 time in total.
Top
Locked
19 posts