Haha yes, and originally it was even smaller! I will do an alternate font/background mode

Good news, I have just coded a new version of the dialogue/font which is much bigger and more readable. I have added an option to use the old look or the new one at beginning of the game: 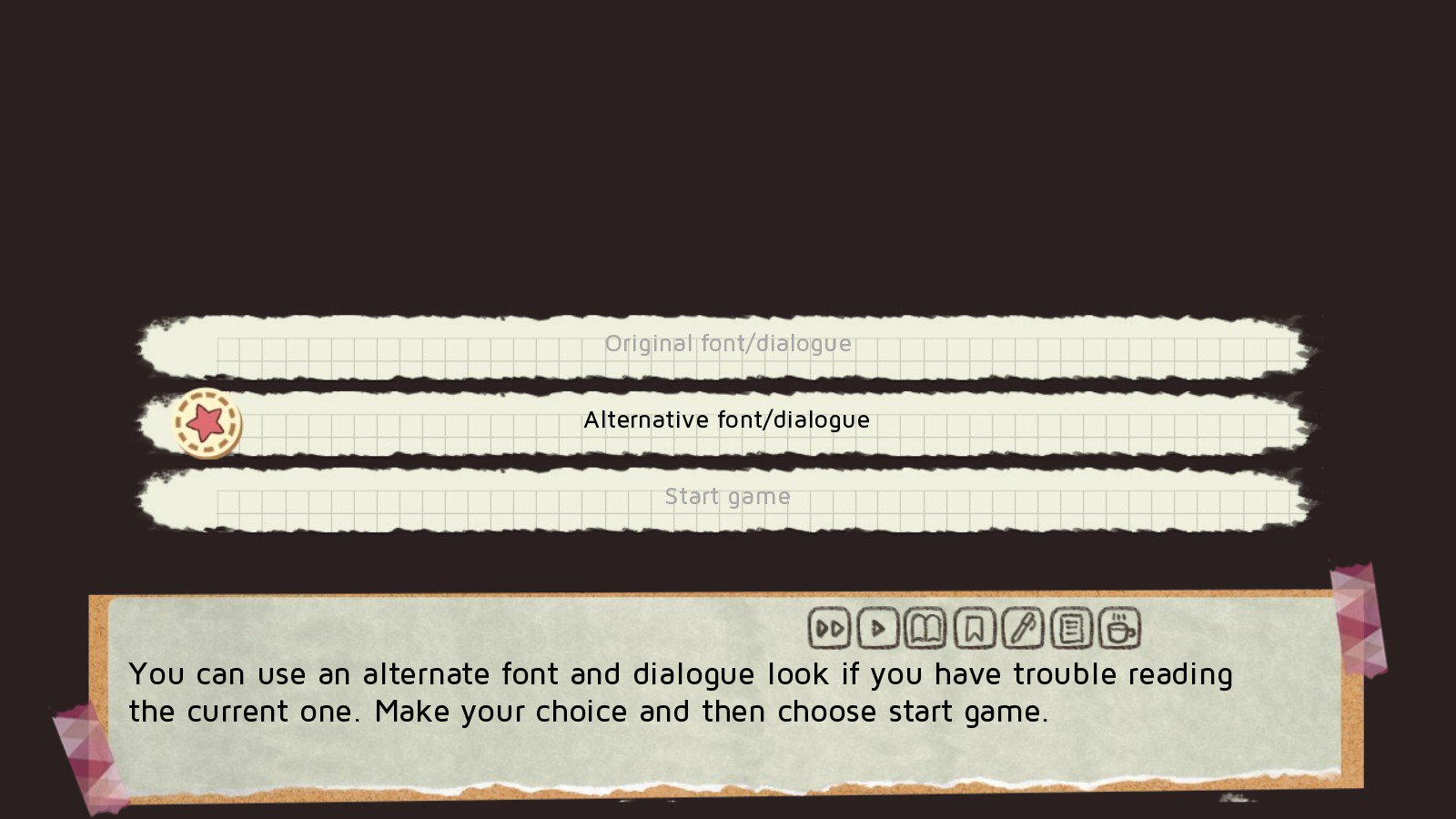 I think will also add a button to switch it on/off anytime during the game.

As for the night backgrounds, I found the issue: it happens if you choose the volunteer job in the afternoon (starting from week3). I told the coder/writer and I'll wait for them to fix this problem too before doing the new version!

I just uploaded version 0.9.1, see the first post for the changes. Thanks for the bug reports, also I think the new style while is not as "cool" as the first one, is much more readable (I even made the font bigger!). Let me know The game expects different pattern as answer here so it will announce this is a failure, but as far as I can tell it fits the puzzle rules, and as such is a valid, if alternative, solution.
Top

I'm still busy with my first playthrough and loving it so far! I was seriously considering archaeology as a career path during high school (maybe there are a lot of people like that), so this feels like treat (^_^)

Writing, art (characters and background) and music is all good! And I really like the design for the menu. The mini-games are generally fun, although I like the excavation game more. The cleaning one sometimes ends up feeling a bit tedious, and may have more to do with the number of objects you have to clean in a session (although it doesn't really take that long to clear the mini-game, especially as you get used to it).

Here are a few potential typos and the like:
Spoiler:
Just a suggestion concerning the wording of the font choice at the beginning of the game. Maybe instead of "if you have trouble reading the current one", use "if you do not like the current one" (or you could leave that out completely and just tell the player there are two choices for the font). This is just something I was taught with regards to interacting with people and clients, although it wouldn't have been the intent the former ("if you have trouble") may give the impression of "there is something wrong with you", whereas the latter ("if you do not like") would hopefully give the idea of "it depends on how you feel". This may not really be a problem for all cultures, and it actually didn't bother me (I just had that thought when reading it). Maybe also mention something about being able to switch between the two fonts any time using the Font button?

winter32 wrote:The game expects different pattern as answer here so it will announce this is a failure, but as far as I can tell it fits the puzzle rules, and as such is a valid, if alternative, solution.

I initially solved this same puzzle differently as well:
Spoiler: In case the appearances of the puzzles are consistent throughout the game, this was the puzzle from Week 3 Monday. Interestingly enough, using the mouse wheel to scroll back "the history" (this was a save game I loaded, so I was hoping to take note of the week and day) too much here, causes the "End of Free Trial" to appear. I am guessing the trial ends at the start of week 3? I don't think it is a big issue, since not many people would scroll here, but figured I would mention it. I actually found this kind of amusing

It may be related to the above, or I'm just not that good at these types of games, but I remember 2 excavation mini-games on the larger grids where I would be able to solve a big portion of the puzzle, but trying to solve the last section would be more trial-and-error, since it felt like there could be multiple combinations that would work. (The last few rows/columns that I had to solve were generally denoted by "1,1,1" or "2,1,1", i.e. small numbers and too many squares still open). If it's actually something of note, I'll take screenshots if I run into them again.

Still enjoying the excavation mini-game though

Thanks for the typos, will check them today. As for the puzzles I told the writer since she designed them

Yeah I'm on the objective "Trowel" cave puzzle and there isnt enough data to complete it properly, which kinda saddens me. I like the idea of being able to solve these puzzles through logic instead of guessing and checking or HAVING to use a hint. There's too little data for 15 x 15 squares.

PS: the game is fun/cute/charming and I definitely enjoy the minigames.

You know. Maybe I just need to focus more on 'completing the picture' and less on using pure logic to answer the puzzles.

Kitty just sent me a new version of that puzzle:

will show up when I do a new update (but I'm waiting to see if something else shows up first).
Top
Post Reply
84 posts