another iteration, this time I think is final. Added the display of the HP/SP on the small portrait sides like the good old RPGs

A small suggestion would be to somehow highlight the words to indicate what submenu you are looking at. For example, if you are looking at the Attributes submenu, "Attributes" would could be boxed, bolded, a have glowing effect, or simply a different color.
Last edited by Jaeger on Mon Sep 02, 2013 7:18 am, edited 1 time in total.
Top

Cool work on the aesthetics. I let the others remaster it

Hah, honored you consider the suggestion, and that looks fun. But it did fail the address the class stats preference. I'm looking at the Str and Arcane statistic. Ask yourself, why would a Warrior pick Arcane, or a Wizard pick Strength?

Perhaps an opposite only effect? Such as increased critical chance and damage, for Wiz - Casters, and for Attackers, the Arcane stat might improve healing received or even further improve status resistances. Or add another effect to really tempt the player.

As is, it's stat inflation only. Although I enjoy my brain making love to numbers.

Well I wasn't aiming at making every single attribute essential for each class. But still, a mage could pick strength to increase his threshold - in practice, if they have a low value, the enemy snipers can hit and stagger him, reducing his speed, attack, defense by 20% (so it's an important effect). A Warrior might pick Arcane so he gets less damage in battle from enemy wizard elemental spells. Because even if there will be gears with resistances, you won't be able to pump them up very high. Instead with Arcane you get a bonus to ALL the resistances (Burning, Frozen, etc) which is cool.

In summary, I didn't want:
- every attritbute will have same level of impact for every class (which I consider quite hard to make honestly)
I wanted to move from:
- some attributes are USELESS to some classes
to:
- every attribute has an use for every class. Then of course there are preferred attributes, but people who wants to experiment might be surprised by some results.

But I'll talk again after some testing

For a standard Warrior of set types I'll make-

1-Two skills to focus on Strength and Agility-This is very much "Speed King". With a few bonuses to constitution from the start, you can occasionally put a point or whatnot in constitution for minor health. Other than that, you don't need it. This character will be a slayer running around like a madman with highly damaging strikes from strength and able to move many times with agility. Very much like a d and d barbarian except that he doesn't get excess health, heh.

2-Two skills to focus on-Strength and Constitution This is a brute who can deal damage, take damage and still keep going. Will need to place a point or two every once in a while in agility for speed. Otherwise reversed role of previous character and should work.

3-Two Skills to focus on-Strength and Skill Who needs luck when you've got skill? This is one of my favorite types of fighters in roleplaying games like this. Very much a finesse fighter who is excellent at surviving in battles with a simple dodge. Will start with a few choices in constitution and will place a point every once in a while. This character will be very resilient at staying alive. Very much a "Rogue Warrior"

4-Two Skills to focus on-Strength and Arcane This is a cool one. With a little bit of constitution in beginning, you will have a strong warrior who is good at taking magic attacks. Mageslayers are extremely dangerous as they are a mages worst enemy due to resistance. A little agility will make them even better.

There is no reason to use strength/will as a combo as that would be stupid. Still much more useful as a stat tree than previous one. Im hoping to use a warrior again this time.
?
Top

Depends, since Will controls how many SP you have you can't underestimate it. And if special attacks are powerful (obviously they'll be), your Warrior with low SP won't be able to use them as much often as ones with a higher Will. That would be a sort of "offensive build". Remember that I plan to make this game very different in combat from Loren regardind damage done. In Loren the special attack were powerful but not that much (you could still use the normal melee attacks and do 2/3 or 4/5 of the skill damage) but here will be different 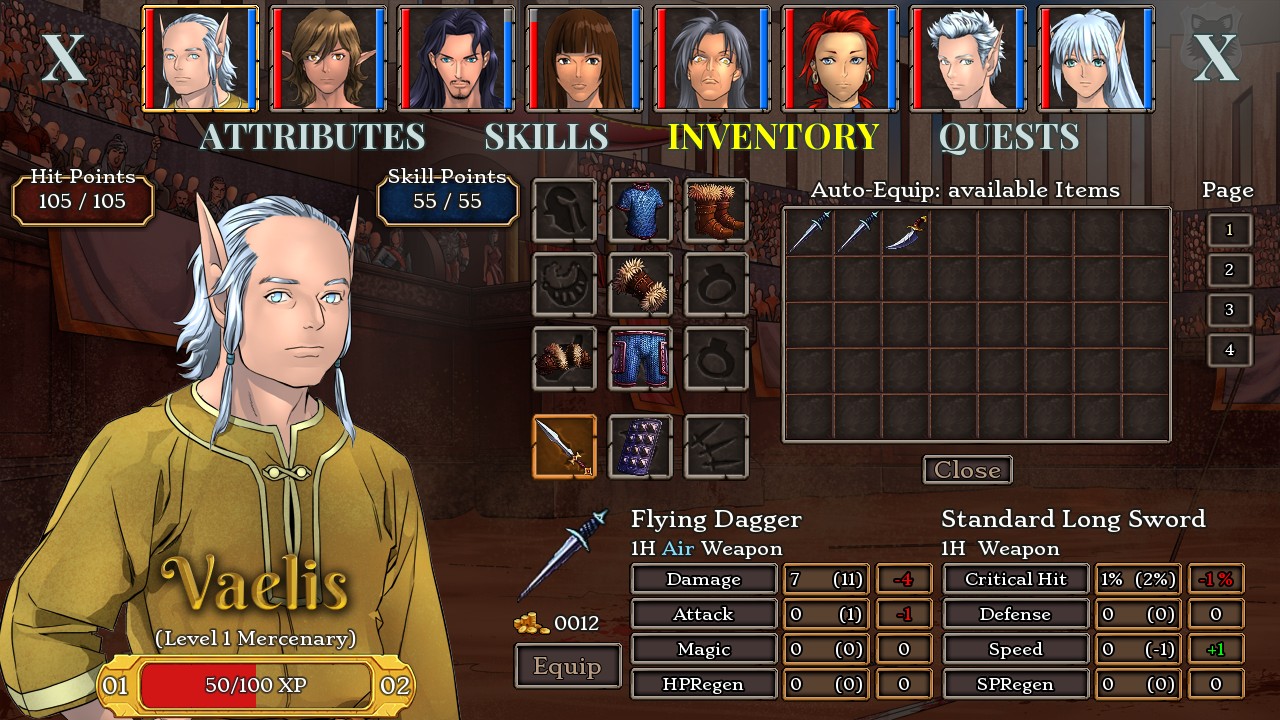 almost done with the new inventory screen layout. The only problem I'm having now is how I'm going to fit all the elemental/physical resistance stats in the armor item details... is already crowded now with just the weapons

Can you do a mouse over, overlay to show that information when you mouse over the weapon?
Top

I want to avoid mouse overs, since they slow down the game on low-level computers and also this way I can port it much easily for Android.
Well is not a big deal, I guess I can cover the left portrait worse case, I liked to have the big image of the character always present on the left, but maybe better not be fixated with such things