Update!! I have now a full colored hand-drawn map and it's BEAUTIFUL! 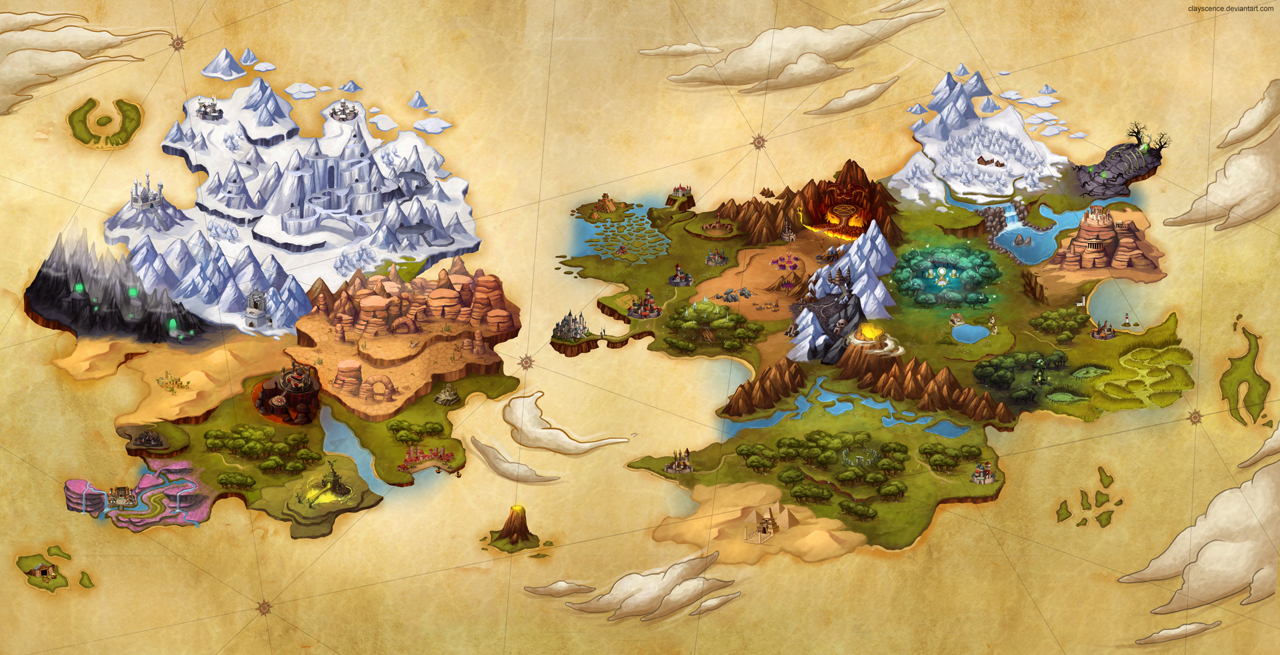 Of course it's very zoomed out - so it's not like it will match exactly the games: for example if in a game there are mountains nearby a town, or such things, it doesn't necessarily will be displayed in the map since could be a small mountain chains, etc. I will probably move Dingirra a bit east since should be in middle of the desert. Small adjustments like this, but overall I think turned out GREAT

Events timeline
There's also a timeline of the events/games that I'll change as I make new ones (this one is work in progress too):
http://aravorn.com/index.php?title=Timeline

Geography
Aravorn is divided into two main continents, Zoltar on the west and Issanis on the east. Other minor island might be present, as well as some uncharted territory

but those are the two biggest continents where most stories will take place (not necessarily at the same time).

Is the most populated continent. Includes some mountainous and desert areas, but in general there's abundance of plains, grass and very good places to establish towns. It's mostly under the control of the Human Empire, with its capitol city Grimoire. While in Grimoire most of the population is Human, and in Grandtree is elven, in the towns of Triberg and Icesilia there's more space for other race/cultures, especially after the events of Loren's game.
Icesilia is nearby the sea (probably should have moved the text more close to the coast) and is surrounded on the west by the dense forest of Howlgrove, where it is said that witches and other mysterious creatures live.
Triberg is a town thriving with commerce and arts, thanks to a very different philosophy from the other human towns, more open to novelty and other cultures. Is the most rich town of the eastern continent despite not being the capitol of the Human Empire.

Zoltar
The western continent is much less hospitable. It has good part of the northern region covered by a permafrost, with a big mountain chain to divide it from the southern region which is made mostly of desert areas and barren wastelands. There are a few exceptions of course: the town of Dingirra is a big commercial center, with a big arena where numerous fights take place. Slavery is widespread there. The town of Ninim is a small village in the northern part of the continent, where almost nobody dares to travel.
New: on the coast of Zoltar lies the city of Shacklesplit, founded by escaped and freed slaves - a safe haven from Dingirra.

Population, races, cultures
In Issanis, there's a big mix of cultures and races. There are humans, elves, orcs, lizardmen, goblins and of course, demons.
In Zoltar, the northern region is almost entirely populated by snow elves, with the exception of a few human outposts. In the southern region, there are dingirrans (a race similar to modern arabs) and centaurs who inhabits the barren wastelands. Of course, small outpost of most races are scattered through both continents, so you could find orcs outposts in the desert of Zoltar and snow elves in the mountains north of Triberg.

Racial traits
Humans - identical to the humans you know in real life about everything. Well, except that they can learn killer moves with bizarre weapons and use magic!

They are an all around race capable of becoming skilled warrior, thieves or mages. They can extend their lives using magic only, but is very rare/difficult.
Elves - As the classic mythology says they live in forest, with houses built over/under/around big trees. They're best known as missile weapons experts and magic users. They live much longer than humans, average life is 600-700 years. Some Bards do the so called "century journey" to compose their ballads (as seen in SOTW: Jariel character)
Dwarves - They live in towns or mines built on the side of mountains. They're excellent fighters thanks to their innate strength, constitution and resistance to magic. Some of them are also alchemists or mages. Like elves they live much more than humans.
Demons - Bloodthirsty creatures, usually they have tails and wings though some of them possess shapeshifting capabilities. They're evil by nature and have a natural predator instinct, though with the course of years things will change (see Spirited Heart demoness).
Dark Elves - Half elves, half demons. During the first hundred years, the elves rejected them as they were a mistake of nature. Was only after Myrth became an Elder Druid that they were accepted again in the elven society and in the human towns, though episodes of racism and diffidence still surrounds them. Like the normal elves they can live hundred years, and they all are born with innate magic abilities and sometimes shapeshifting skills.

Calendar
In Aravorn there are four seasons, named: "Hibernia" (Winter), "Floreas" (Spring), "Solaria" (Summer), "Arboris" (Fall)
Each one lasts 100 days. So there aren't separate months names, but a date could be for example: day 75, Solaria or day 99 Arboris and so on.
As for years, they started counting them since Grimoire, the ancient human town, was founded. Though I haven't set any date for Loren yet

Traveling
As already seen in Loren, followers of the Dark Magic (for example Chambara, Grobb) are able to teleport themselves to far distances, albeit teleporting from a continent to another is a much difficult task because of the frequent storm on the sea between the two continents that interferes with the magic.
The population of Dingirra has learned to use magic portals, which lets them travel from a place to another, bringing with them caravans of goods to sell, so not just themselves but they're able to teleport objects through the magic portals. However, building a magic portal requires time and precious gems as catalyst, so they're mostly used as a way to do commerce because it's very expensive.
There are of course more common way to travel like boats, horses, and by foot

Issanis is where most games took place so far. You can recognize the shape of Loren's map, with the Amazon Citadel, Grimoire, Grandtree. There's also Triberg, where Spirited Heart takes place, and Icesilia where Amber will take place.
Zoltar is so far unexplored in my games, but Seasons Of The Wolf will be set in that continent. Queen Of Thieves will probably take place in yet another town on Issanis though I have yet to think where.

Phew! hope I didn't forget anything

I can't believe I have overlooked this post for more than a week!

Lonestar51 wrote:the town of Dingirra is a big commercial center, with a big arena where numerous fights take place.

You (or Taleweaver) will have to think about how people will travel and more importantly move stuff from and to the town of Dingarra. Without proper logistics an comercial center is not easily possible. In an medivial setting this would mean a big river, as the town is far from the coast. Streets (think roman empire) would be possible too, but expensive to maintain. Of course, magic would be possible as well.

Anyway, whatever you decide, it has some influence on the rest of the game. And of course, you will have something to add to the map.

Yes I covered that, under "Traveling":

jack1974 wrote:The population of Dingirra has learned to use magic portals, which lets them travel from a place to another, bringing with them caravans of goods to sell

so that's why they're such a good trading place, they can travel all around the world. Even if opening portals is expensive, they're rich and every time they bring caravans with lots of stuff to sell so for them it's worth it

Oohh..I didn't even know this page existed. This looks neat and I actually read almost all the text. So you got 3 games setup for that world with 1 already completed. Im hoping although I doubt it will exist that certain characters will hear tales of previous adventures but NO cameos. Just mentioning people because that shows that events are actually happening outside your backyard. You shouldn't go overboard but agree with me on this-If drizzt saved Icewind dale with his party, he should at least get some recognition/folklore of his tales in other close lands.

This happened with Knights of the Old Republic 2 with Revan in the beginning. Its not big but references prove realism and that people know whats going on. There's nothing worse than the old-"Oh I don't know, some fool named fost started a rebellion. They got em. How'd he go? Well he was about as cowardly as Saddam. What'd ya expect when he's made of chainmail.
?
Top

And Jack1974 added a couple events from references in Spirited Hearts 1. I would love to see a game set in the time frame ^_^ (especially as it tied into Loren 1). This comes from the Aravorn wiki, which is still a work in progress.

250 to 300 –A group of elves starts the excavation of The Golden Orb, an artifact that could help them win the battle against humans
301 – Because of the excavation, an ancient tomb is opened, freeing Mother Morte and her army of undeads. The elves manage to defeat her but not kill her. She hides somewhere in the underground.
606 – Orcs attacks Dwarven town of Hammerhand. Ramas and Dora fight for the freedom of their people.

(Spirited Heart referenced the Battle of Eden, which is 301)
Top

Yes I'm planning a game during those years, but obviously need to finish all the one in progress first

Wait a minute, did Dora and Ramas actually met before the first war?
Top

Hmm my idea is that they fought "together" but not close, I mean they fought the same war, but in an army of dwarves so not necessarily meeting one by one. But maybe I'll change that since could lead to problems

You know, when playing through these games, I always imagined most of the cast being in there twenties or so. Never realized Amukiki is (assuming he become chap at twenty, impressive as that is) in his thirties. And Dora and Ramas are old.
Top
Post Reply
105 posts