Jack, if the enemies try to flee the battle, could we still pursue them? Or we could have the option to spare them after a battle was won(this is so like Undertale for some people, but I actually saw this in a lot of games besides it, so is not something that only Undertale had), and some enemies could try to attack us again or gave us random itens/money. They might even tell us information, and hat would be so cool!
Top

I too am curious about dialogue/social skills against enemies. The Shin Megami Tensei series and its spinoffs have something like that, although the questions and answers don't always make sense.
Top

For the boss battles will be possible to "defeat" them talking (probably except the final fights but writer didn't do that yet). However you still have to fight/survive (there are several "rounds" of talking before the enemy boss COULD surrender). For the regular enemies, there can be various effect but of course won't be as detailed as the boss fights (otherwise would be too hard to have custom dialogues).
The morale bar will also play some role, for example I'm planning to trigger some effects like if it's very low, random enemy could "panic" and not attack for X rounds, or (similar to what happens in XCOM) could go berserk and get a boost on speed/attack at expense of defense/accuracy.
I haven't reached the point where all of this works but I think could be interesting since would also add a bit of randomness to battles, making them less predictable

Another day, another iteration: 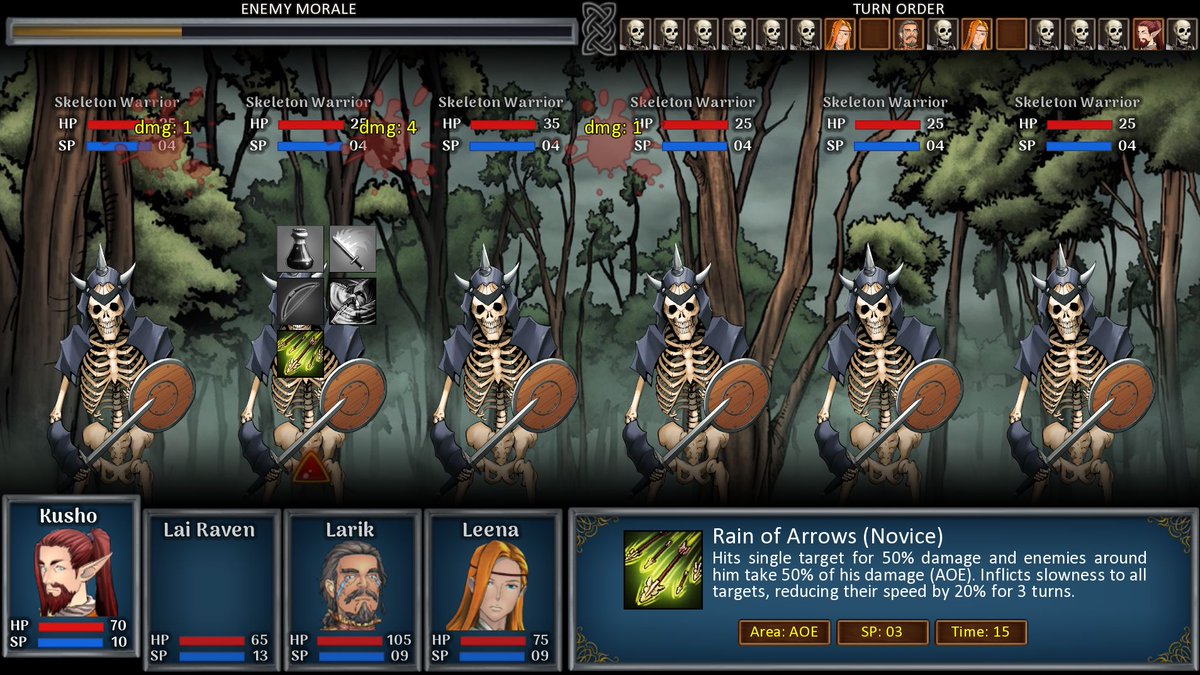 since one talent of the "Envoy" (that's the Class name for the protagonist) is to discover more info about enemies, by default I'll hide all their info except for the HP/SP (otherwise I think would be too hard).
But you won't know their speed,attack, etc unless you unlock the talent. That talent is basically a passive skill, so once unlocked you'll see the full enemy info for all enemy types

Why would you ever pick that? (Assuming it costs a skill point you could have used elsewheere.)
Top

I'm not sure yet if the protagonist's talents will be like normal skills or a separate thing, there are 4 categories with 4 talents each, so 16. Then the protagonist also has 15 "normal" skills. I could unlock one every 2-3 levels or maybe since they're quite powerful even every 5 levels.
But in any case I could also add something like add +1 damage when fighting all enemies of an "examined" type. Like you examine a skeleton once and then you get +1 damage permanently, or something like that, to make that skill more worthwhile

I guess I understood, the player would have learned the weakness and ways to proper battle the enemy, thus, getting a bonus while fighting the same kind of opponent.
But getting a skill evefy 5 levels? Isn't a little high? 3 or 4 is better, since there is like 16 to get, and I don't know about other players, but I love grinding until I get all of them(I'm weird like that xD).
Top

Only the talents, which is a sort of skilltree unique to the protagonist, since are quite powerful. The other normal skills would be like 2-3 levels (same as SOTW).
Top

But, if the player is a grinding addict like me(XD), could we still get all of them? Please tell me that we can T____T
Top

I don't know yet, have to see how powerful they actually are in the battle