They would be optional indeed, so not required. And not easy either

I prefer to allow the choice to the player (for example if someone likes a specific Class in the RPG, but doesn't care about the character), but make it quite hard (more than normal quests).
Top

Troyen wrote: I actually think you should leave them out. It'd be different from your other games and it's a reason to replay the game - retry the story with alternate points-of-view. And it keeps the party from growing too large.

(Plus, if there's a character we really dislike, we can leave them out without negatively impacting our party power. "Optional" rescue missions really mean "do this if you don't want to fall behind on XP/Gold".)

I agree, it seems to make it more important, and while "bonus" missions are technically extra, it will always seem the correct way to play, especially those who view it as a "moral" decision. It also adds variety. Making the romances available (or telling them they are a romance(?) seems enough and adds replayability.
Top

Well since the "rescue quests" will be independent, for now we won't write them then, and focus on the main story. I'll see if during beta I get another kind of feedback

The main issue is that it would limit the classes, for example if you pick both Galan, Kusho and Amukiki, you would have no healer in your party. But I'm thinking anyway to make the game more similar to QoT, so with limited healing anyway. We'll see, is obviously a bit too early to draw any conclusions about this

jack1974 wrote:The main issue is that it would limit the classes, for example if you pick both Galan, Kusho and Amukiki, you would have no healer in your party.

Times like this you need a manual or instruction set, so people will know that having unbalanced classes may lead to huge challenges within the game! Or people can find out about it the hard way, like those who went for an all-rogue/warrior party in Dragon Age Inquisition with no mages/classes they didn't pick, to their dismay realize you do need their skills and the class itself to overcome a few quest obstacles.

Yes, or I can balance the game so that no specific class is absolutely required

Worse case I could allow healing potions again. But in general if the healing is going to be like in QoT where you can't "spam healing", then even having a healer Class is not as important as it was in Loren/SOTW.
Top

As far as Inquisition, classes were actually needed to continue some quests because they had exploration skills, including warriors/rogues/mages, any class left out could hinder a quest (and in one all 3 were needed to complete it), but it totally was possible to beat things with all one class, so as long as Jack doesn't have a "must have healer to get past dungeon" we should be fine.
Top 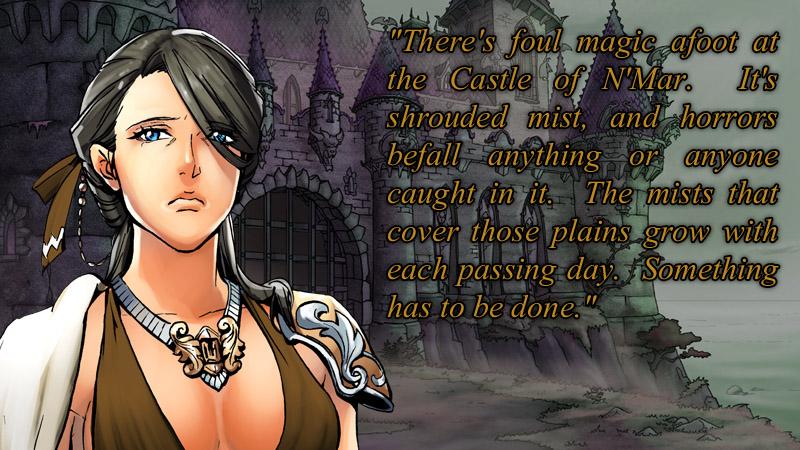 and what she says. One sentence is above. Another epic one is this dialogue between her and Grimoire's council:


council leader "How is it that you came to know this?"
karen "As I said before, the growing mists around N'Mar are a growing concern for the Amazons as well. We have been flying surveillance missions over those fields for many moons. All, of course, to further the shared interests of both the human empire and the Amazons' domain."
council leader "Why did you not relay this information to the council?"
karen "My people have reported everything we know to the council through proper diplomatic channels. If that information failed to reach you, you have only your own bureaucratic inefficiency and political idiocy to blame."
"People around the council chamber begin to murmur."

She's quite blunt. Definitely now I see where Loren caught it from!

Tell me that Valerie the Vampire is in this one too and you'll have me sold right there. Her reaction to Mesphit in the N'Mar expansion for Loren was priceless!

And yep, I can see that Loren is certainly a chip off the old block...
Top

Hmm Valery... I didn't think about her, but there might be a cameo or something. A "problem" when making this game was to not break what happens in Loren. For example, Karen knows about N'Mar, and it's good because in Loren game she says it. Same for Apolimesho.
However, I had to be careful, since they don't know the castle. Indeed in this game, both Karen and Apolimesho aren't recruitable in the party. Otherwise, they should be familiar a bit with the castle, being there already (obviously, being there once doesn't mean they know it by memory, but still).
A lot of small things that I had to catch, another example I initially included Rei, but then I remembered that Rei and Amukiki met for first time in Loren. So wasn't possible to have them both (even just as party members) in this game. So I picked only Amukiki because it also ties with the fact that he became a gladiator after the events of this game. And so on. Had to do some "research"

edit: lol and now I just checked the Amukiki's personal quest in Loren, and can't work with what happens in this game. Well, not a big loss since he wasn't romanceable anyway! I'll find another Nomad to replace him then.
Top

Valery and Zachary don't appear outside the N'Mar expansion, so there isn't a whole lot of game text needing to be checked, and two years ago I could probably have told you everything that was in the game about them. lol. Unfortunately my memory has since fogged over a bit and my saved games were lost in a hard drive crash. It certainly makes sense for them to be involved in the story somehow since they take over the castle once all this is over.

I'm trying to recall if the game related whether Zachary had turned Valery or if she was already a vampire when they got together, but I'm drawing a blank. I'm also drawing a blank on just how old the two of them are. There are quite a few interesting permutations on how these two could potentially be inserted into the story depending on the answers to those two questions. Meeting a still human or perhaps single vampire Valery would be rather intriguing. Perhaps she flirts and whimsically starts getting involved with the MC only to drop him/her for Zachary in the very next scene. So it wouldn't be a real romance. And even if the two vampires are already paired, there is still a great deal of room for fun banter or even negotiations of the sort that took place in N'Mar, ie. the MC wants something from the vampires, while Valery wants a sip from the MC or perhaps a companion that has caught her fancy in return. lol.
Top
Post Reply
91 posts