The time has come! Let's all embark on a great journey, a Summer in Trigue!!!!

- in a specific case even if you know Grace was fired, the next day Sybil at breakfast would wonder where Grace is
- fixed wrong reference to Shiori dress in the hotel lobby

- changed a value on day8 so that if you call Mia the day before you always get the choice to go with her (even if you're also pursuing Shiori).

- Fixed: If you get angry at Grace on the beach the first day, then the first evening will loop and play twice.
- Fixed: if you break Grace's romance route, but you still go living with her, and Shiori has higher relationship than Liz, you trigger Grace's romance ending
- Fixed: you could break Shiori romance and still go on posing for her
- Tweak: resized the scuba diving CG since might cause issues on older computers
- Tweak: updated to the last Ren'Py stable version

- in Grace route, if you didn't met her on Day 7, she will tell about her plans to adopt a kitten as you get to her apartment
- fixed wrong Alex clothes in her final scene during concert and after
- fixed the writing issue with Shiori so that Sybil always tells her that she's a writer (but if you don't pick that choice you get no relationship increase)
- disabled Shiori path if you never go strip for her since several of her scenes are dependent on that scene

Happy to have finished this and I must thank Fencayne for working hard on this game while I was still burned out last year. It's the same writer of Volleyball Heaven but don't worry, Lana is not present on the fly to Trigue

Bug reports: interested in anything you find, from typos to wrong background etc. I checked it but is more complex than it seems so I might have forgot something along the way!

Please note that the game has several branching points: some routes, like Shiori, are much shorter than others. So don't be fooled if you do that one first, there are several main events that you'll miss.

I have made a walkthrough for the game and I'm posting it here for you, lazy players

GRACE ROMANCE
-----------
Grace the clumsy waitress romance is probably one of the easiest since you interact with her multiple times during the game.

Spoiler:
Choices list
1) When you bump into her after breakfast, pick "I willed myself calm..."
2) When you decide what to do the first night in Trigue, pick "Go to the hotel restaurant"
3) Don't call Mia since going out with her first date will lower Grace relationship
4) When you met Gregor, think about Grace
5) Staying in the hotel, pick option "Apologize to Grace"
6) after meeting with Alex back in the hotel pick "An evening with Grace..." and later in the scene pick "Yeah, maybe I should avoid making yet another enemy"
7) on next choice pick "Go see if Grace has gotten off work...", "Go find Grace in town" and then "Yeah! I love cats!"

when deciding where to go after the hotel, obviously pick "Call Grace"
9) while waiting in queue to leave hotel, pick "Except...I wasn't altogether sorry things were keeping me here..."
LIZ ROMANCE
-----------

Liz is the "secret romance", even if it's not much secret since there are achievements for it

Choices list
1) When you find Liz cheating in the first scene, pick "Remain calm..."
2) When you decide what to do the first night in Trigue, pick "Stay in room..." (gain +10 relationship with Liz, hidden)
3) When you met Gregor, think about Liz (gain +10 relationship with Liz, hidden)
4) If you didn't call Mia, and you never met Shiori, the next scene should be the apologize to Grace, and you'll get another Liz points increase (gain +10 relationship with Liz, hidden)
5) after meeting with Alex back in the hotel pick "Forget it - I'm not fit for human company..."
6) when Sybil ponders how often she's thinking about Liz, pick "All the time..."
7) on Day7 there's a big menu choice with several options, "go strip for Shiori again" (if you're on her path), "Call Mia", "Walk into town", etc. The option to pick here is "Hang out by the pool"

when deciding where to go after the hotel, pick "Call Grace", you can still stay with her but be friend only and unlock Liz romance
9) while waiting in queue to leave hotel, pick "I wanted to get back to Cali and sort out my life..."
MIA ROMANCE
-----------
Mia the adventurous girl likes puns and is one of my favorite character design/personality (strong, determined, etc).

Spoiler:
Choices list
1) When you decide what to do the first night in Trigue, pick "Explore the town"
2) in the scuba scene pick "About the volcano trail..." and then "Mention her dictator relative..."
3) When you discover about missing stuff, pick option "Call Mia"
4) When you met Gregor, think about Mia
5) On Mia date, do the slow dance with her picking "No Way!"
6) On next big menu choice pick "Call Mia" again
7) When in car with Mia, pick the first option "Looking forward to another day of adventure, Mia!"

when deciding where to go after the hotel, obviously pick "Call Mia"
9) when you got out with Mia at restaurant and asks about Liz, pick "Yeah..."
10) while waiting in queue to leave hotel, pick "Except...I wasn't altogether sorry things were keeping me here..."
11) at Mia's cottage pick the option "It's over!"
SHIORI ROMANCE
-----------
Shiori

Spoiler:
Choices list
1) When you decide what to do the first night in Trigue, pick "Explore the hotel" and in the choice pick "Agree..."
2) the next day pick the option "See Shiori", and then pick "Your family's very wealthy, then..."
3) When you met Gregor, think about Shiori
4) Staying in the hotel, pick option "Look for Shiori"
5) When Shiori offers you the job as model, pick "Uh, Yes!"
6) after meeting with Alex back in the hotel pick "See Shiori"
7) in the next big choice of what to do, pick "Go strip for Shiori again" and then pick "Forget the money, I just want to make the most of Shiori..."

when Shiori asks you if you're ready for another day in front of camera pick "Of course!" and unlock the scene in which Shiori comes out
9) when deciding where to go after the hotel, obviously pick "Call Shiori"
ALEX ROMANCE
-----------
Alex's path is a bit more difficult since she appears in few scenes especially in the early stages, so you must make sure to not increase the relationship with the other characters too much!

Spoiler:
Choices list
1) When you decide what to do the first night in Trigue, pick "Party!"
2) When you met Gregor, think about Alex, and then pick "Admit it"
3) When at Carlo's and Alex ask what you do, pick "Writer"
4) When Alex confesses and asks if you can forgive her, pick "Yes"
5) In the pool scene before leaving the hotel, you should unlock her scene
6) when deciding where to go after the hotel, pick "Call Grace", you can still stay with her but be friend only and unlock Alex romance
7) while waiting in queue to leave hotel, pick "Except...I wasn't altogether sorry things were keeping me here..."

2) SHIORI: This is tricker. You need to have met her, but be living with Grace. When she comes to Annie's bookstore to talk to you, she'll leave the postcard
3) MIA: call Mia to get the second trip (up the mountain), keep the appointment (if you're also on Shiori route) and when you're in car pick "Looking forward to another day of adventure, Mia!"
4) LIZ: you'll get it simply playing her route to the end while doing a videocall
5) GRACE: pick the option "Go see if Grace has gotten off work..." but you must have followed her route, including deciding to spend time with her previous afternoon, and having apologized to her
Top

I was cracking open the script, and... WHOA, that's complicated! Remember Bionic Heart 2? This looks worse. I'm trying to map the whole script, but some of this branching is hard to follow. I just want to find the optimal way to romance as many as possible with the least amount of saves.

Yes it's complicated, but I think I "managed to make it work" (tm)

(I mean, I was able to unlock all achievements/endings playing it normally)
Of course yours is noble goal, I think in this case is way more complicated than for example Volleyball Heaven, because a certain secret romance will show up only if all the other relationships are lower than hers, so... but anyway, curious to see what you manage to do this time (and hopefully you won't find many bugs!).
Top

How does Shiori know Sybil is a writer, if I didn't choose that dialogue option? 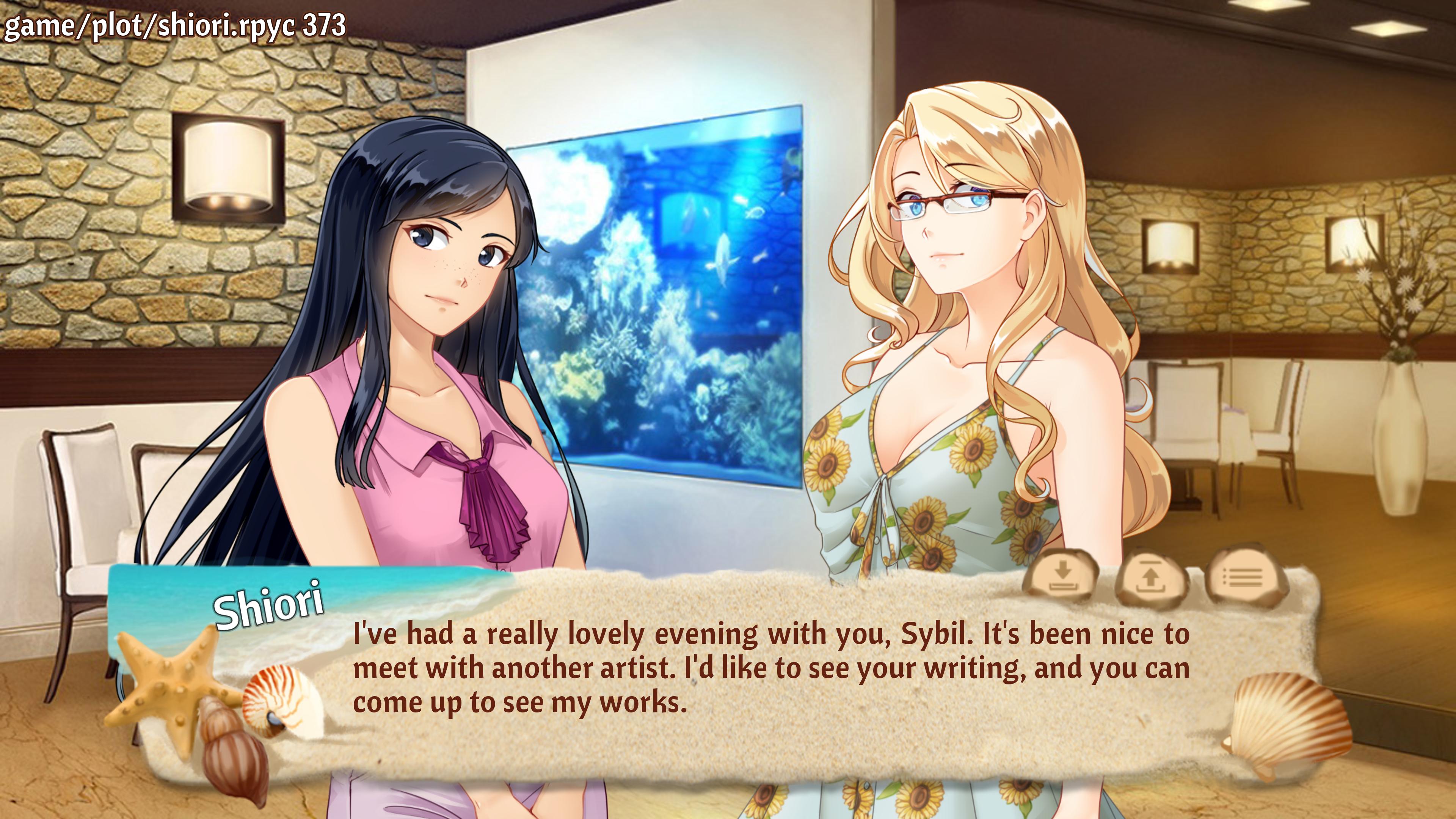 Ha! thanks, good catch. I'll need to do a tweak on that dialogue

Hey, just wanted to let you know the game's page here at the Winter Wolves website is mistankenly called "Volleyball Heaven" on the browser's tab for some reason!
Top

Ah thanks, because I copied that one and then edited it :D haha will change it now!
Top

Also, day 5, in the evening, you can choose to apologize to Grace, even if you never even saw Grace that day, and thus have absolutely nothing to apologize for. Looking at the script, there doesn't seem to be an easy fix, a lot of things hinge on whether you made that apology or not, but Grace has no reason to be angry if we don't see her that day. Seems like we need to have a Grace confrontation for things to make sense.
Top

Thanks, indeed the crash you had is also related to that. I think indeed the confrontation need to always trigger!
Top
Post Reply
67 posts