Meh that sucks, but I guess you couldn't have known that before that it would play out like that. I guess just try to see it as a learning experience and try to avoid those small mistakes in the future, they will all add up. I have made enough mistakes too, it just happens and you sometimes just have to have luck like you said.
On the other hand you have great ideas, the idea with that free play mode sounds awesome. I didn't even think about that and just wanted my cards for the story mode. Don't tease me like that.

Ah ok, I didn't know that. I don't know about the part of a story without romances. If I hadn't played other games of you before I would say yes or I don't really care, but if they weren't in I actually would miss it. They seem like a elementary part of your games especially since some people that play your dating sims also play your rpgs. Baldurs Gate II would have worked without romances too, but I guess people are somehow used to it now?
With the artwork you are however right. Its not that the artwork is bad by any means, yes some facial expressions are off but I compared them side by side and you can still tell that the artist put quite a bit effort in them. Its more like the change of style was too much and people got some kind of shock. Like when you only know your wife as a brunette and then she suddenly is a bleach blond, changes are high you won't like it even though maybe it will grow on you with time. But its your wife so you have no other choice to get used to it, not some kind of game.

And yes people are often used to a more manga oriented art style with those kind of games and maybe some would even avoid to play it if it doesn't look like that.
Well thats the spirit. I can't blame you but at least you had fun working on it and maybe you can get something for future games out of that project.
One last question, since I promised you I will buy it I will do that now, but it would be good to know if you earn more if I buy it directly from your site or if steam just steals the same amount and it doesn't really matter?
I wish you good luck in your future adventures.
Top

Thanks for the support

I meant this specific game with this art, to make it without romances, since seems didn't work well. For my other games with manga art romances is a must! But it's easy to say this now after the game is out...

jack1974 wrote:I really enjoyed doing this game though, and honestly if I hadn't so many other games waiting to be done this year, I would probably have done the DLC even at loss, because I liked it !

Oh gosh, I hope you don't mind my asking (I registered to ask!), but which of these graphs is the correct one for the romance update? This one: 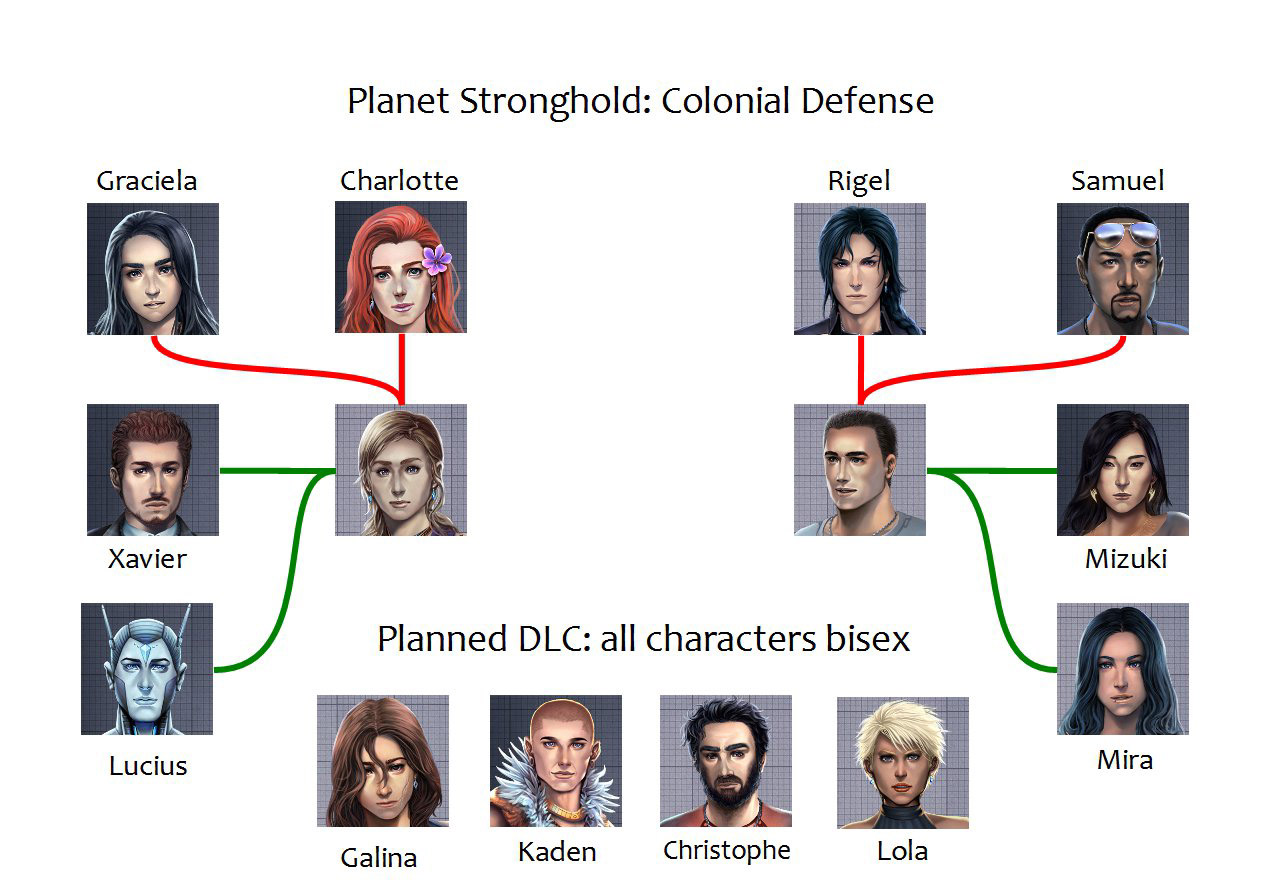 The blog shows the bottom one while the forum post shows the top one, so I'm just a li'l confused.

Granted, I'm mostly pining after Christophe (when I noticed he had a crop top and a navel piercing, I almost died right then and there) so I'll be happy on that front regardless, but I'm mostly just asking 'cause of Kaden. /snickers/
Top

Yes the top one is the right one. In practice all the DLC characters/romances are bisex

OK so I just finished coding Heirs And Graces. Beta should start either this weekend, or maybe next week. Anyway, soon for sure.
I finished this much before I thought, so I will work on the PSCD DLC next. I'll make some experiments with a free play mode and such

I've added the DLC romances, and I'l start doing the "free play" thing now.
I haven't decided yet how it will work, but was thinking maybe something like a series of battles of progressive difficulty, or something like that. Mostly an excuse to include the extra cards. Since they're powerful, I could do more powerful battles to use them, but of course I don't want to touch the main plot ones at this point.
Anyway, I forgot I had to code also the various jealousy scenes...

there are just too many haha!
Top

jack1974 wrote:Anyway, I forgot I had to code also the various jealousy scenes...

there are just too many haha!

Time for a little fanservice then Jack! HAREM ENDING! I had to you know....
Top

Haha would have been easier for sure