The tale of the siblings Althea and Shea https://www.winterwolves.com/seasonsofthewolf.htm
Post Reply
135 posts

The uploads are now on the main site at this page: http://winterwolves.com/SOTWbadblood.htm
to play the DLC, load any ending in the main game BEFORE the credits, and you should see an option to buy/play it

What's New in 1.0.8.7
- fixed a crash while switching to Attributes tab (was due to a speed optimization but I forgot a parameter!)
- fixed a missing scene with Chalassa based if Jul is alive in Blood Realm

What's New in 1.0.8.6
- Chalassa's ending CG have several variations depending on your action in the Blood Realm's "dramatic scene" (you know what I mean). Fixed a bug that was playing two possible variant one after the other (a minor issue but still needed to be fixed)

What's New in 1.0.8.5
- tweaked the final battles in defense of Ninim, in particular the one with single party member+Ninim Volunteers. Volunteers now have higher magic resistance, and two guards join instead of 4 volunteers+1 guard. Hopefully now is not too hard in Nightmare mode!

the quit to menu bug was moved to the Blood Realm (after each battle). this could happen if you finished the palisade very early (I didn't take into account that possibility). Now is fixed

What's New in 1.0.8.3
- fixed bug that was showing Chalassa image while MC saying "Chalassa is not with us anymore..."

- Krimm's Fury skill was using default male voice (this was an ancient bug present since 1.0!)
- Althea/Jariel ending CG now plays correctly in two mutually exclusive cases (before was playing only if you picked a certrain choice in the Blood Realm scene)
- fixed a very tricky bug. During a "certain scene" in Althea's path, I calculated badly the possibilities. She could be with Jariel, with Chalassa, or alone. But I forgot to take into account that Shea might have been the main hero: in this case, the variable "lover" which I used to keep track of the love interest could have been "Krimm" or "Riley". This problem was causing the game to skip a part...about Rowinda (you know what I'm talking about!)

What's New in 1.0.8.2
- Daronas and the guard heals fully after each wave during the defending Ninim scene
- fixed again the crash on reload (was using a config variable outside the init part

What's New in 1.0.8.1
- fixed the "quit to main menu" bug when hunting gnolls after palisade is complete. You need to resume from a save BEFORE the map is shown (it's enough to rollback to the previous scene with Daronas). Note that the Council threat scene always play one day before the deadline, so if you finished the palisade 3 days before the deadline you'll be able to search only 2 times, 2 days left and you'll be able to search 1 time and so on.
- CounterAttack skill now increases Riposte by 75% and NOT 7500%!!

- the Spiders fighting alongside the Dark Elf alchemist are stronger and give more XP
- fixed last scene with Dark Alchemist, so that the potion throw animation actually plays!
- rollback should now work again in any situation
- while replaying the DLC after beating it with the "startup conditions menu", the character clothes will reflect your class and not default to the predefined classes

What's New in 1.0.8
- added the missing CG images at end of the DLC story!
- added XP bonus if you pick the "non-combat" options: burning minigame, and talk the dark elf into leaving. They give 300XP which is just slightly less what you'll make if you fight

What's New in 1.0.7.9
- changed the spirit world backgrounds colors to be different from the "standard ones", to give more the illusion of another dimension!
- capitalized E of Elder Maryllia
- party now should fully rest between segments (both Shea & Althea)
- removed the mention about FIVE trees since both in battle and burning minigame there can be a different number
- added new artwork for the buy DLC screen (the official art for the DLC)

What's New in 1.0.7.7
- fixed a wrong background in the dark elf alchemist scene
- fixed all typos thanks to Miakoda. If Artas speaks badly, it's his character that is supposed to speak that way

What's New in 1.0.7.6
- made Artas and Akkarim wolf sprites bigger (they're supposed to be big wolves!)
- in the party screen the "old" wolf image was still showing for Artas, updated it with the right one
- killing the giant bees now rewards you with Flovervale Honey item
- changed Artas "Pounce" skill icon
- added 8 new achievements for the DLC!

Video preview of DLC contents (warning, contains spoilers of the main game! is safe to watch if you already played it):


Please note: all the ending CGs are still missing! It means that when you reach the point where the DLC should show, you'll see a very nice gray screen like this one: 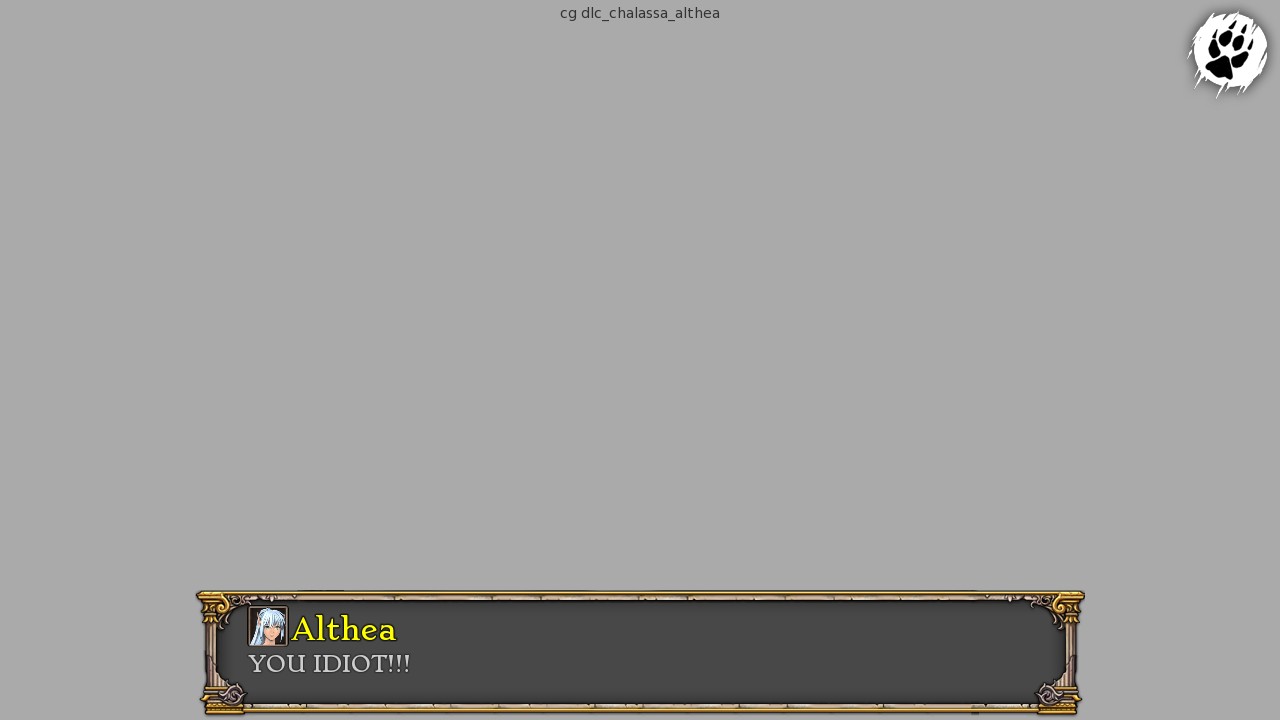 (lol I took the screenshot in a funny point! sorry about that)

When you reach those points if you can save the game since I could ask you to send me the saves when I have the final CG to add. There are 4 CGs for each love interest, plus 1 special CG with Althea... "riding something" (I can't say more than that because of spoilers!).

The game uses the latest Ren'Py libs, so if you notice anything strange, even in the old screens (combat, inventory, etc) let me know.
The final CG should arrive mid-April, hopefully sooner. And before complaining about a "certain bad thing that happens" in the story, make sure to play the game until after the credits...

As always please use the spoiler tag if you talk about stuff happening in DLC since there are people who might haven't played it yet.

The DLC part is more focused on the story, as already told before, with several exclusive romance texts depending who is your love interest. There are still fights but definitely not as many as during the main game. I am unsure if in Nightmare difficulty the metagame can be "won" (in practice if you build the palisade in time). Even if you don't build the palisade you don't get a game over but the final part should be harder.

Once you beat the DLC, you can restart from any main game ending and you'll see a menu from which you can pick the DLC starting conditions (so you don't need to replay the game from beginning to see the various different scenes of the DLC).

That's it! Is late here so I won't do any more updates today but tomorrow will check the various bugs people surely found

I guess we have to order before we can test it? The store page promised a demo.

Some typos on the purchase page:
Meanwhile, Althea will travel into the realm of the animal spirits with Jariel, Rowinda, and Chalassa (if she is still alive). If Chalassa perished, a new companion will take her place, the loyal shapeshifter Artas.
Top

Thanks for the typos.
Yes unfortunately like with Loren, for the DLC I can't really show a "demo".
Top

I spotted a few things myself already, and Taleweaver suggested to make the wolves in the game bigger (since aren't supposed to be normal ones): 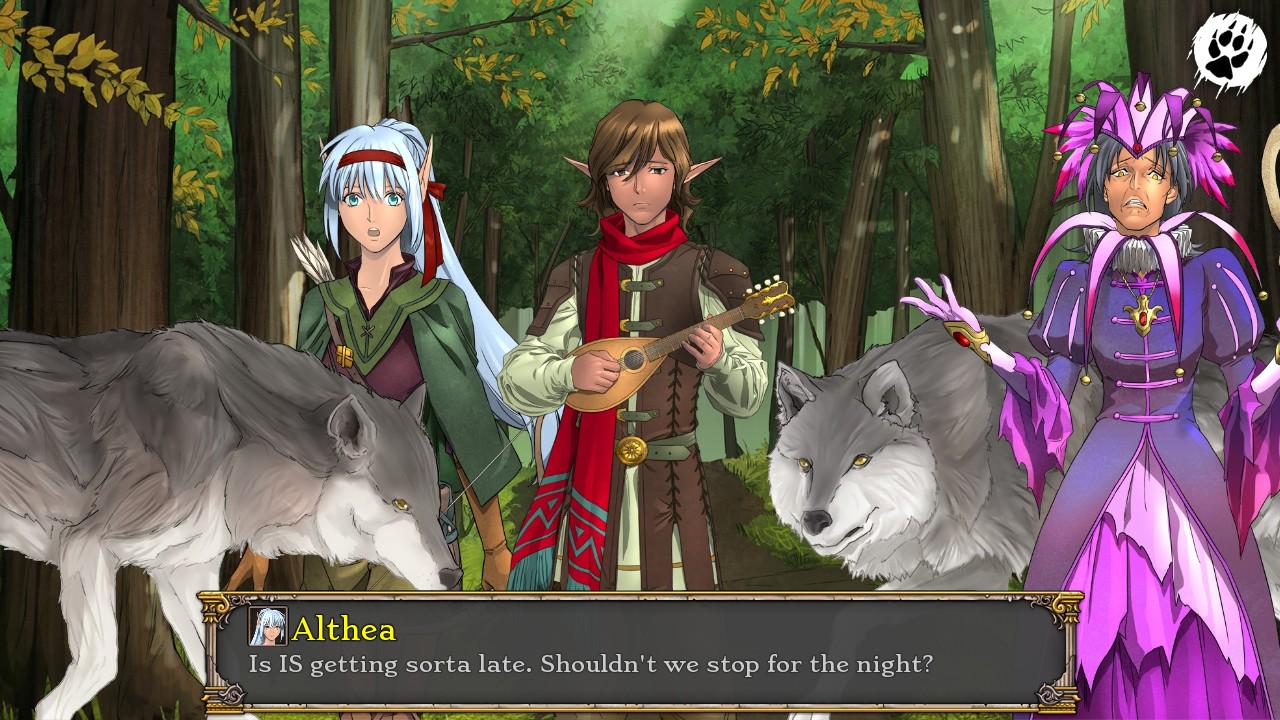 as for the demo I'll try to record some videos in particular of the "rebuild Ninim" metagame since is the main thing of the DLC, excluding the plot obviously... but can't show really much of the plot because of spoilers

Updated the game to 1.0.7.6 with several new stuff

Later today will make the video showing the gameplay.
Top

Ugh, I just saw another typo in above screenshot:

No, Althea's not talking about terror organizations here. She means to say "It IS getting sorta late..."
Top

Haha OK will fix on next update!
Top

Is it possible that you could have one of your other writers (a native speaker of English perhaps?) thoroughly proofread the script? I'm seeing a number of (what I'd judge to be) obvious grammatical mistakes in the first 10-15 minutes alone.

Looking forward to going through the DLC though! (As time permits...)
Top

Yes probably is a good idea before the final DLC release! Will ask and see who could help