The tale of the siblings Althea and Shea https://www.winterwolves.com/seasonsofthewolf.htm
Post Reply
9 posts • Page 1 of 1

Before I continue down this road I'd like to know if this might get nerfed. It's an extremely potent duo for turtling and generally I can take down any team without healers, though not the Kiduu 'cause they cheat by spamming Sweeping Strike even with 0 mana. Anyway here's how it works.

Phantom Form on Ranger
Ward on Ranger
Defend or Healing Prayer on Ranger while Riley keeps up Energize and Phantom Form
Guard Riley if necessary
Use Invincible if necessary
If incoming damage is too high despite this, throw Slumbers around to slow it down

This continues until the enemy is out of mana. Note that all attacks will go on the ranger, who has a kilometric fuckton of defense. It's too little to say I'm blocking more attacks than not. I'm perhaps even blocking more SPELLS than not. The high armor of a plate wearer with a shield, amplified by Phantom Form and Defend. And if a spell goes through, there's still Ward up, and my ranger has no shabby amount of magic either.

Wrapping it up after that can take some time sure, but once they're out of mana I have won. Bramble Coat and Magic Sparks do the bulk of the actual killing.

Naturally the levels fly by when I'm duoing. So now my question is, should this be nerfed somehow? 'cause if it is getting nerfed, then I'm gonna stop doing it. One idea I had for messing this up (without messing up conventional gameplay) would be that if you are able to use 5 or more party members for a fight, but instead use a setup with only one guy in the front row (if you have two but one is dead that still counts as two), the enemies gain some special ability that will fuck it over. It can be a godmode finger of death or just something like Bleeding Strike to irreversibly reduce the tank's max health so the turtling won't work. Of course this doesn't stop you from doing the duo thing should everyone else die in a proper teamfight, but at least you will have to split the experience.

The alternative to nerfing it is saying, well if someone wants to spread their party levels like this, they've shot themselves in the foot when they get stuck. After all it's not something you're gonna try if you're not already a SotW-nerd.

P.S. If you remove attack/defense calculations for landing spells I will be happy. I think it's another of those elements you've added that don't make the game better.
P.P.S. If you want to try this at home, get some SPR first.

Completely unedited video, I only compressed it before uploading:

If at first try it doesn't explode, it ain't Jack who wrote the code.
Top

Not sure how many people would actually level like this, even if they could.

Yeah not sure I will either. Might fill the back row at least. It all sprang from my grievances about the inability for a tank to protect the front row...
If at first try it doesn't explode, it ain't Jack who wrote the code.
Top

Haha fun! That strategy shouldn't work on act3 though, since enemies can regain mana with potions or spells? otherwise I need to change a bit the AI in that case (for act 1 and 2 I don't want to change anything anymore!).
Top

Depends on 1) is that mana gonna be used to heal and 2) does my mana run out while I bunker down. If the answer to both is no, I will still win. Anyway I doubled my roster up! Kenyabelieveit: 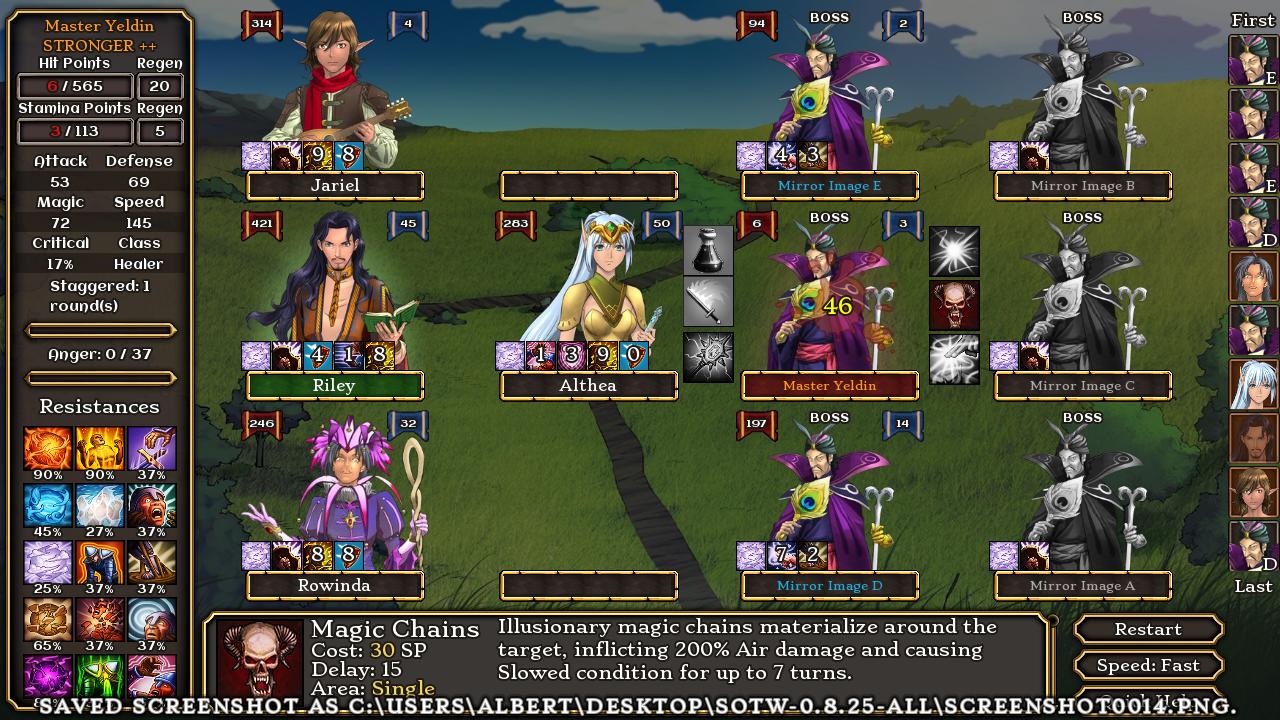 Took very long. Gonna redo my shopping, the facepalm was strong in this one.
If at first try it doesn't explode, it ain't Jack who wrote the code.
Top

A very shiny cookie to whoever explains why Yeldin has 25% air resistance there but 75% when I'm doing him now. Tired can account for 25% but not 50.
If at first try it doesn't explode, it ain't Jack who wrote the code.
Top

The enemies stats CAN be a bit randomized on every playthrough, depending how I define them. For him, I have as "traits":

from a base of 30 Air magic. So if you add random+the level (each level up increases stats, not randomly though) it could happen.
I can disable the randomness, or make it work only on the base stats and not the resistances, but I thought could be more interesting to have variety ?
Top

It's not make or break unless I insist on 4 manning him...

Though maybe there should be something in place to prevent him from having 90% resist everything. That's not variety, that's don't bother nuking :D
If at first try it doesn't explode, it ain't Jack who wrote the code.
Top

No that's NIGHTMARE MODE ON!!!