The tale of the siblings Althea and Shea https://www.winterwolves.com/seasonsofthewolf.htm
Post Reply
118 posts

Ah yes, need to fix that, got confused with dual wield

Though not sure how I should fix that, I mean which value...
Top

Okay I made some tests and changed the uninspiring "Critical Hit" trait into... 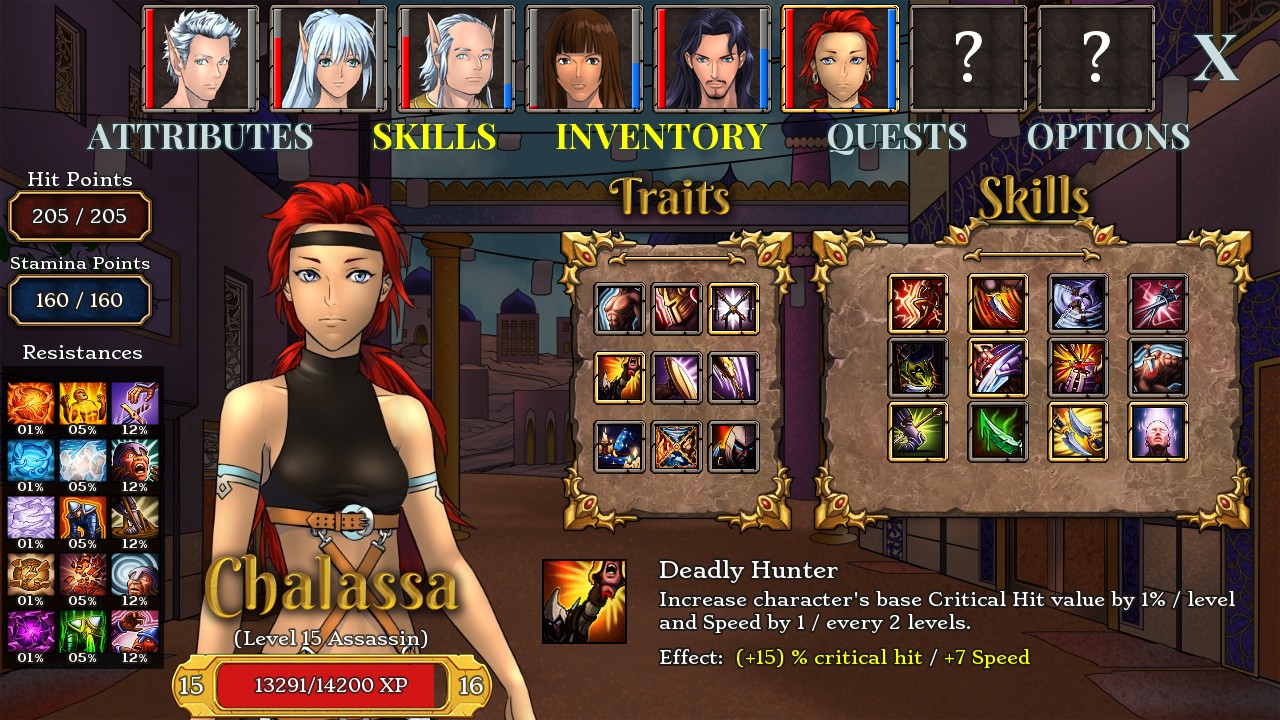 wooot. the +1% critical / level is probably the less exciting thing about it, but +1 speed every 2 levels means you'll end up with +12-15 Speed (depending on the famous level cap I decide to use) which could be useful even if applied to Warriors. I thought to put +1 speed/level but could have been too overpowered so for now I settled with that value. More testing (especially towards end of game) will be required

I'm having a difficult time understanding why the +15% HP bonus on Toughness was shot down as overpowered, yet you keep making traits with scaling percentage bonuses left and right

Let's say that 5% fire resistance translates straight to 5% fire damage reduction, and there's no resistance cap. Now say there's a trait that increases fire resistance by 5%/level. At level 2, that's 10%, hardly very exciting. You'd be a fool to think it would make a noticeable difference against a hypothetical fire caster encounter at level 2. At level 20, it's immunity. At level 25, it's immunity even in a "fire environment".

All these flat amount per level traits don't work like that. +2 magic, while unlikely to be better than the diversity of another spell, is not an unexciting bonus at level 2 (it would probably help more against that fire spell than the resistance would, too). Meanwhile, +25 magic at level 25 doesn't translate to "your spells will oneshot everything" (well hopefully

). On average, that trait would translate to +10-20% magic for the mages I checked on various saves. From that perspective, you could make it +15% magic, but that would scale with nerdiness - the more restock roulette you play, the better it is - and I thought this was the reason we went for the flat amount per level idea. For the record, none of those mages were particularly pimped out.

So we're not getting +15% magic on the trait, we're getting 1/level. What you definitely wouldn't do then is make a +1%/level magic trait... still you did it with dual wield, and after I thought I'd explained why that's a bad idea, you're doing it again with crit. The crit trait is gonna scale like that hypothetical fire resistance trait; first it sucks and you wouldn't take it even with a free trait point, then at some level it's a balanced trait, and then it's overpowered.

I get you want to do something different from the birthday gift, but consider:
- It's far more likely than not (assuming equal probability for a player to take each gift) that that gift won't even be taken
- Even if it is, your twin won't have it, and the other 6 characters don't even have birthdays, so it's a rather small case of "diversity needed"
- Crit traits/gifts can make uninitiated mage players waste their points, so I'd rather they were gone altogether

I'm not as worried about this as I was about dual wield though, because I still find crits unexciting

If at first try it doesn't explode, it ain't Jack who wrote the code.
Top

As a sidenote: I was going for the crit trait earlier on as I had pretty high crit chance on my Hunter from equipment (I was investing on Speed, STR and SKill on it, anyway with no Ranger in the party at the time) and I noticed that the heavy bombs did more than 75HP dmg upon crit.

(I don't have a screenshot, it was between 90 and 100, anyway) Haven't been playing with it since the traits were separated from the attributes (and I now have ranger/hunter).
Top

The Heavy Bombs did more than 75 damage! That's... wrong, I think! I mean of course it is, obviously I know they're supposed to do...

Anyway I looked them up

if they can crit, it should be for 93 damage. I'm not sure what you are trying to report. Have you seen something else crit but not cause more damage for it?
If at first try it doesn't explode, it ain't Jack who wrote the code.
Top

Not sure if I'm really reporting anything, just getting confused on the dmg done on crits.

Also, if an equipment that's supposed to give static 75HP/50HP/25HP dmg can crit, then could, eg Rowinda's spells for static amounts also crit (eg syphon life)?

If crit chances can be raised high enough with traits, speed and equipment, and 93HP from heavy bombs is legit, I guess I'll start investing.

Bombs*) can be evaded, too, by the enemies. I guess that's intentional with the dodging abilities?

A crit is 25% bonus damage, and you can forget about rounding decimals up in this game ^^

Even spells can be dodged so yeah I'm sure it's intended.
If at first try it doesn't explode, it ain't Jack who wrote the code.
Top

Thanks for the clarification

I gotta start paying a bit more attention to some of the crit dmg numbers I see.
Top

what about "Fast Recovery", heals HP & SP by 20% after a battle? Or "Armourer", increases weapon damage by 2?
Top
Post Reply
118 posts