The tale of the siblings Althea and Shea https://www.winterwolves.com/seasonsofthewolf.htm
Locked
1027 posts

Not long ago I received an email from a certain indie game developer saying...

So, anyway. A round of champagne it is. Krimm's "paying".
If at first try it doesn't explode, it ain't Jack who wrote the code.
Top

Yes, Renpy 6.18 was released as "stable", so thought that all was good. Then, new bugs popped out and were fixed, so I thought was safe to update to get the latest version, and instead...
For reference, you can still load saves of Loren 1.2 (made in 2012!!!) and they'll run just fine in this latest version. I am not sure exactly what's the problem, but when you do a insane game like SOTW is hard to look into hundred of thousands of lines of code! I think is safe to assume that it can break on any update now

Hopefully, at one point renpy will reach a stable 6.18 release so I can use that and finally release this game, before I get into a madhouse

At least managed to finish Vaelis sidestory this morning. You can use Morran in combat!!! 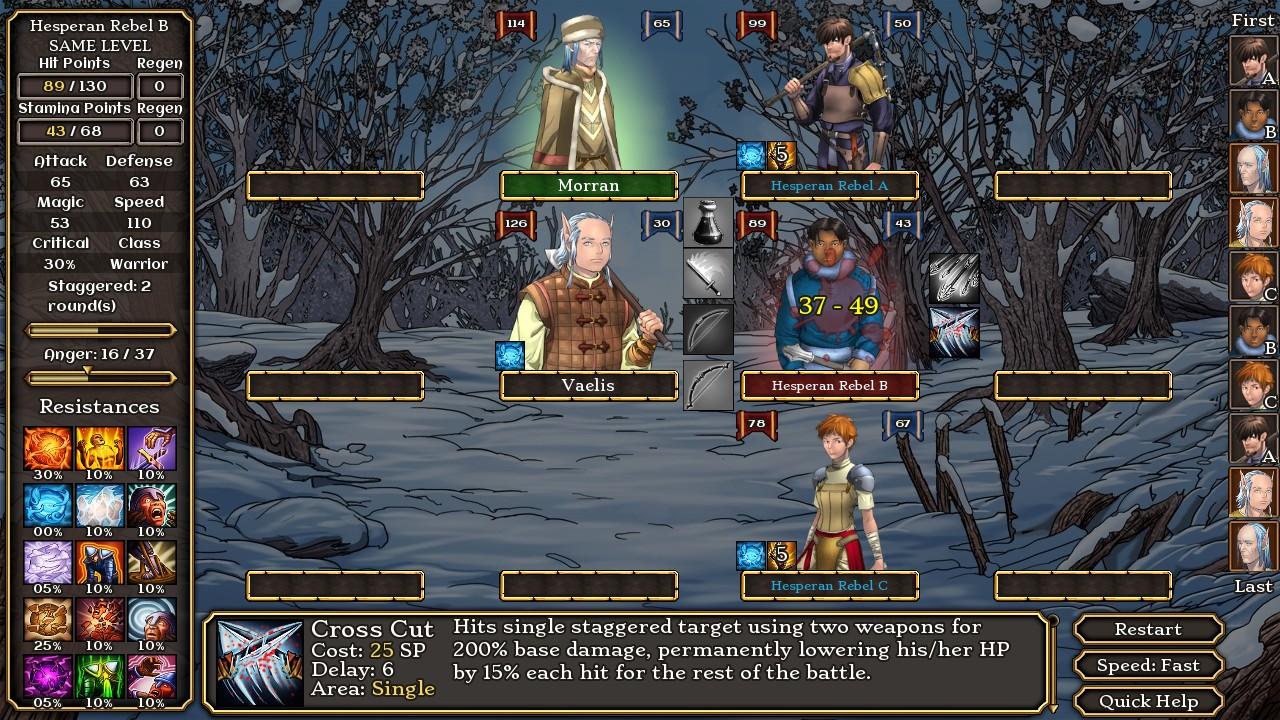 ...it would be fun if someone hacked the game to add a special skill to him called "Morran's Pants". Instantly kills any enemies on battlefield

Hope there's no use for regen dance in the flashback if you're gonna make it that fast.
If at first try it doesn't explode, it ain't Jack who wrote the code.
Top

Spoke with Ren'Py coder, he is working on fixing the issues and said that on the next update would look at savegame compatibility, since is clearly a new thing (before it was a strong point of Ren'Py!). Not sure if he'll make in time befoer I do the next update, we'll see. Today I plan to finish coding Rowinda's flashback which has a fun minigame, then I need to wait for the tileset and put everything together. I think at this point ACT3 should be ready early October. The good thing is that ACT4 won't be delayed much longer, if I make it in time might release both at once

Someone's prally already found this, but today on the latest version of the game, when selecting attacks, if i slid over from one attack box to the other without moving off of the squares, the damage predictor blood splatter thing would appear on a different slot (always the back top one). I took a screenshot if that would help

This should have been fixed!
Anyway, good news: Ren'Py coder found a way to keep compatibility with saves of this version, I just tried loading the ones that fabula sent me, and they all work!

There are still some minor issues (when you hover on buttons during combat the fading-in animation repeats) but the most important thing (old saves compatibility) was done!
Top

Haven't decided yet if I'll start from scratch immediately once Act 3 is out, anyway... Then again, I'm pretty eager to see how the story continues already so I'll probably leave that scratching for a second run. Oh well. I guess I'll go tell mah heroes that they can stop drinking all that champagne in the bathhouse...for now.