The tale of the siblings Althea and Shea https://www.winterwolves.com/seasonsofthewolf.htm
Post Reply
8 posts • Page 1 of 1

I like the outfits in this game. It's nice to see them in different clothes suited to the weather. ^__^ Just started playing.

I was hoping there'd be an option like in Loren to um... not wear 'unnecessary' clothing.

But, it is a very nice touch to change with the environ. I've never thought of bikini armor being very practical in snow.
Top

I guess I'll post here as well to support the outfits in this game.

I have been very pleasantly surprised by them. Not only are they beautifully drawn, but also reasonably functional. The climate-appropriateness is a huge plus, imo. The fact that the battle armours are at least somewhat battle-appropriate is another huge plus. Althea's hunter armour in all its low-key-ness is one of the best female archer armours I've seen in RPGs. Krimm's battling armour along with Althea's ranger armours are still a far cry from proper mauling gear à la Brienne of Tarth (HBO version), but they are a huge improvement from Loren. And I get the allure of body-fitted armours that highlight the best features of female and male anatomy as a selling point...... However, one of the reasons why it took me weeks of debating whether to buy Loren or not after playing the demo was that I was afraid of breaking my nose due to too much facepalming upon looking at them standing in snow in their underwear. At least Sauzer had his PJs on. 1) In my opinion battling armour needs to be battling armour, and warm clothes need to be warm no matter how much the fantasy card is played. 2)

Having said that, I have nothing against sexiness & nudity as such. In fact, I endorse it when it's appropriate to the plot. *removes the bikinis from the bathhouse scenes as bikinis are a modern invention, anyway*

1)Obviously, in the end I bought Loren with Castle of N'Mar extension because the story intrigued me + I liked the gameplay, and I'm very glad that I did.

2)I'm not denying the fact that experience in playing with female characters in online MMORPGs and PvPs with limited clothing choices and all the cyber-sexual harassment --- regardless of the said choices-- I have encountered there "might" have oversensitized me a bit against having to fight goblins etc while wearing nothing but or less than underwear.
Top

Yeah as I said many times - the problem isn't the sexyness (I'M ALL FOR IT!! haha) but in an appropriate way. Fighting in underpants looks ridiculous and detract fun and "realism" from the story itself. "An EPIC battle, I was facing the Demon Lord with my bikini armor!" rofl
But obviously, if you talk in a bathhouse with your companions and they're interested in you, this is cool to see... 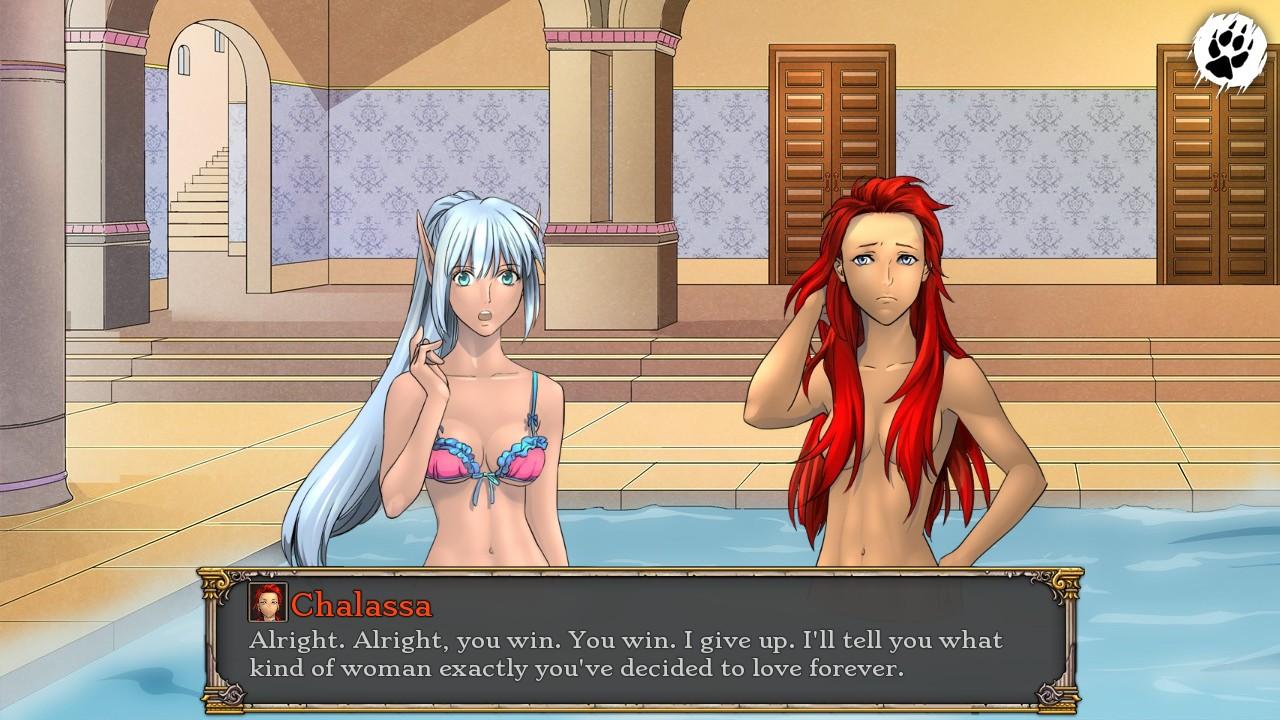 Chalassa's hair is very long. She could use a haircut. I particular, in front

Silly Althea, why are you wearing your bikini while bathing

I'm fully in support of more instances of women wearing approiate attire in all settings, so full covering armour for our warrior ladies while in battle, warm fur cloaks or somewhat while trekking through the cold snowy lands, and of course also sexyness or nudity when it's relevant and fitting etc.
Going to war in a bikini armour is ridiculous, quite like how some games have fully clothed dryhumping as so called "romance scenes".
Top

Sylrissa wrote: Going to war in a bikini armour is ridiculous, quite like how some games have fully clothed dryhumping as so called "romance scenes".

The best are mass effect romances, can't remember exactly which one, but there was a scene in which one character after making sex (dressed) takes a shower DRESSED, I was playing with my wife around and when she saw the whole scene, we both laughed at it

I remember that one, it was the Femshep with Samantha one!.

Dragon age had some really silly ones too, grinding on each other and making O faces while still clothed, I just couldn't take them seriously and found myself in fits of laughter more often then not, I love you Bioware but you make some really cringe worthy 'sex' scenes.
Top

If at first try it doesn't explode, it ain't Jack who wrote the code.
Top
Post Reply
8 posts • Page 1 of 1