I decided to divide the stats and distribute them between the various item categories. For example, no weapon will give you a Defense bonus anymore. Armors will provide defense against elemental attacks but not body/mind, etc.
Many changes from Loren, and the biggest one as you can see is the resistances that have a 0 to 99 scale.
Also changed the attributes screen so it would display the base value derived from attributes, and the actual value after the items effects.
In summary, while I haven't had time to touch the skills yet, it was a very productive week

So, ahem, about the skills: 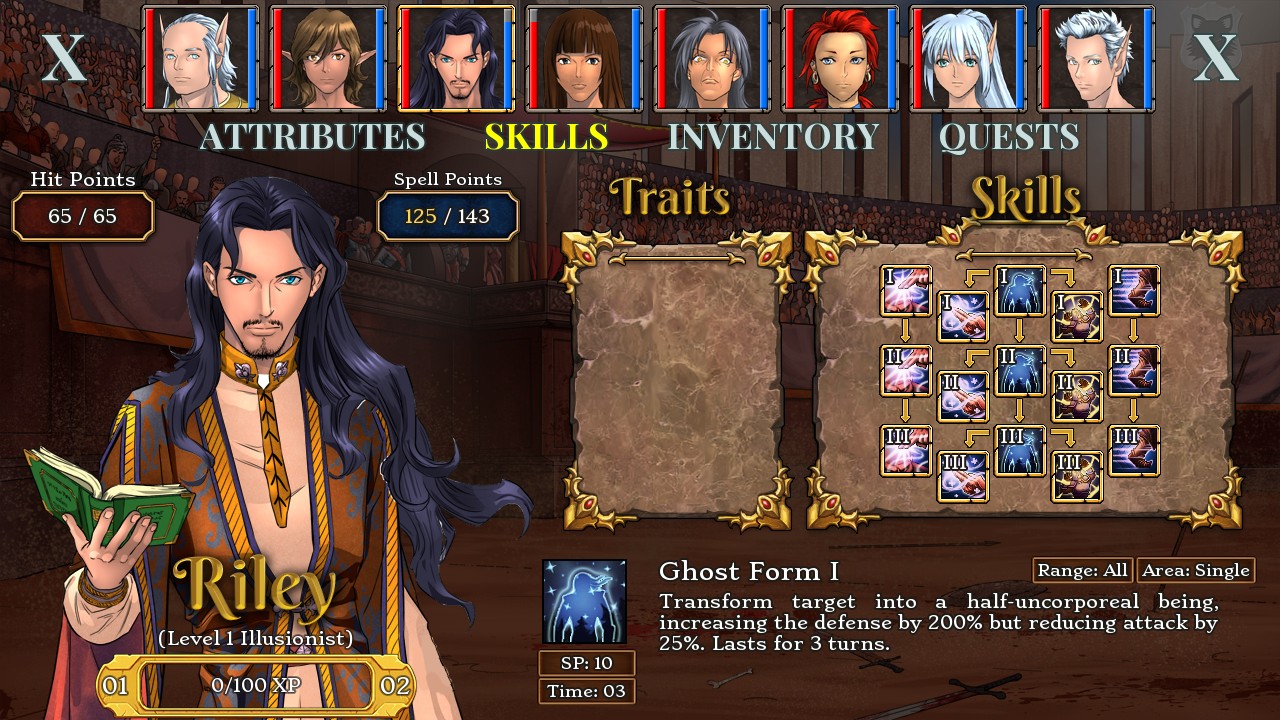 I realized that adding new skills or making leveling skills would involve a good rewrite of the framework... and I think that it would be easier for me to add another thing, like a basic crafting or other gameplay element, than mess with it (also enemies AI use some of those skills, so could add up problems). Besides, this was supposed to be a small game

it isn't anymore, but if it's getting bigger, at least I'd like to keep the coding simple so it can be hopefully out for Christmas.
I am going to keep the skills I already posted before (with some tweaks probably) and I had the idea of adding another element, "traits". Traits are permanent passive bonuses that you can unlock as level up (the two twins get one during the creation phase). I am thinking to tie the traits to attribute values, for example (values are just indicative):
TOUGH - base HP increased by 15%, requires: Constitution 25, Strength 25
GENIUS - base SP increased by 15%, requires: Will 25, Arcane 25
and so on. They would unlock automatically once the values needed are required. There would be 3 different sets for each base class (Warrior, Thief & Mage) and probably 5 each.
So at least there's some more variety when leveling up

I'm gonna regret having skimmed this thread as the attribute discussion actually does interest me but I mostly checked to see if a concern of mine about skills had been raised.

A problem for me with Loren's skill system is that skills tend to get exponentially better with levels. This means it's usually better to max the skills you have than to learn new ones.

Yes, SP cost and delay increase, but at least in the case of delay you are getting more effect per time out of the highest rank (assuming you care for the confusion part at least). Plus, mana can become a no-concern in the lategame. And this goes for many skills.

A better ability is Loren's Rally. If duration was constant between the ranks, I would call it perfectly designed. But anyway, when I take rank one, I get the ability to reduce ailment durations. Even if Loren alone would be the only one to care for her attack value, I'd still take one rank just to be able to get my party members out of paralyze faster. This is the way I think things should be: Rank one of a skill should be the most exciting part.

Let's look at Crushing Blow. I am actually unsure if duration increases with rank (tooltip doesn't say), but anyway. I would prefer it were designed like this. Rank one has a significant (guaranteed? why not) chance of weakening enemies for duration X. It doesn't do crazy damage. If you take more ranks in it, only the damage improves. That way, you can take that first rank to add one tool to your toolbox for dealing with a hard hitting lineup, but if you decide that a front row cleave suits your party's style, then you can max it. If you find yourself using it often because it suits you to keep the front row weakened, you might also max it to bring some more pain when you do that.

I think the game would be more interesting if I was encouraged to take at least one point in most skills rather than just max max max. With Loren for example it's 0 points in her skills or 3.
If at first try it doesn't explode, it ain't Jack who wrote the code.
Top

With mages surely work, only because each skill/spell is associated to an element.
With other classes it gets a bit more tricky. I think the best solution would be to have all different skills (maybe less each char, but all different) and you could just increase the power adding skillpoints to each one, like if was an attribute. Anyway for this game I'm using this system but the skills should be all somewhat different (hopefully!) so each worth learning.
Top

I don't think it gets tricky, you've done a good job at it in Loren. The concepts are right, the numbers aren't. Let's take Head Shot again. Level one is just a 30% chance to confuse for a short duration and almost normal damage. Why would I shoot that? Maybe if it's all I had mana for. Level three however has a better chance, great duration and nicer damage. I would use level three Head Shot to mess up an enemy wizard, but I wouldn't count on doing it with level one. So you see, either I go for level three or I forget about it. If level one had a high chance of confusing for a decent duration and the other ranks just added damage, I would feel tempted to take rank one, and going further would depend on my playstyle. Is it Rei's job to mess up casters or just something he helps with if the need arises? If it's his job, go for rank three. More damage = more likely to stagger.

There are more niches than just different elemental damage. There's a variety of debuffs, a variety of buffs, there's AoE, row damage, line (Strike Through) damage, you could have lifesteal, manaburn... but you've done a good job finding niches with the Loren skills, it's just the first level of skills doesn't tend to fill any niche, just gives you something to use mana on. Low damage for a low chance to cause a debuff for a short duration.
If at first try it doesn't explode, it ain't Jack who wrote the code.
Top

Maybe a solution could be that the low tier has a higher recharge (means the wait is longer, making the attack slower). I guess I could do a beta to test this idea

I'm not following here. Do you want to give the first rank or the last rank the long delay? 'cause I'm trying to make all first ranks good here, and that doesn't help :P and the last ranks already have a long delay. If you want me to consider which rank to use when I have all three then my system would accomplish that too, because high ranks have a heavy mana cost. So I could decide: Is it worth paying the extra mana for some more damage in this situation, or am I content with confusing my target? I already employ that line of thinking with Leg Break, my beloved 100% chance on all ranks skill.

Also some skills can't even afford a longer delay. Normal attack = 6 delay. Knockdown 3 = 10 delay, and that's 200% damage and the 80% confuse. If it had a 12 delay I would be paying the mana just for the confuse and momentary burst, but over the delay of 12 I'd be doing the same damage.
If at first try it doesn't explode, it ain't Jack who wrote the code.
Top

Uhm OK you're right, better if I stop posting while I am doing a thousand other things...

Are you still planning to make Heal restore 5/10/15/20/25% health BTW? 'cause that's surely a step down from the design of Life in Loren. The guarantee to heal at least 50/100/150 points was great so that it always had some oomph for low health members, and the % kept all ranks relevant. Lategame I always find myself considering which rank to use in each situation (as I do with Leg Break) so that's great. But when would I want to use a measly 5% heal? Probably never lol. If you want to try something new instead of reusing the Life model (but I liiiked it) you could always go for something nerdy like adding spell power scaling with a coefficient for the low ranks that decreases as the healer gains levels.
If at first try it doesn't explode, it ain't Jack who wrote the code.
Top

Ah no, I use fixed amount of heal, currently is 30/45/60 but probably will change that during testing.
Basically all the stuff you see in forums here is outdated, I realized I had to tweak it 15000 times anyway while coding/testing so is a bit pointless to keep updating it in forums