by Franka
Endgame stats. Your reminder that some stats are more important than others. 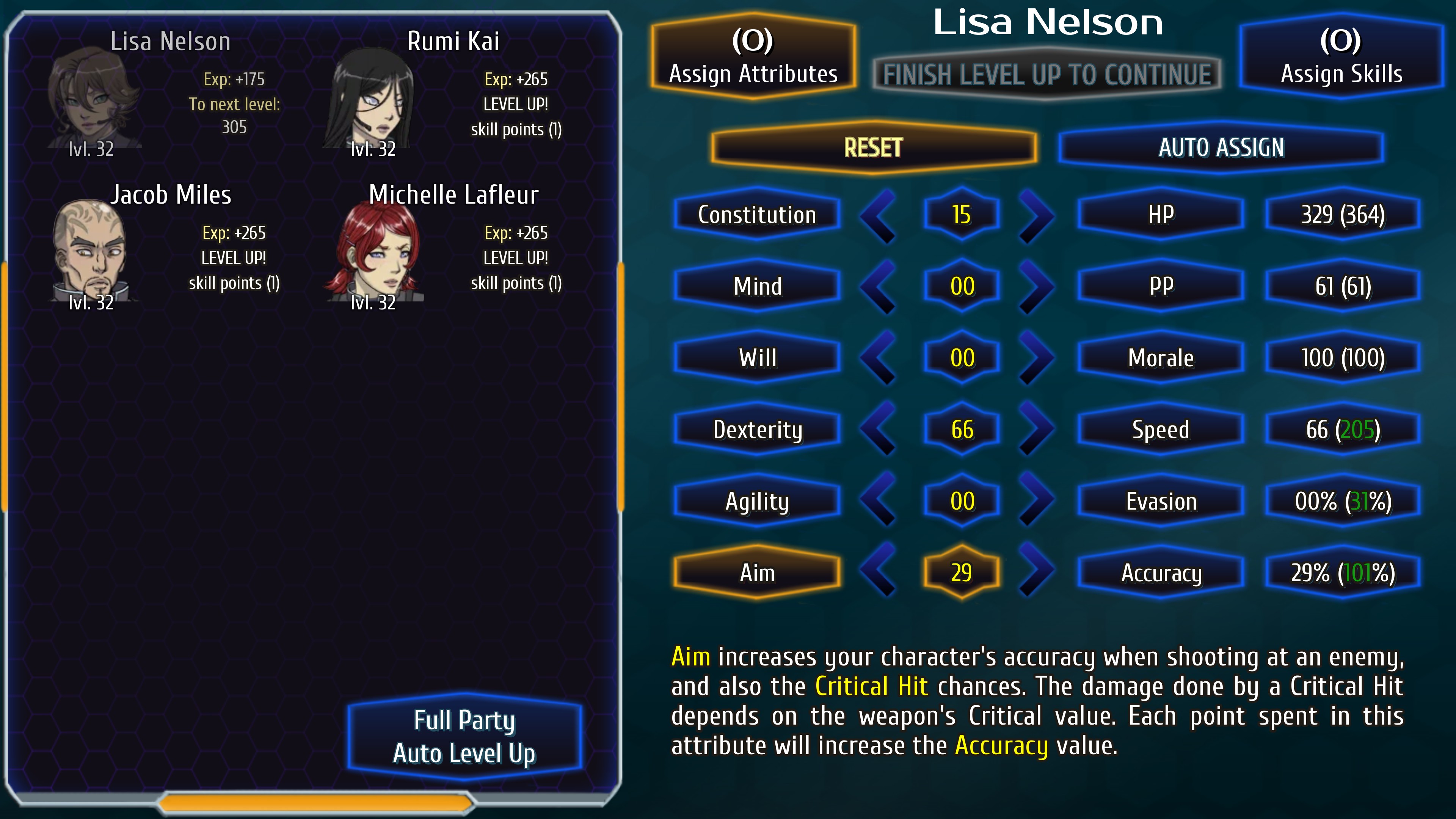 by Franka
Kill stats. So you say Tom is unpopular? Don't know what you mean... 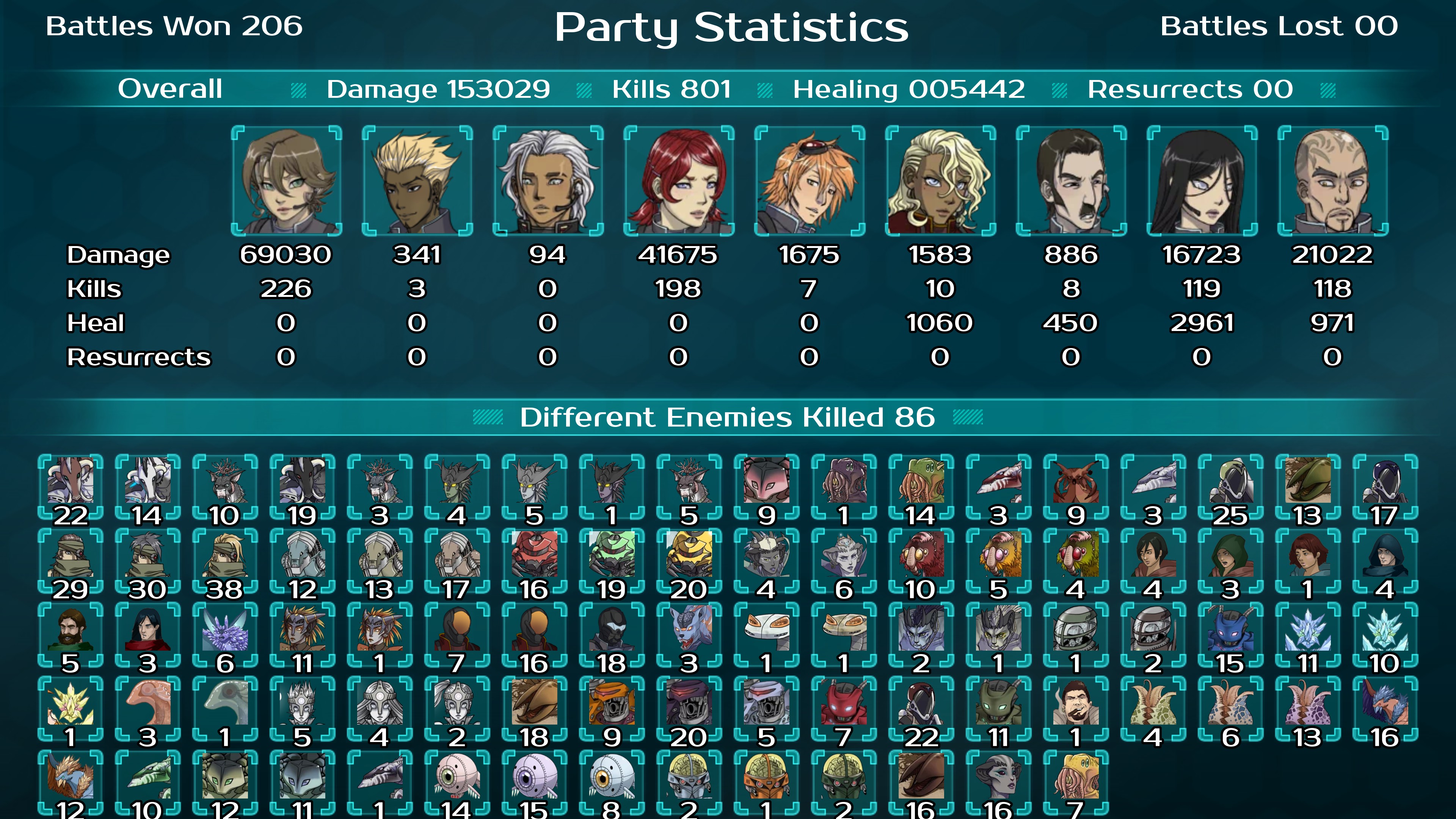 by jack1974
Haha you know if you played the Milo route, I put an inner joke about a "speed cheat" in the RPG he is playing, which was an obvious "meta" joke about my RPGs in general (the "speed trick" was present since Loren times!

I saw that, I think it's a regular event.

by Jaeger
On my last playthrough, none of my characters had stats that reached beyond 20, which was doable on normal difficulty. My party always struggled to get their turns though (especially those with slower weapons), so I can see why pumping dexterity is a good option. The other problem is only Constitution and Mind have diminishing returns after 15. Will was always a questionable stat to me.

by jack1974
Cool thanks for sharing. It's fun thinking that this will likely be my last RPG using this system. But on the other hand is pretty clear that doesn't encounter the majority of my fans/or most of the fans of RPG AND VNs

So far on Steam the only two negative reviews of PS2 are about gameplay and honestly sucks, I was aiming at 100% positive reviews

Most don't seem to like healing/resurrecting enemies. I remember in Cursed Lands I got some comments from pro-RPG players saying that the game was too easy because since enemies don't heal, you could just eventually outrun them (since your party can)

In the end I think PS2 is superior to Cursed Lands on almost every aspect but of course all that matters (sadly) is the sales and amount of people who like your game, and it's pretty clear that people care mostly about the story and even those who like some gameplay, they want something SUPER EASY both to learn and to win...!

by Jaeger
Besides the fact you can't please everybody, the positive/negative rating system on Steam lacks nuance. The two negative reviews were from people too lazy to provide context for their grievances.

Healers are troublesome, but there are ways to deal with them. If the party is built or equipped for it, you can focus fire and take out the healer early on. Drain Power will reduce the number times they can use their healing ability. Into the Fray can used if a healer is protected by a tank. Defense deteriorates, eventually the damage will outpace the healing. PS2 on the default difficulty is not that hard in the grand scheme of things, it seems some players just don't want to adapt.

by jack1974
Yes I agree. What I am saying is that out of 100 potential buyers, MOST of them just want a simple/casual experience and not a detailed/complex RPG gameplay. So every time I tried to push in that direction (like happened with SOTW) the results were worse than when I just pleased the casual crowd.
So doesn't matter what I personally think, but I need to please the biggest group, or earn less than minimum wage

Sadly I've come to realize in recent years that being a full time indie dev is not about making the best game possible but pleasing the biggest group possible.
It MIGHT be also that if I offer a game mixed with VN people EXPECT it to be more casual. I mean I could have better luck with a 100% pure gameplay (or almost) complex RPG, with really few dialogues. Not sure honestly, sometimes it's even hard for us to understand how things work...!

by Player00013
I finally got to play the game and I have a few questions but first i wanted to say that Cliff was the best romance, he is the sweetest character and I really liked the relationship between him and Queen Shiller while Milo felt... off, I mean he talks about he wouldn't go back to his ex and that it would be crazy yet that's EXACTLY what he does if you don't romance him or Rebecca! That was so annoying and made me dislike him. Also although I wished for Avae to be bi I can say that i no longer really care since he was felt like a side character. So I wanted to ask: when you romance Shiller how does her romance end? I never got to romance her since I don't like to romance women except for gxg. I know that unless you take her side she becomes an enemy but if you do then what? You leave the planet and never see her again? And about Lakadema, what is she exactly? A hermaphrodite? Does she has both male and female genitalia on the outside or does she have both but they are internal and she looks like she is female but with the ability to reproduce asexually? And could you spoil the other endings for me? I only saw 4 so far yet i think there are more but I'm too lazy too replay to see them all...

by jack1974
Shiler has 3 different endings based on the relationship with her (you DON'T need to be in a romance with her to do her endings).
Super short summary because I have no time (sorry):
Spoiler:
If you're in good relationship you plan to go back to the planet later with terraforming technology
Regarding Lakadema, hermaphrodite means she can be both male or female (has both genitals, keeps the male hidden "inside").
Spoiler:
She reproduces herself in one ending, if you're playing as male she's pregnant, otherwise she simply decides to reproduce with a process like parthogenesis
All times are UTC
Page 10 of 11