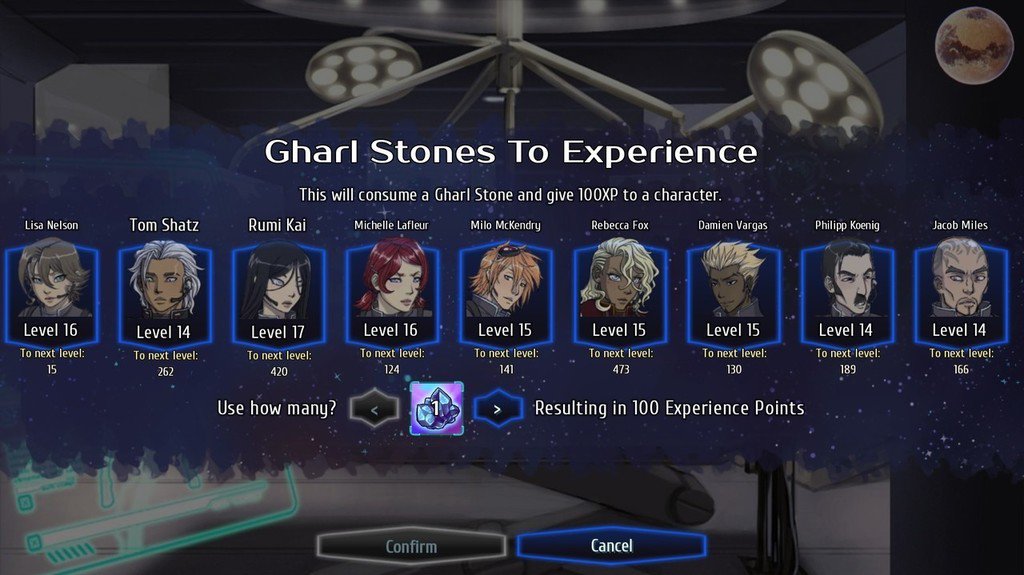 Jokes apart, another complaint I had was that was hard to keep people up to level. Even after the XP tweak changes I made, it was still possible to have some people behind. So I decided to find another use for the Gharl Stones. 100XP is a lot, but since they can also be used to upgrade the items (and with a higher bonus) I think it's fine. It can be tweaked in the game later if people find it unbalanced 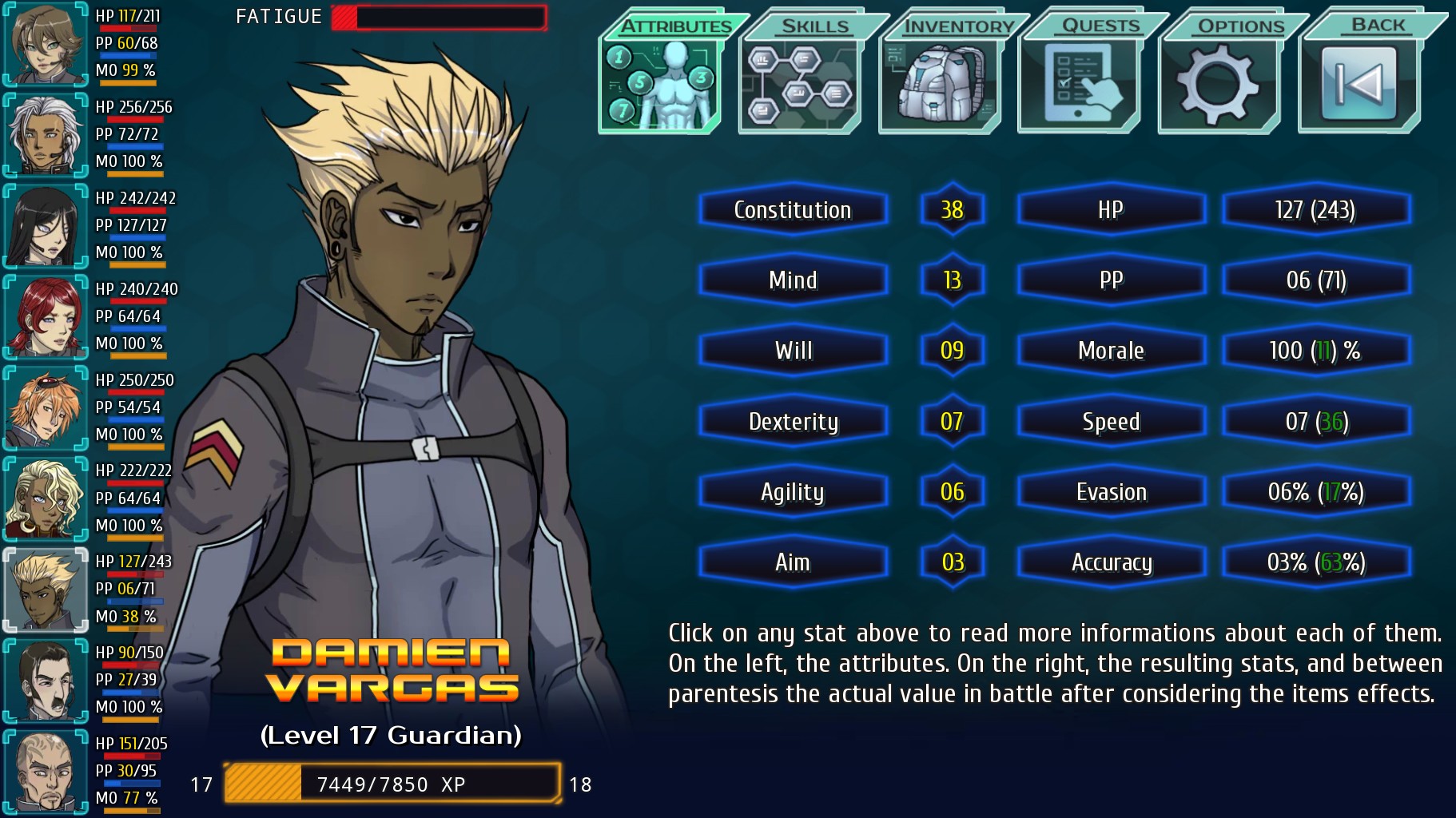 In today's update I finally think I found a way to restore the gameplay to how I originally meant it to be: I added a new thing called "Fatigue". A counter that increases every time a character fights, and also when gets KOed in the battle.
This counter will reduce in percentage maximum HP/PP. So for example if is 10, will reduce max HP/PP by 10%.
I put a cap to 30%, and will tweak it as necessary.
It doesn't make the game much harder but you can't anymore do ALL QUESTS in a single day

so certain quests become more challenging (as they should, otherwise you can play in VN mode or Easy) because of the time limit.
I did some preliminary testing and it's still easier than the deteriorating armor system I originally had, but at least it's not so easy as it was before. I tested in Hard difficulty and had to go back home after clearing the first sector, so it's good (before even in Hard I could clear all three sectors in a single day! lol completely broken).
Top

I'm not sure I understand why you jump through so many hoops to force players to play a specific way. If your objective is "player must not clear more than one sector a day", just make the player go back to base and sleep after clearing* a sector?

*Whatever you define as the "clear condition" for a given sector.
Top

It's not so simple, with an "open world" system like this, skipping a day can cause catastrophic bugs. Like ending a quest players don't want to end, etc. If I had just 1 sector = 1 quest, would be easy. There are many quests that involve 3+ sectors, some side-quests, etc. It's a mess. Loren 2 will be SUPER LINEAR

Besides this, I wanted to reproduce what was happening in SOTW act 1, which a lot of players liked - not the classic RPG where player goes swarming and destroying everything in his/her path, but something where you need to carefully plan the strategy because there isn't unlimited HP/PP regen.

Of course if ends up that most people don't like this fatigue system I'll remove it or make it optional.
Top

jack1974 wrote: ↑
Sat Jun 15, 2019 2:28 pm
Besides this, I wanted to reproduce what was happening in SOTW act 1, which a lot of players liked - not the classic RPG where player goes swarming and destroying everything in his/her path, but something where you need to carefully plan the strategy because there isn't unlimited HP/PP regen.

Fair enough, but I think you forget that a lot of players broke SotW as well, and cleared everything they could in 1 day - even when playing on high difficulties.

It just seems to me that you're putting more and more complexity in the game for the sake of very little gain. I don't mind complexity, but you know what happens with feature creep, and it also starts to feel like you're railroading people into playing a specific way, which kind of goes against the open exploration system you've designed.

But hey, I haven't tried it out yet, maybe it's just a minor inconvenience.
Top

Yes I understand what you mean, I don't want to necessarily railroad players, the change shouldn't have such a big impact especially if you don't play in Hard/Nightmare and if you rotate your team. I can lower the values too.
I'm mostly trying to avoid people complaining that it's a "skip day simulator" like happened in Cursed Lands

I mean if you do all quests on day 1 then you have to end day 3-4 times without much happening. But maybe I'm worrying too much, since in PS2 there are a lot more camp talk and also the email messages so there are many things happening every day in general.
Top

Some games that's just how it is. Delay too long on certain missions in Mass Effect 3 and they become unavailable. It encourages actually doing the missions that are "urgent". The main story quest stuff shouldn't be skippable, it should just force you into it if you haven't started by the time you run out of days.

I've definitely had the issue on both QoT and Cursed Lands where I did everything in the first couple days and then ran out of things to do while waiting for the plot, so maybe activities within a day should be hard capped if that's a concern. Like on a dating sim you can't do all activities each day; some consume an allotment of time and there are fixed numbers of time slots. Or if a player finishes all the available content with days remaining to the next main event, automatically fast forward time for them.

And maybe Loren 2 doesn't even need the day mechanic. I don't think either first Loren nor PS1 had a day calendar; events happened when they needed to. It's rather weird to simultaneously advertise "hey, look at all this stuff you can do" and penalize you the more you get done (as opposed to just ending the day after finishing a task), but I'll admit I haven't played this game yet.
Top

Troyen wrote: ↑
Sun Jun 16, 2019 9:12 am
And maybe Loren 2 doesn't even need the day mechanic. I don't think either first Loren nor PS1 had a day calendar; events happened when they needed to. It's rather weird to simultaneously advertise "hey, look at all this stuff you can do" and penalize you the more you get done (as opposed to just ending the day after finishing a task), but I'll admit I haven't played this game yet.

No for Loren 2 I won't be using this system for sure. And the first PS1 actually had a sort of turn/deadline system, but simply was applied when a quest was given. Like "kill all enemies in 4 turns" and then the deadline started. So there wasn't a global "this is day 3" as far as I can remember.
For all my VN/RPG, you can clearly see the ones that lean towards the VN or the RPG part. Loren definitely VN. SOTW definitely RPG. Cursed Lands more VN even if had a decent RPG part I think.
With PS2 I wanted to balance it a bit but probably in the end I went more towards the RPG part, even if the story won't be short for sure

But it's not what you say: penalize the more you get done. I think it add realism: a soldier who fights 50 battles should be SLIGHTLY more tired than one who never fight once

So it's not a penalty but adding some more mechanics to make the party more human and less "invincible super heroes who can fight 500 battles and not even blink".

And in any case I was just able to beat all the quests on day 1 still playing in Easy mode. Probably using the "grenades trick" I could even do it in Normal, even if spending all the money on grenades means I need to pick up whatever weapon I loot. But it's cool I think, it's the kind of decisions players should think about: do this to get instant bonus, or save money/materials for later? and so on.

Today did another update, and will be the last one for a while (unless people find some critical bugs of course).
I put some limits to the fatigue, so that it can never go higher than 30%. So you can maximum lose 30% of total HP/PP, which is not a trivial amount, but not huge as half or worse. Also, to reach that amount, you must:
- play 15 fights without resting
- or get killed 15 times in a single fight !
In practice the counter increases by 2 for each fight, and by 2 every time a characters is KO. This adds some more emphasis of getting KOed, since for example in previous RPGs people used to let them die when they had too many debuffs (they get "cleaned up" when they go KO). Of course, people can still use the "KO strategy" but at least now there's some kind of penalty.

As I said are really small changes which have SOME impact but nothing dramatic, unless you're stubborn and want to fight 50 battles on day 1 which is a bit crazy lol

The next one will be when I finish the whole game

So, starting a game to have a save ready for the next beta phase. Going to my private room on day 3, I get various errors (can be ignored) about MsSys not being defined.