by Franka
I scrap all weapons that aren't pistols, when I'm not selling them, but I buy/exchange new armor when I can afford to. Armor is not a real problem, just weapons, because my bench team can't deal damage. At all. The only armor I've upgraded is Legendary though. I did upgrade a lot of pistols from low to high levels because pistols never dropped for me, and the shops didn't carry ones that were better than my existing ones. Maybe the RNG just decided not to help me out with good drops/shops to aid my strategy, and I ended up sinking too many resources into my existing guns.

I'd probably have to start over and use a different strategy to see. I did make a conscious decision to get rid of any weapon that didn't help my A team, to get scrap and money so the A team could stay an A team, thereby sacrificing things that the bench members could have made use of.

by jack1974
Well I think also trying to play with Pistols only might be a problem, since they are a sort of "base weapon" but have no benefits of the others, like high damage/critical of Sniper Rifles, armor damaging of Machineguns or splash damage of Heavy Weapons.
Is like trying to win a RPG using only daggers or short swords

Anyway thanks for trying, is always cool to see players play in very unconventional ways. Thanks to you fixed several balancing problems! 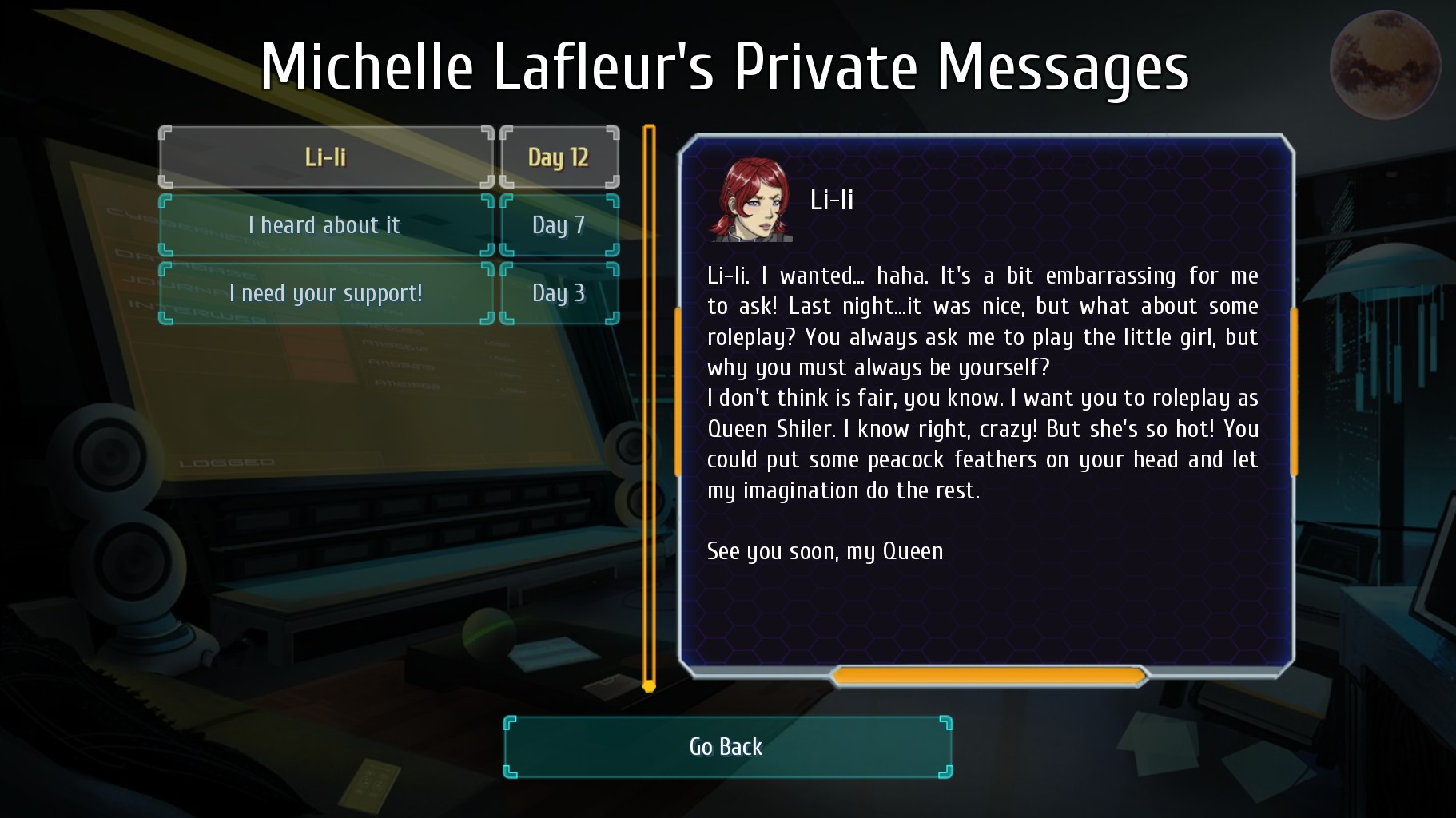 The new email system is active, and I managed to code it "retroactively", so even if you play from chapter 2 you should see all previous email (only with some wrong dates, but is not important). Above an example of a very important romance email from Michelle, only if you're engaged with her of course

by jack1974
Did several tweaks in today's update. You were right, was hard to keep a good amount of weapons/items updated. My goal wasn't to allow EVERYONE in team to always have the items full upgraded (I wanted to "force" the player to use some less quality drops if higher level) but you should definitely be able to keep at least 4-5 members fully upgraded.
Now the resources from encounters will drop proportionally to the party level, so as you go on in the game you shouldn't remain out of metal/carapaces to upgrade weapons and armors anymore. Money wasn't really an issue at least in my playthrough, much more the resources.

Also, I think I found a good use for the Will attribute: it will reduce the debuff by 1 after a successful check each turn the character moves. This is really useful in many occasions, so now I think people shouldn't consider anymore the points put in Will as "wasted"

by Franka
Glad to hear I wasn't totally crazy.

by jack1974
Not at all. It's just that while testing I do a lot of tweaks and sometimes use cheat modes, so maybe I got confused. But I loaded several saves from people, and they all had the same issue. The game shouldn't be hard because you don't have enough materials to craft/upgrade the equipment

by Winkie22
Is there anyway to purchase the soundtrack and extras separately from when you purchase the main game while its in beta?

by jack1974
Hmm no unfortunately I don't think it's possible on itchio (on Steam is a separate product so yes, but I haven't made the Steam build yet). Sorry about that!

by jack1974
Whoops, I just realized I messed up with the random encounters experience, was giving a much bigger bonus than it should have

You could have a character level 22, when in theory at end of chapter 2 you should be around level 15!!

Of course you can still use the Dynamic Levels so no need to restart, but just a warning that those who resume playing with a save at end of chapter 2 might have an easier experience because of this bug 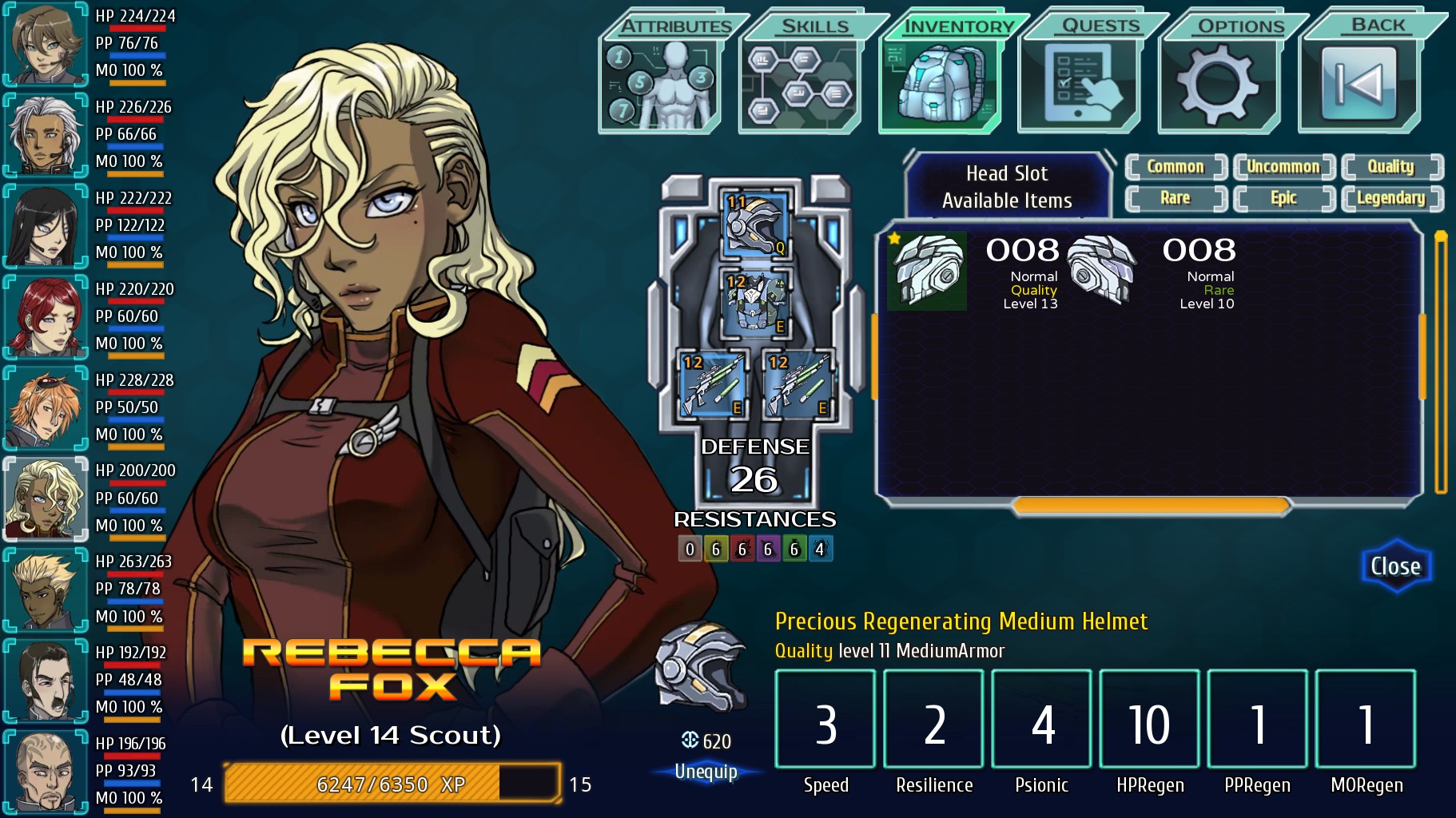 today's update fixes various things, probably the most "DOH" moment was displaying the items level in the inventory. Much easier to spot which items need to be swapped or upgraded now

I also successfully replayed the game in Easy mode with 90% auto-combat, and was simple enough. Then switched to Hard and had to do some more "divine intervention" to fix the auto-combat AI, but I was able to do the final battles of chapter 2 which are probably the toughest.
I lost some battles, but then tried a different team combination or used grenades etc and in the end I made it.
All times are UTC
Page 7 of 10