by grey_duck
I like where this is headed. The sub-skill feature that allows them to be added for checks is nice, and I like that you've put bonuses in both combat and non-combat areas.

It looks as though some of them will give improved bonuses with more points (i.e. sabotage 3 gives a better chance of first strike than sabotage 1). The only two where this seems like it would be a challenge are explosives and culture. (Although I wouldn't mind if culture slowly added info about enemies, so culture 1 shows HP/PP, culture 2 shows resistances, culture 3 shows weaknesses, and so on.)

by jack1974
Well as said, the skills in this game won't be in 1-200 range, more like 1-10 or perhaps even 1-5 (need still to think).
Culture would provide new info on each level as you said. Explosives could simply be a multiplier of the damage (your suggestion is even too much detailed lol).
Anyway the next step to have a playable prototype is to make the combat skills, then I'll have a better idea of what those non-combat ones could boost. I am thinking to have 4 class based and 4 unique skills each character though if I have 5 levels of each might be a bit too much

So that won't be a problem.

Okay, that makes me feel a lot better. I thought each character could put points into either sub-trait but there were character-specific combat/non-combat bonuses based on the way the character names were placed in the table.

by jack1974
Thinking about it better, I might have custom skill caps depending on classes. For example Psionics could have of course the max skill cap for Psionics while Soldier wouldn't be able to use that at all (since they can't also use Psionics skills in battle it would be weird) but would be specific class restrictions. 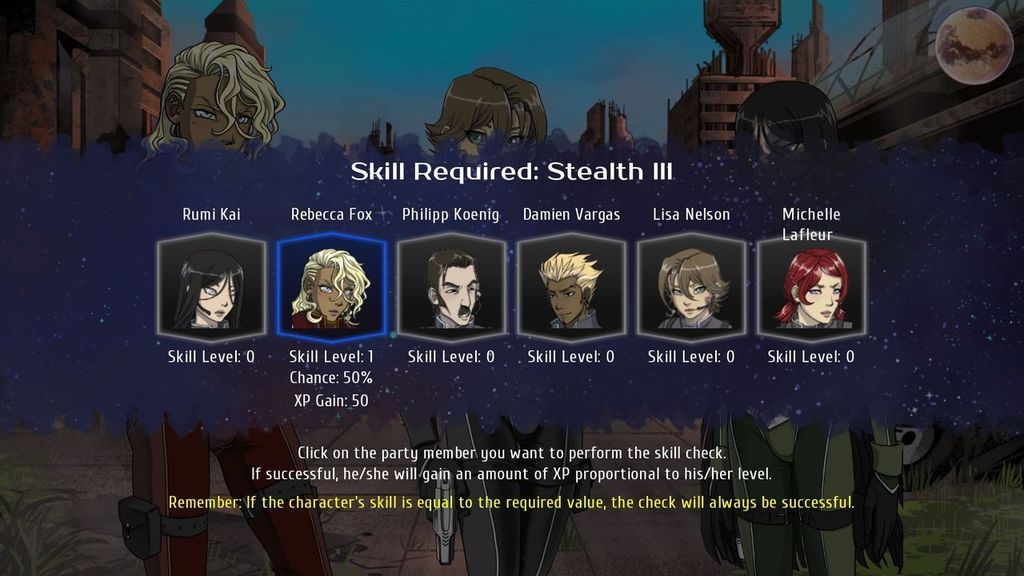 so today I've implemented a small but significative change to the skill checks. Before I was using same system of Cursed Lands, however I noticed that wasn't working well (mainly because in CL only main character had skills, here the whole party).
I decided to go back to percentage based success, of course if the skill level is the same the success is always guaranteed (100%).
Otherwise is random, but I've coded random in a way that always returns the same values

so you can reload 1000 times, and that skill check will always return that value. This should definitely prevent save-scumming!