Gigantic worms are creatures found in a lot science fiction and fantasy media. I remember them being a recurring enemy in the Final Fantasy series.
Top

For PS1 my main inspiration was Dune

But of course there are also other influences. Also in PS2 there will be some jungle scenery and other areas, not all desert.
Top 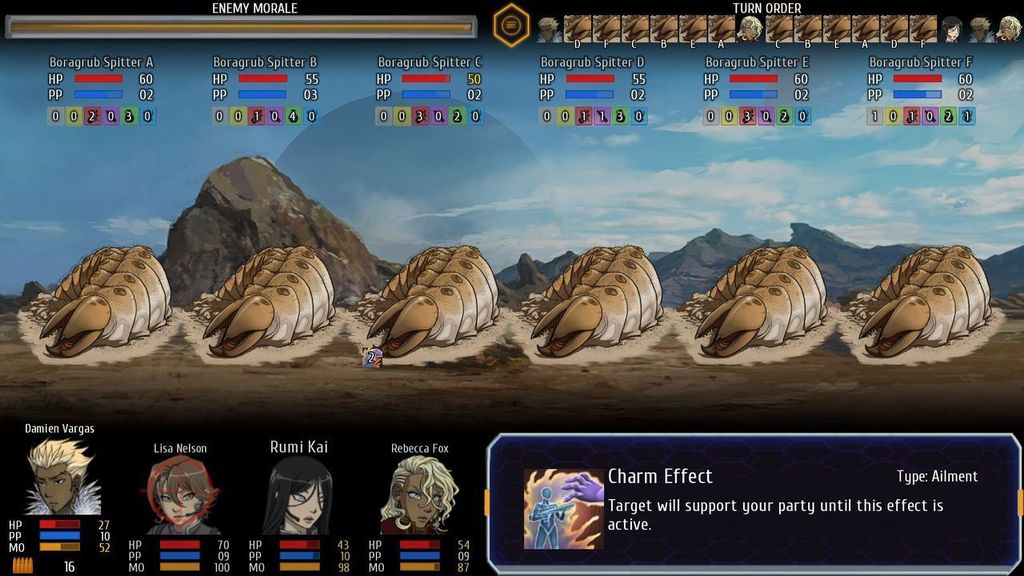 today I finished implementing the "morale failure" effect, though I'm still balancing them, so that they don't happen too often or even more than 1 negative effect at once (someone cannot be paralyzed and berserker at same time lol).
I am also checking the other skills like the charm one added in Cursed Lands which will be reused since it's a cool skill

you can have a Boragrub ally now!
Top

Right now the main issue I have is that if you equip a very powerful armor, you have enemies hitting you for 1 dmg for many times, until they manage to break your armor. Same thing for the party, even if I balanced it so that enemies would never have too much armor (on Normal level of course).

I mean the balance works, but the problem is that the battles in normal are a bit too easy right now

For PS1 it was easier because there were fixed weapons and the game was very linear. For SOTW I wasn't using the formula: damage = attack - armor/defense, and now I see why lol

So my main/only problem right now is how to avoid the early stages of battles being boring "1 dmg, 1 dmg, 1 dmg". I could probably increase the HP multiplier by a lot and have the minimum damage be a random value between 1-5, so at least could be less boring. Or cheat and make sure that enemies always have an attack higher than the party average defense to provide a fair challenge (nobody wants to play battles where you have already won even before starting).

Of course the game in general is not too easy since like SOTW you won't regenerate your armor/HP while on mission, except for the two characters in the reserve (maybe I'm going to tweak this as well).
Top 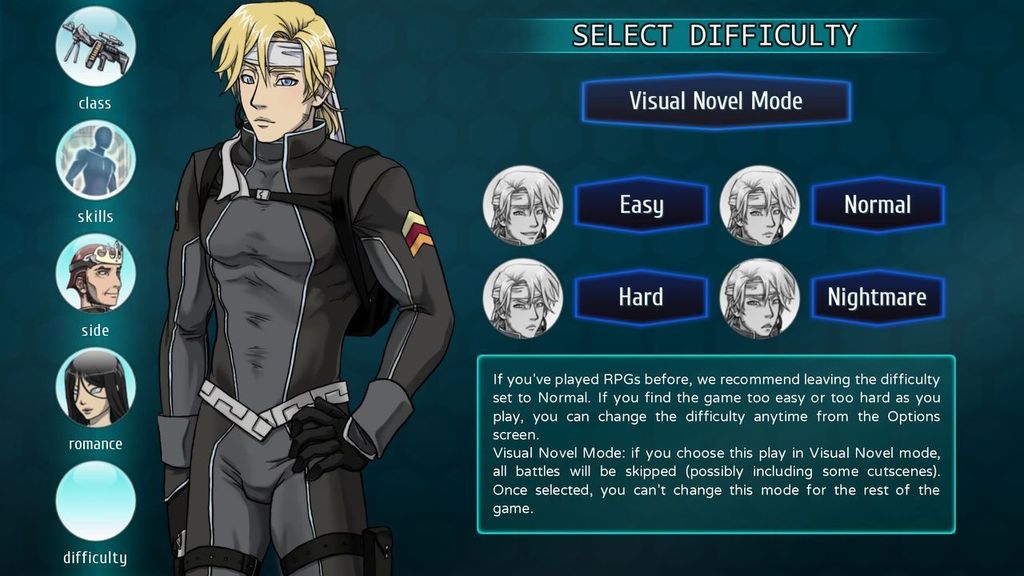 started to re-check/code the game from the beginning since I forgot some stuff like VN Mode above. I'm also playtesting all the possible routes: there's a different intro based on gender and romance combos! how I love those multiple branching games... 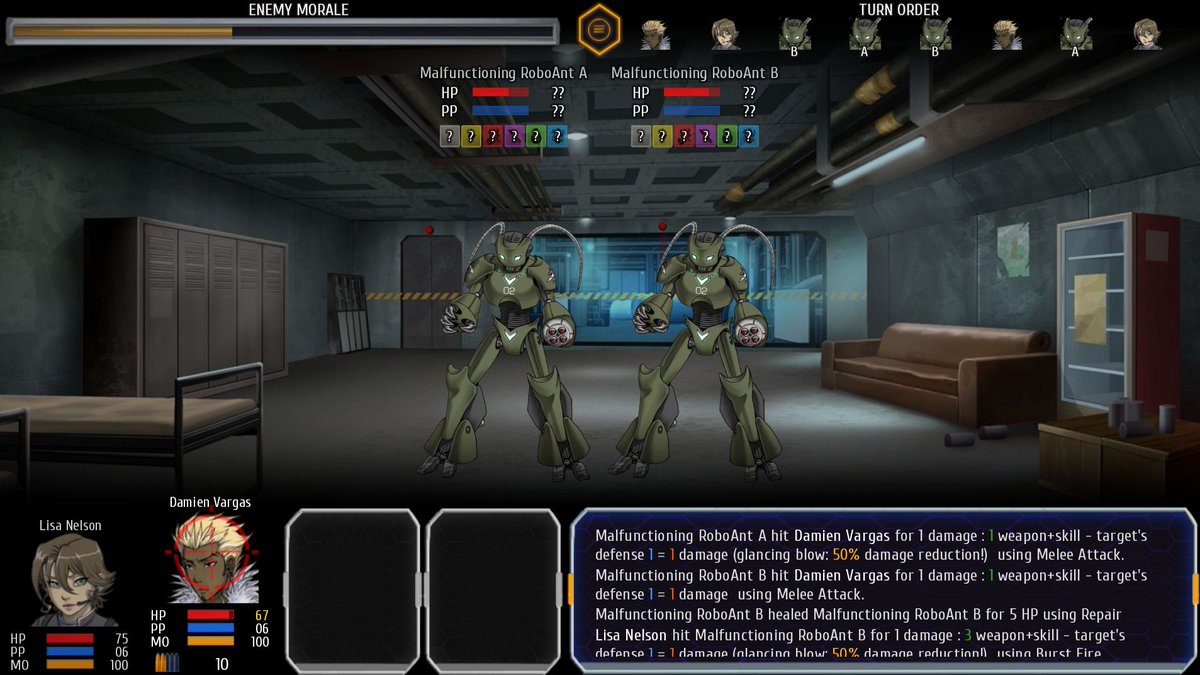 coding the first tutorial battle, I'll need to explain several things that weren't explained in the prototype (damage types, different firing modes, etc). I was thinking to have again the good old Roboant as enemies but maybe it would look bad/cheap? I mean to reuse the same enemy for the tutorial that I already used in the first game?
Maybe I can use others since I have 20+ enemies already finished

I don't think that's an issue. For one, the first game came out seven years ago, so I didn't even remember it had a tutorial. Secondly, it makes sense the compound would use the same training dummies over and over. Just because it's the same mob doesn't mean the fight is the same, especially if there's all new mechanics.

Besides, from the look of it, you're already also including Damien as target practice, so it should go differently than the first tutorial. 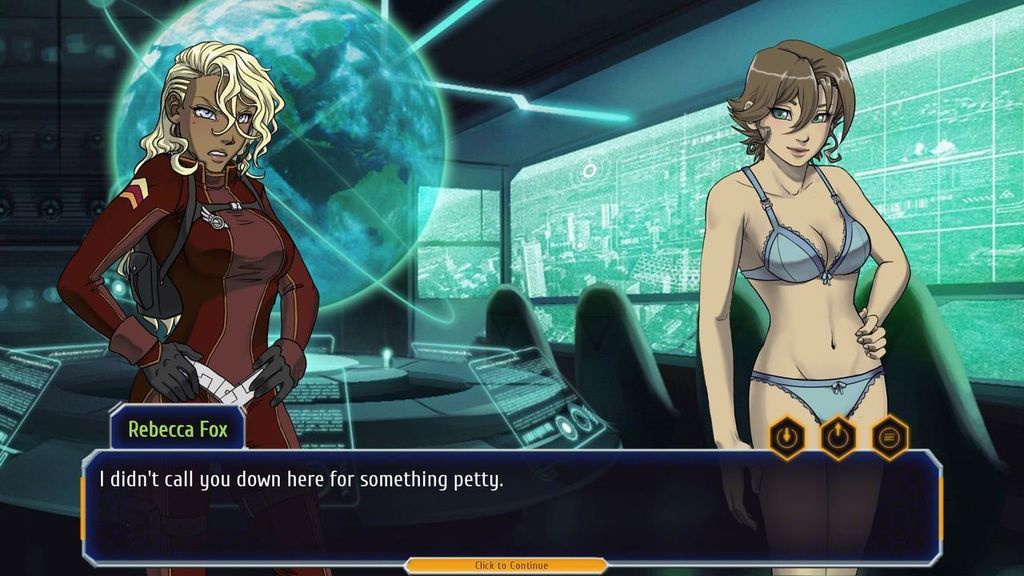 another classic "wrong outfit variable" bug. Or it's a feature!??!

Whatever it is, Jack, keep it!