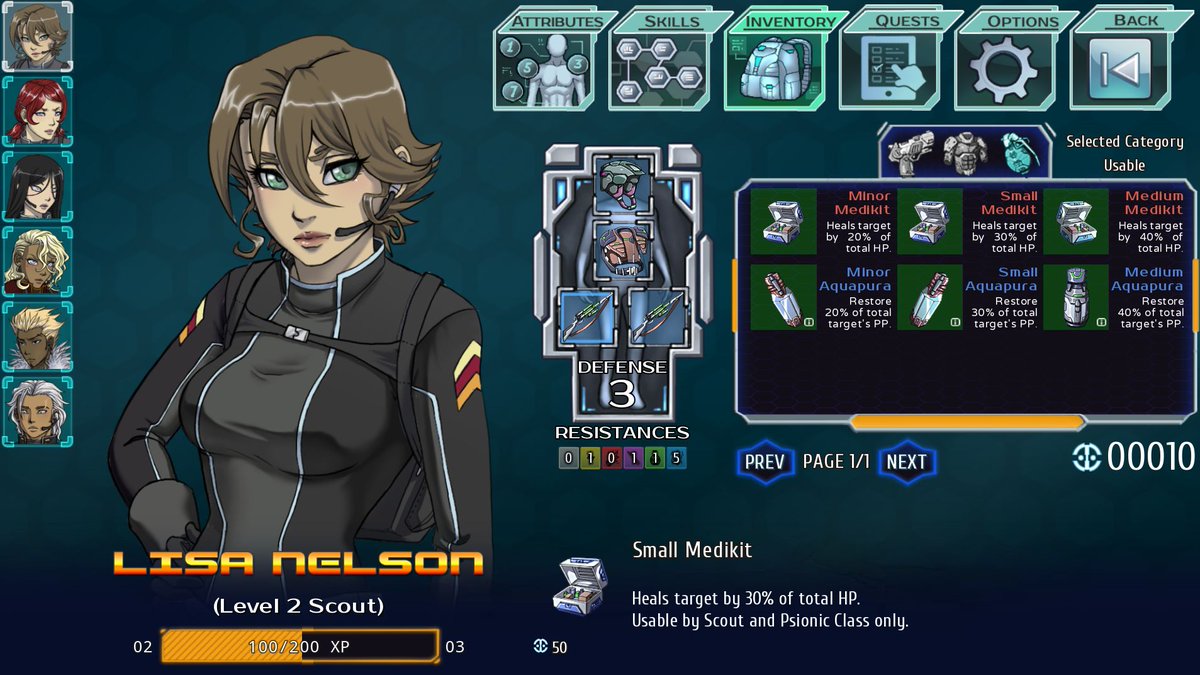 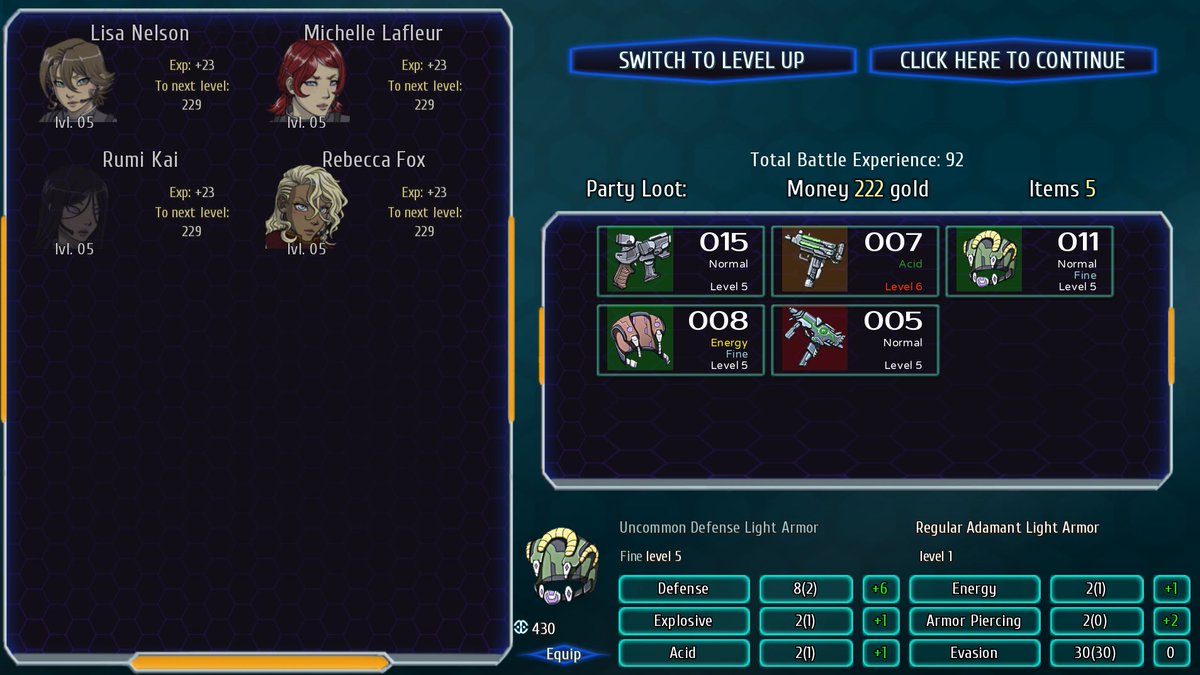 added yet another feature while I was working on the new loot screen, you can now equip directly an item from it (I don't think in previous games this was possible). I think is a nice improvement since reduces the amount of clicks 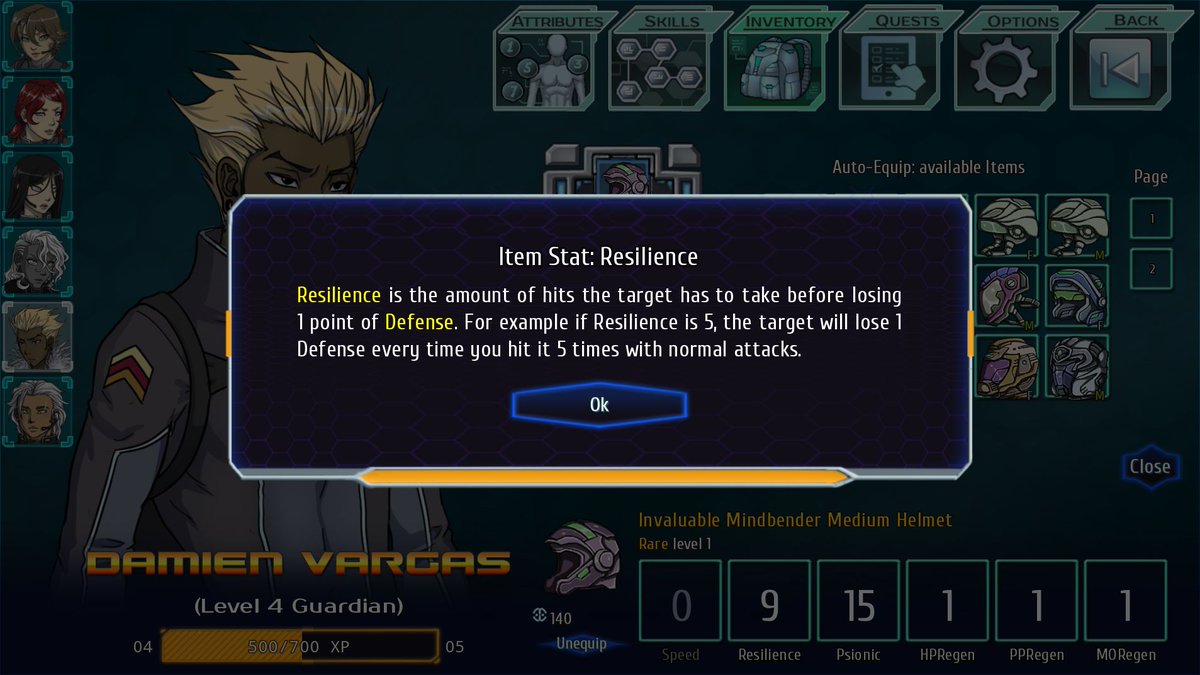 Added a new stat called Resilience, see the screenshot. The stat will be only in helmet. The chest armors will give Defense value, and helmets the Resilience. I think it's an interesting system since you could have high defense but lower resilience and so on. Also gives each class a more distinctive feel since the heavier helmets have more resilience.

Each enemy type has its own resilience value too, so for example I can have some enemies with lower defense but need more hits to take it down, and so on. Also, the machineguns skills like automatic shot or burst have now a very specific use, to bring down an enemy resilience value even if they don't do much damage on each shot.

I think on paper Resilience will be pretty strong, or at least you'd want to raise Resilience along with Defense. High resilience but low defense makes no sense because you're not protecting any defense, high resilience high defense is best, and high defense low resilience may have it's place on bursty fights but will depend on the average length of combat.

Small worry is that it will imbalance the classes by making the soldiers even more tanky, but would need to see actual combat first.
Top

Troyen wrote: ↑
Wed Jun 13, 2018 6:33 pm
Small worry is that it will imbalance the classes by making the soldiers even more tanky, but would need to see actual combat first.

Yes that was one of the goals, because with the degrading defense system I made in Cursed Lands I realized that you can't really have a tank anymore (a character that takes most hits and can protect others) so I wanted to restore this feature.

But enemies have also armor damaging skills, so there's that to consider

This will obviously have a big impact with weapons, sniper rifle high dmg but just 1 shot each time, while the machineguns will be very useful to bring down the defense of a target even if you hit them 10 times for 1 damage 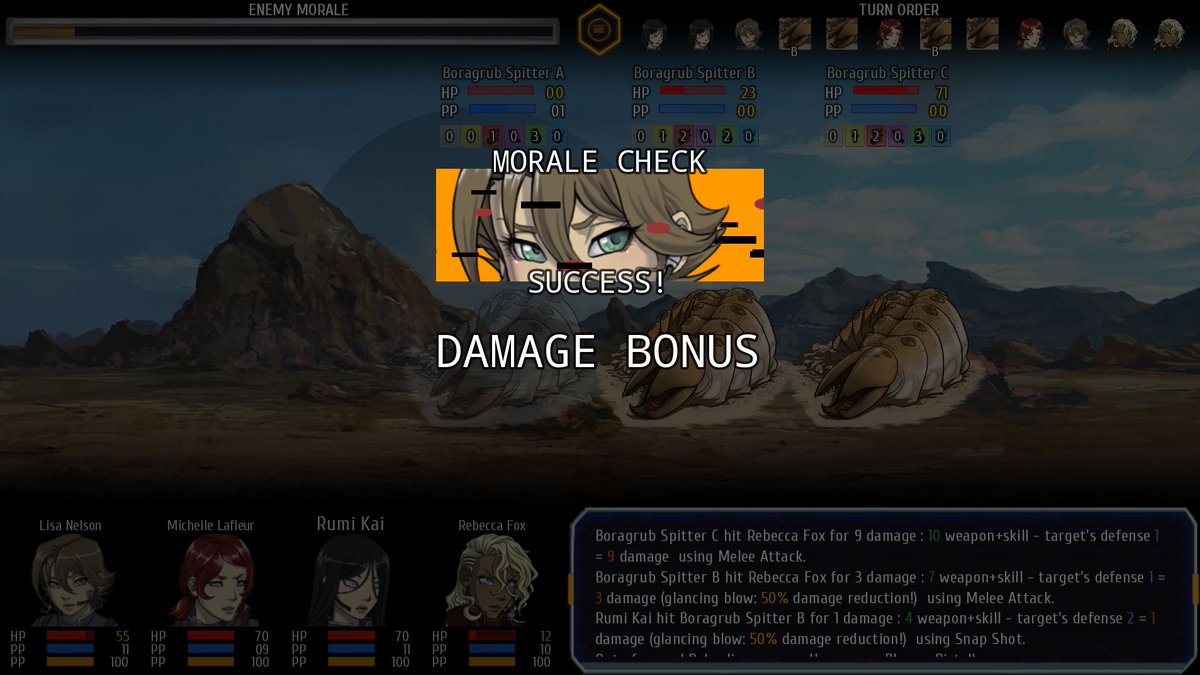 started coding the "morale mechanics" today which is the last part of the new battle system. In practice will work like XCOM or Darkest Dungeon, if the morale is too low a random condition will trigger (but will only last the battle, no long-term effects).
This should add a bit more variety to battles and hopefully make them more interesting.

For the random effects I'm planning four divided into two ranges. If morale is below certain threshold, there will be a random chance to trigger a check. If the check is successful, nothing happens and character regains some morale. If fails, a negative effect is applied.

Morale below 25 (player loses control of the character temporarily):
- panic: character freezes (automatically defend each round)
- berserk: character automatically fires to random target (user has no control on it)

I take it the yellow bar below the character portraits is morale? Will the enemy party have their own morale meter, or will be global like in Cursed Lands?

Yes that was one of the goals, because with the degrading defense system I made in Cursed Lands I realized that you can't really have a tank anymore (a character that takes most hits and can protect others) so I wanted to restore this feature.

This is one of the reasons I spent more points on defensive stats for all characters in Cursed Lands. Besides the degrading defense, there are no front/back row where beefy front-liners protect the back line. There are few protective skills available to make up for it. While managing aggro was straightforward in PS1, but in every game after, it was harder to manage or just not necessary.
Last edited by Jaeger on Fri Jun 15, 2018 6:05 pm, edited 1 time in total.
Top

Yes in the screenshot by mistake there was PP too, but will be "MO" = morale in the game

For the enemies I was using a global morale, but in theory I could have individual morale even for enemies. It might be interesting, focusing the target on a single enemy could bring down morale and have the same penalties the player has. Though for bosses that wouldn't probably happen.

And lastly yes I wanted to have the same behavior of PS1 with the aggro, so the tank had to be more resistent than others for damage, so the Guardian (not the soldier) will be the tank.

In practice comparing the classes to a fantasy RPG we would have (more or less):
Soldier=Damage Dealer
Guardian=Tank
Scout=sort of Mage maybe, big hit damage but slow delay, also can heal a bit
Psionic=Healer/buffer/debuffer
every class has also some healing/buff/defensive skills and also varies from character to character 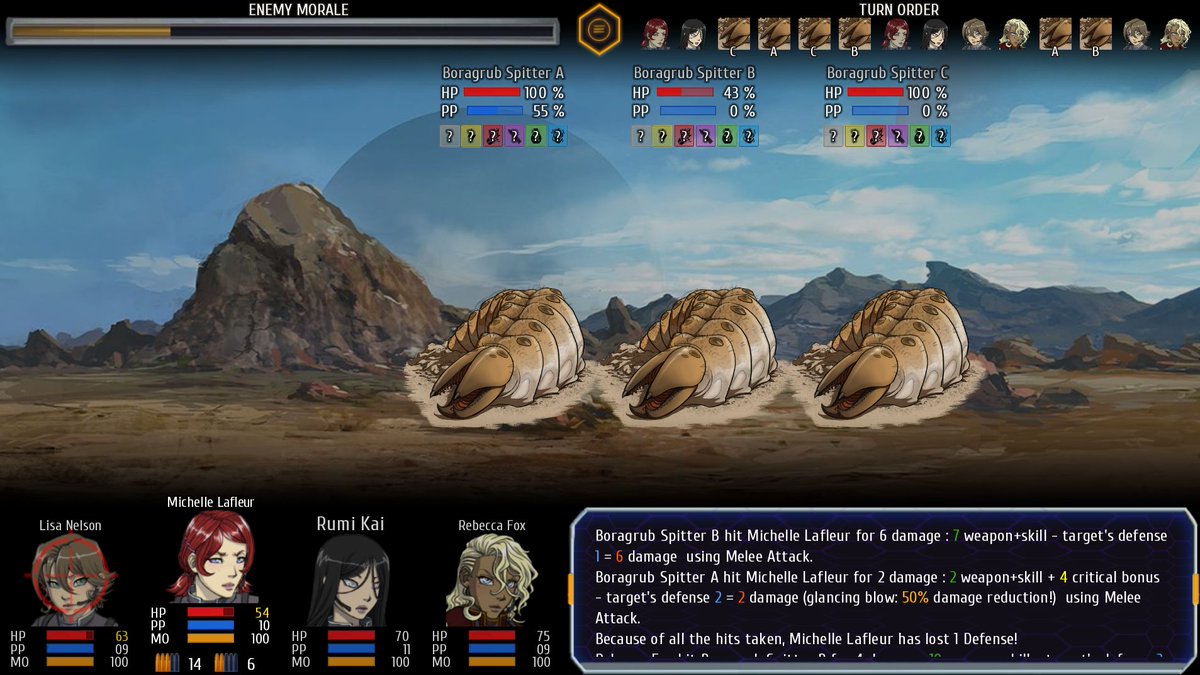 since in PS1 we had the aggro bar displayed near each character, I thought to add something here too. Another bar would have been too much (we already have 3!) so I am just displaying a crosshair overlay on the character with the highest aggro, so you know who the enemies are going to attack next.
Top

Is Phantasy Star 4 an inspiration for the game? 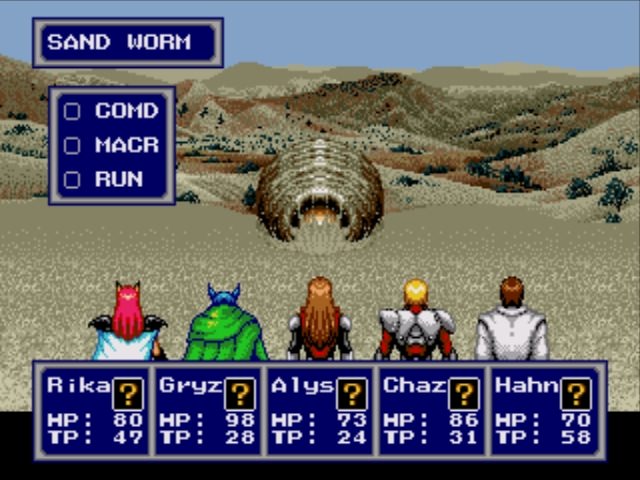