Troyen wrote: ↑Mon Jun 04, 2018 4:58 am The difference is random stats on crafted gear feels like a penalty ("wow, I wasted all those mats for that crappy item") whereas a random upgrade often feels like a bonus.

Indeed, since you have to do the fights anyway, so the items you get on the loot are like "bonus items".
The resources will work this way: during map exploration there will be some "resource nodes" which produce a certain kind of resource (food, water, energy, etc). Initially I wanted that to be just a goal for the colony survival, but then I also thought to make use of the resources to do some limited crafting.
Once you capture a node the resources keep producing each game turn/day. So in theory the resources is unlimited, but you don't have unlimited turns (after a certain X days the plot will advance).

Anyway I think will do as you suggested so the weapons produced will have fixed stats, maybe some randomized secondary ones, or depending what you mix in it. For example:
50 metal scraps + 25 toxic waste = 1 acid weapon with 50 dmg
50 metal scraps + 25 gharl stones = 1 energy weapon with 50 dmg
and so on, this way the randomness is very reduced, maybe just magazine size and reload but are secondary values and in any case are variations of a base value. For example sniper rifles have usually smaller magazine size than a SMG, so even randomizing those values you will never get a sniiper rifle with 50 bullets or a SMG with 5 bullets

Then also allow players to upgrade the weapons without spending all the resources again. For example the item above could be upgraded with only 5 metal scraps + 2 toxic waste and so on. I think this will be the best system 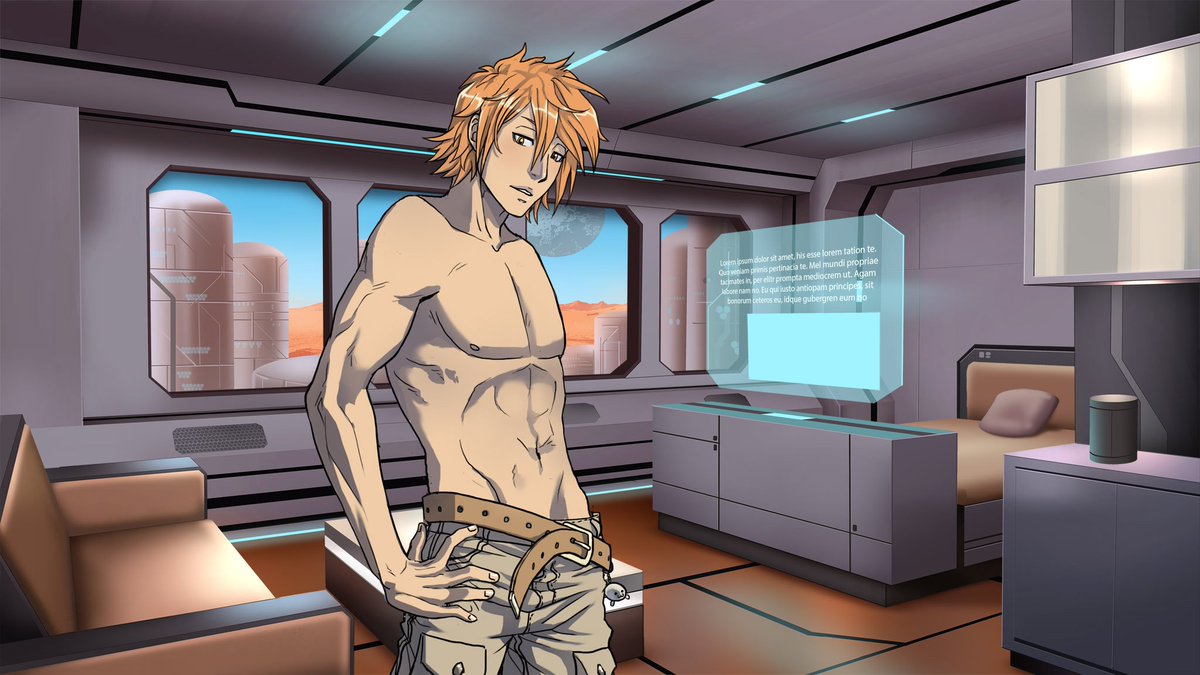 just so that people playing only for the male characters know, in this game there's something for them as well as you can see from the image above

Oh, that's nice of you to put a lorem ipsum easter egg in a CG scene for your players.

Haha I forgot to change the placeholder texts! The other people were probably too distracted to notice

Battlechasers: Nightwar had crafting system where you can use less or greater than the required item. Having the suggested items and quanitity guarantees means there is 100% the item will be crafted. If you are short on ingredients or just plain cheap, you can attempt crafting with fewer/missing ingredients, but there is a chance that crafting will fail...and that fact the game autosaves makes it even more of a gamble. Valuable (but usually rare) ingredients contribute much more to the success percentage than common, low-value items. On the other hand, adding more ingredients than what is required will increase the chances of a better quality item. Every 100% (up to 300%) guarantees a higher-tiered item with better stat ranges than their common counterparts.
Top

Yes I wouldn't want to use autosave though. It's a very bad practice, if you just have one save slot and that becomes corrupted... bad idea

Thing is I had already two skills related to crafting:
Crafting I -Increases chances of get higher quality crafted items by 2% (cumulative).
Research I - Reduces amount of resources needed for crafting by 1% (cumulative).
and of course levels up to 5 for each one. For Research is not a problem if I decide to go fixed item route, for the first one... well I guess I could always have a fixed base item and then increase stats depending on that crafting level.
Top 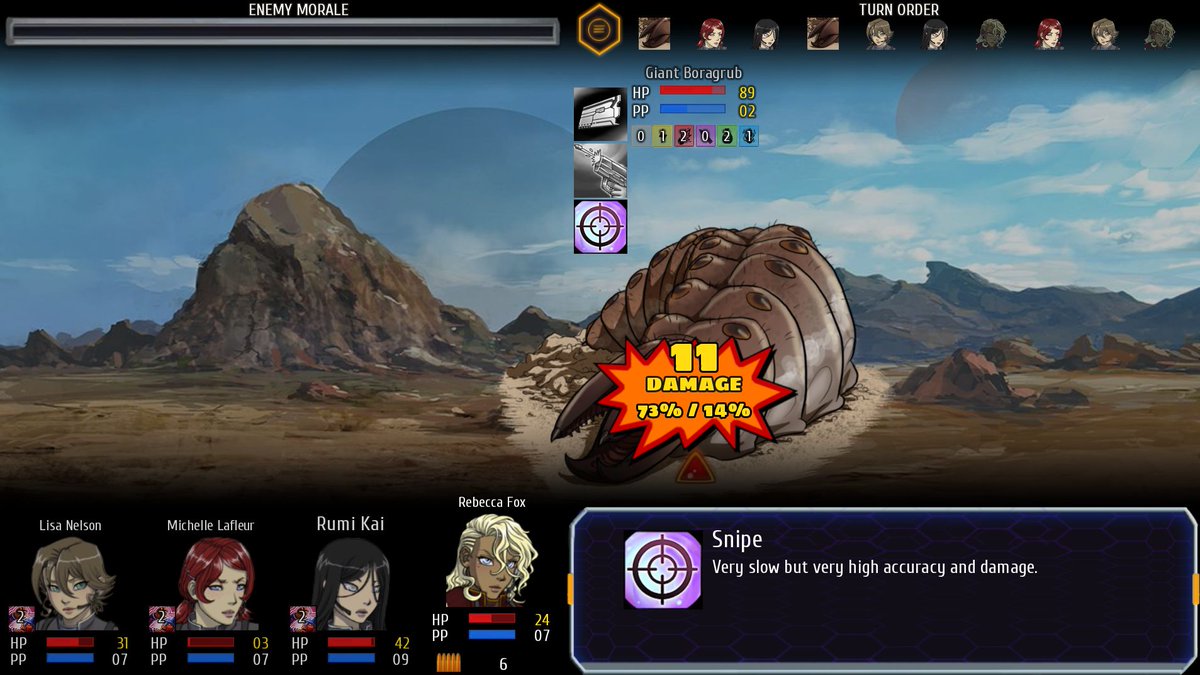 I am also trying to find another style for the damage preview. I know that is comic style and the game is sci-fi, so not sure if it's a good match or not?
Top

Unfortunately, since this is the only use for the comic-style bubble thus far, it doesn't blend well with the rest of the text displays. How about a target reticle of sorts with the damage range, hit percentages, and and other information? For examples, 1st-person perspectives from Terminator and Robocop.

Radial menus (perhaps just for targetting enemies) would be nice, although I'm not sure if it would be more difficult to implement.
Top

Yes radial menu are a pain

I guess I'll ask the artist to come up with a target GUI since I agree that this one doesn't blend well with the sci-fi theme.
Top 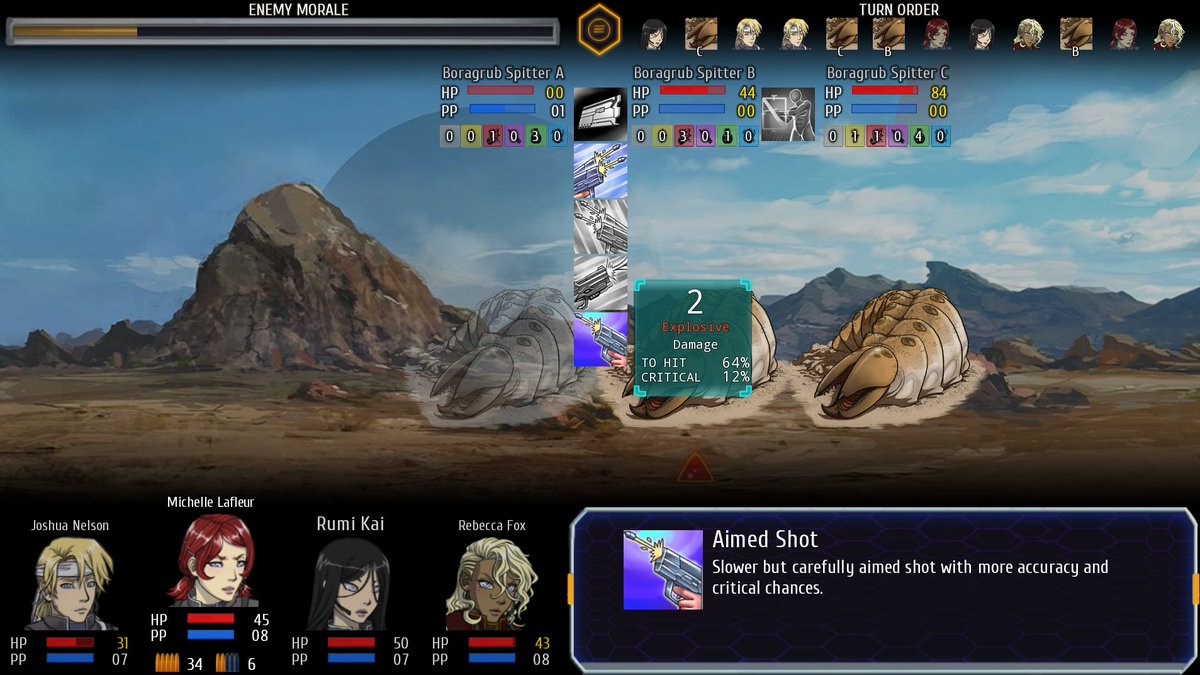 the targeting / dmg preview GUI now looks more sci-fi. I have added some animations but I've been careful to not delay the resposivity (I made some tests and even if I could add some nice fading effects players will want to see the damage info immediately).
Top
Post Reply
130 posts