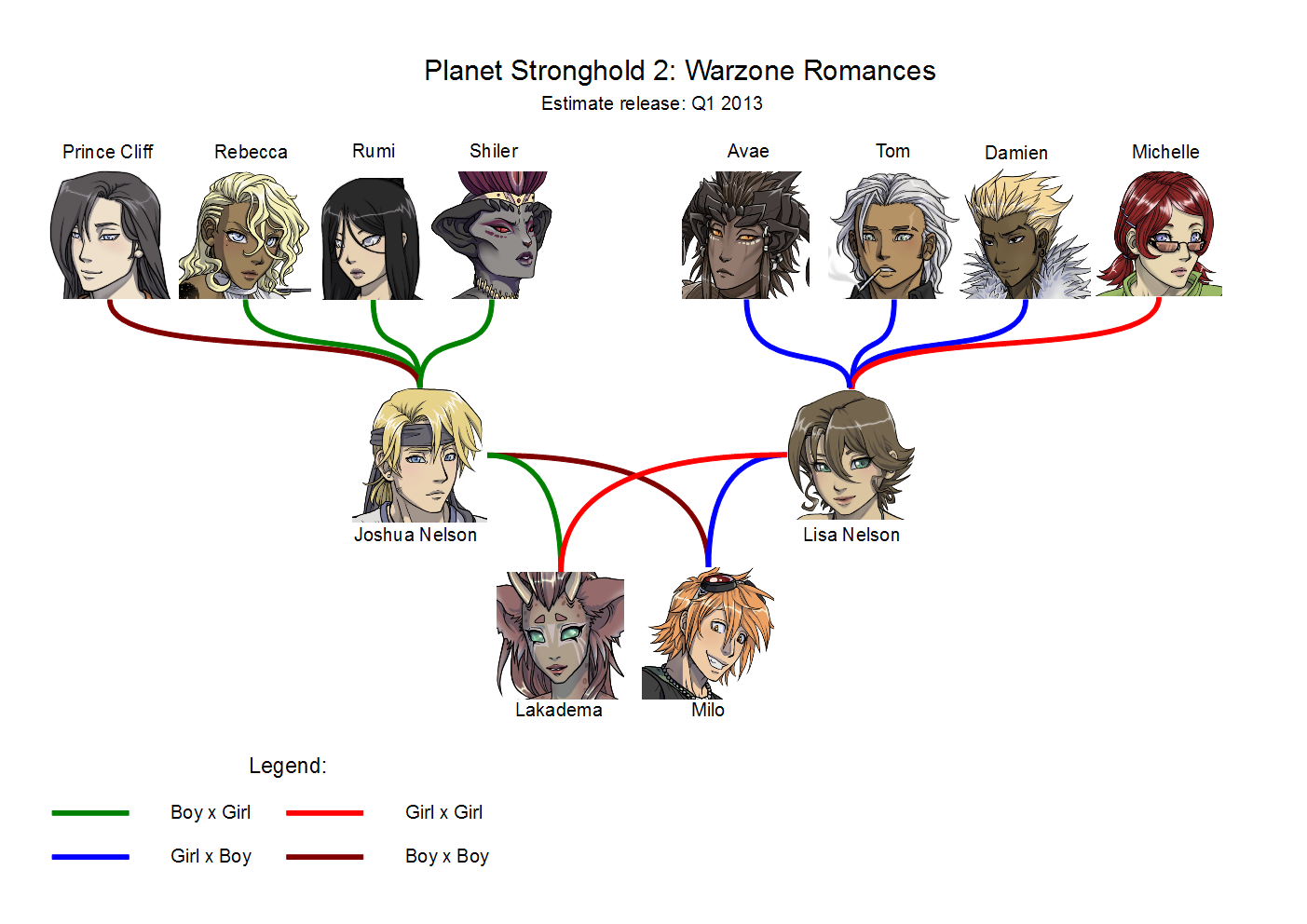 Here it is, the Bible of the romances!

As you can see, many interesting combos, and a new mysterious entry, Avae. Who he is? WHAT he is? Is he human? You'll have to wait to know the answer

Meanwhile I've been waiting new texts from Aleema like a kid eager to receive a new gift. I am a sucker for sci-fi, and I'm really happy now because two great writers are writing sci-fi stories for me (the other is Bionic Heart 2).
But really, the "romance continuation" idea is amazing. It's really cool to see how the game intro changes based on the previous romance you've chosen to keep. Some are really tear-jerking like Tom/Lisa one

Oh and Philipp is even more grumpy and with even less sense of humour!! He rulez

by Sylrissa
You've piqued my curiosity with the new man, looking forward to learning more about him, though I won't be seeing his romantic route until after both Michelle's and Lakadema's first.

I was hoping to see another woman for Lisa, but I see the balance in the chart, so it's understandable, and while I'm more excited for Loren 2 then PS2 (more of a fantasy girl then sci-fi) this is looking to be turning out really good.

by jack1974
You know is funny because until 30 years I was definitely more a fantasy gamer too. Then in recent 5-6 years I've been much more interested in sci-fi games. Not sure exactly why. I mean I still play fantasy games, and as author I like to create both fantasy/sci-fi games, but as a player I was much more excited about Mass Effect than Dragon Age for example.

by Sylrissa
I do still like some sci-fi games, like Mass effect, the old X-wing vs tie fighter games and would X-com count?.

I guess it mostly comes from playing games like the infinity engine games like Baldur's gate, Icewind dale, planescape torment, as well as the Final Fantasy series when I was younger.

by jack1974
Yes need continuity. I added Avae so girls are happy anyway

by Rebly82
I'm relieved too to have Michelle back for Lisa! It must have been a hard decision as some players would have wanted the other side of the fence. But I'm glad to be able to continue things from the previous.

by zaqzilla
Great job with the aliens! They look different enough to not look like humans with stuff on their face, but human enough to still be cute.

by jack1974
Today got Michelle / Lisa CG and is quite COOOOOOOOOL

The remaining ones are the yaoi Joshua/Cliff, and Lisa with Avae and Damien. I actually challenged the artist to make a better Lisa/Damien CG than the first game (it was universally acclaimed as the hottest CG). She said "CHALLENGE ACCEPTED". And now I'm really curious to see it

by krisslanza
You taunt me with the romance ending I'd totally get. Well. I have to actually play PS1 too but... /effort
All times are UTC
Page 1 of 8