Ah ok. Adding an arrow to show the point the enemy is facing is not a bad idea. But there will still be those "choices" during the battles like the first game had, presented by menu items to pick. Of course making them directly in the map would be nicer, but they'll be also present in the "old way"

We're currently thinking about the map and the general interaction of the game. I'll make a more detailed blog post in next weeks about it, but in practice my idea was to have missions. Check this quick mockup I made: 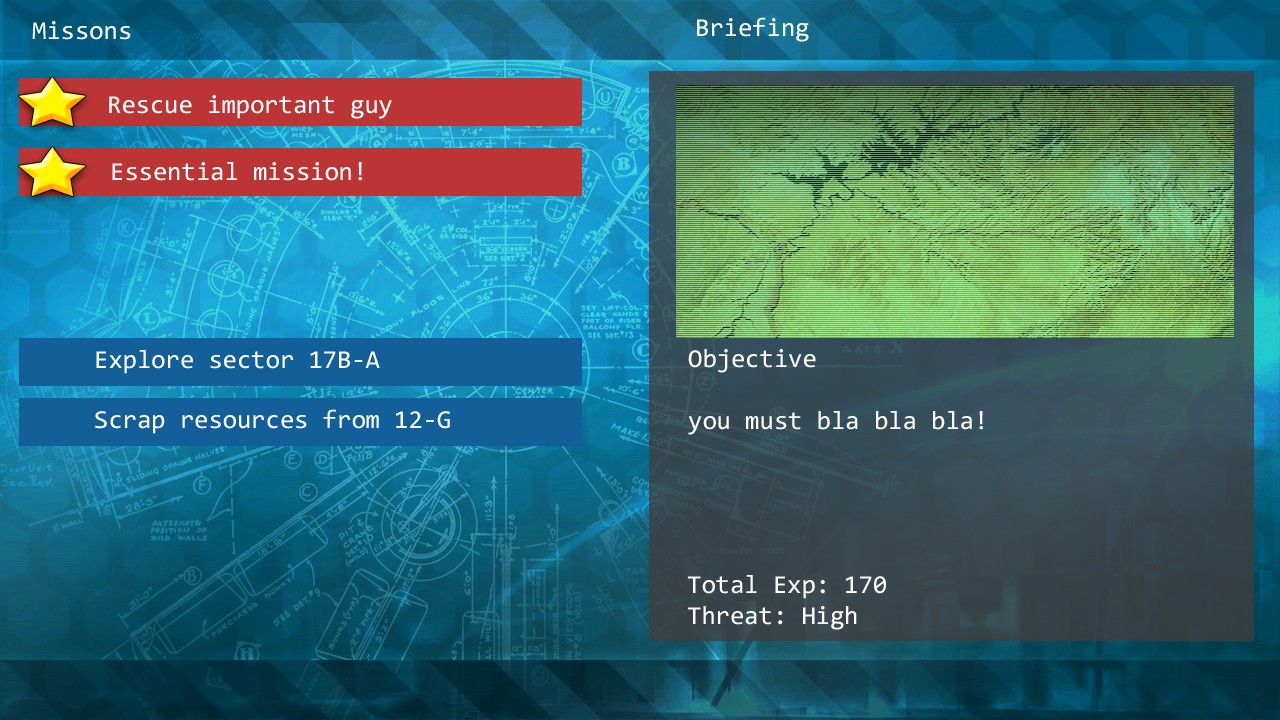 the red missions would be the one to advance the plot, while the blue one would be secondary missions, using base map but with randomized content (enemy, loot, etc).
The idea is that on Easy/Normal mode you can only play the red missions and go on fine, but since we know that SOME players absolutely like to grind, playing in Hard/Impossible difficulty means that they should also complete some of the blue missions to get more EXP/money/resources.
For the exploration gameplay, each missions has isometric maps to explore, so I really feel that there's no need to have even an exploration part at a biggest level (planetary exploration). Besides I'd like to think that after defending the whole planet they have already explored it, it's only some small areas that need to be explored at a more close-up range (a bit like the modern world warfare).

There will still be a map for your movement inside the colony, to choose which character to talk to, and so on (and yes they'll have an indicator if they have something new to tell you as requested!).
Top

I saw the words, random mission, and grind. Woot!

I like how that looks. A mission terminal in place of a journal log, for the players to read from their Data Bridge. If you can make it look more techy, it be great. Again, a nice advanced, tech looking journal log.

I personally hope the game is hard enough to warrant grinding. PS1 had a terrible point loss, and Loren was more about beating the stage before the Computer asploded.

How many maps for "blue" missions will there be?

I don't like to grind for grind sake, but if there are interesting side missions I like to do them. "Interesting" being the key word - if every blue mission takes place on the same map, only sometimes there are robots and other times there are Marada to shoot, then it is definitly not "interesting".

My personal preference would be randomly generated maps. Which may be too much effort for the effect desired... The second best solutions are maps which offer several "rooms" in which the loot resp. mission target can be hidden, so there is still some exploration to do. Oh, and of course if the maps are pre-drawn then I like to see many of them.

One more idea: While I am not sure what the map can support, features like roving guards may make the maps even more fun. Especially for those players who like to sneak through. (Some just kill anything running around, then it makes no difference.)
Top

There are already "side missions" on the map themselves, the main (red) missions: like you play a story mission to recover precious water tanks and then you stumble into a prisoner who offers you the side quest to free him. Some are even turn based, so you need to hurry.
So the blue one will be mostly randomized or pseudo-randomized map, we've yet to think exactly how it will work, but I think we'll just design a ton of maps with some predefined places where the enemies can be, and maybe some "simple puzzles" (get this key to open this). But fully random maps might be too much and beside every time I played them in games they sucked.
In practice it will be like some sandbox games like GTA or others, where there are the main missions that advance the story, and then several side missions which are mostly to grind to get money, resources, and so on, to become more powerful (which is not needed in Easy/Normal level).
Top this is the "colony travel map" I was talking about. Clicking on the top-right allows you to go outside and begin a mission

On each location a portrait of the character present is shown, and there'll also be indicators if they have something new to say or not.
Top

is rebecca a liutenant and rumi a sargeant now?
Top

Hopefully! Otherwise they might hold a grudge against Joshua/Lisa because the PC got bumped up so quickly while they are still where they were before PS1.

Ah you noticed! yes they have different suit colors now. The playing character is promoted and has a black suit, Rebecca is 1st lieutenant and Rumi sergeant. Rebecca actually looks better in red