Yes definitely, probably 7 is even too much I think. Is possible to have just 3 (weapon,armor and accessory), but with customization options so you could get same effect as a bigger inventory + other bonuses (for example adding passive skills/conditions, unlockable skills, etc, seems fun).
Top

Since this is already over a year old it's probably time for an update.
The biggest change is that the combination of skill specialisation and status resistance into the elemental system will not be practical. Mostly trough the boost system and the resulting lower number of base skills.
As you could already see in the last GUI preview we now have a dedicated resistance attribute for status effects. 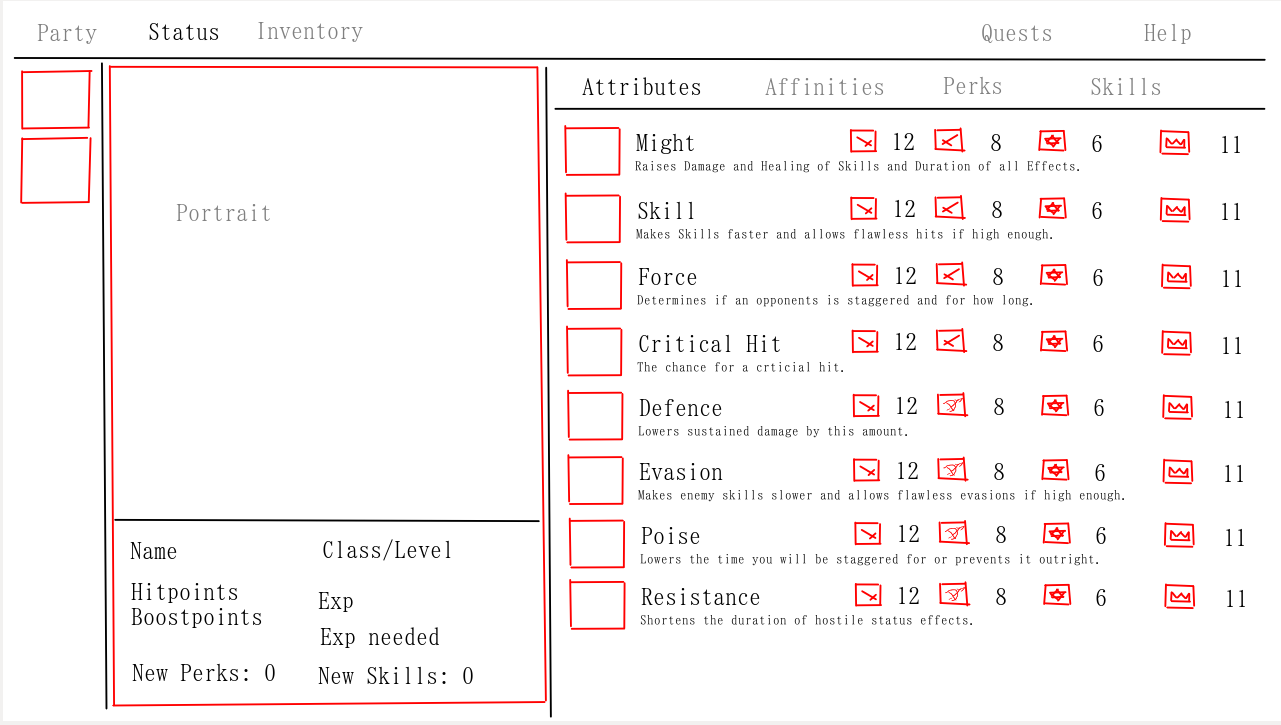 So we'll probably group all status effects into 3 or 4 groups and handle those as sub attributes of the resistance attribute. It's not as elegant as rolling everything into the elemental system but I think it will still help getting a handle on SotWs status resistance zoo.

As for how the resistance attribute works it's actually quite simple. The duration of every single status effect is calculated as:

Since you're already familiar with setting things on fire let's use the Burning effect as an example. It has a base_duration of 200 ticks and a duration_step of 20 ticks. So for every point Dracos might is higher than his lunches resistance it will burn 20 ticks longer. Of course the same works in reverse as well. If Draco, as he is quite prone to, hits the Hellhound instead of the hare the targets resistance might very well be 10 points higher than Dracos might and the effect is completely resisted. Now Draco might be the guest of honour for today’s lunch.

For elemental resistances the current thinking is to simply have a weak, neutral, strong system. Of course we'll still use the affinity system with it. So Draco being strong in Fire can throw nastier fireballs. In addition to the natural affinity every character can achieve different degrees of mastery in an element trough training. The difference is that the natural affinity can be a trigger for the boost system. So the afore mentioned fireball might have the option to literally set a weak Fire target on fire.
The nice thing is that mastery and affinity can be easily displayed with a single icon.

Currently I'm toying with the idea that every character has one weak and one strong elemental affinity. Maybe in addition to an Order/Chaos affinity. The same would go for enemies of course. In addition thanks to the boost system mentioned in the beginning a caster will not be able to have an attack spell for every element. Oh and I'm planning to have the illiterates join into the elemental party fun as well. And I'm not talking about simply juggling elemental weapons, that's not much fun. More the ability to have a properly enchanted blade burst into flames with the right boost and of course a nice bonus to damage as well.
RPG Programmer for Winterwolves, currently working on: Amber's Magic Shop
Part-time emotionless AI
Top
Post Reply
12 posts