Who is Lydia?
If at first try it doesn't explode, it ain't Jack who wrote the code.
Top

*ponders* Let's see if I recall...comes from a town/city called Callahan, among the most famous of Moon Elves, took part in an Alchemy contest in Grimoire, seduced Guard Captain Daronas so she could steal mage secrets. Daronas spilled his guts about what she did, and she lost the Alchemical competition, and she is now on a quest to become the greatest Alchemist in Aravorn.

And I'm slightly envious she is romanceable only by Saren.
Top

Yes she's one of the new characters of Loren 2 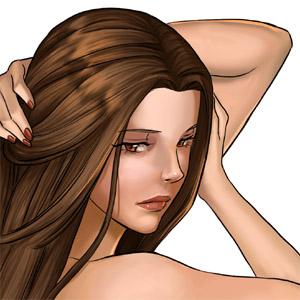 Breeeeeeza... a pity you can't see the whole figure, is WORTH IT!!!

Jokes apart... hiring this new colorist to do the pin-up images was one of my best moves so far!

That Breza pic alone would justify buying the Bonus material

though personally having seen the lineart, I'm eager to see also Loren and Myrth

Breza is the biggest tease in all your games - it takes her three appearances (game, expansion, sequel) before she is finally romanceable. That new art is pretty stunning, though.

Believe me is worth it!! Those pin-up images comes in two versions, "covered" and "hot" (uncensored). They're really beautiful pieces of artwork. Of course there's also the males, will post some previews of them too.
Top

may have to rethink doing a GxB romance my first playthrough with all these lovely ladies...as if I didn't have enough trouble deciding...gee I wonder if seeing the men will help quell my indecision