I'll go through these and suggest ingredients later if these are any good. Also, if some potion's look good, but you wish to rename them, feel free to do so. Obviously, they can also be adjusted to make other items if you wish.

Elemental Resistance: What it sounds like, basically things which might make someone immune/resistant. From here, there is:
Fire
Poison
Acid
Cold
Electricity

Elemental Aura/Effect: A variation on the above. If you want a sword which sprouts flame, or an electrical fist.

Attribute Enhancement: Basically, make someone better than they are before hand. Of course, these should have appropriate colorful names as well. Like an Strength Potion might be Giant's Might.
Attributes:
Strength
Endurance
Speed
Intelligence (actually was in Spirited Hearts)
Beauty

Weakness Potion: Basically the opposite of the above. So someone might become Ugly, Weak, etc.

Shapechange Potions: Basically allows someone to change their shape or gender for a time. You can get really specific here, so a Horse Potion, a Dog Potion, Change Gender Potion, etc. would be separate entries

Other potions:
Love Potion
Hate Potion (I could see it being a favorite by tricksters)
Fertility Potion (if someone wants kids)
Infertility Potion (opposite of the above)
Wall-Walking Potion (a favorite of thieves)
Sleep Potion
Armor Potion (makes your skin as tough as armor)
Growth Potion
Shrinking Potion
Animal Speech
Fertilizer Potion (make fields more fertile, not to be confused with the Fertility Potion mentioned above)
Plant Speech
Water Breathing Potion
Enhanced Senses - What it says. It would give you enhanced sight, hearing, taste, smell. Each sense would be a different potion
Magical Ink - the idea is that maybe it is used in magical tattoos, making magic scrolls, contracts, that sort of thing. Maybe special tattoos will have ink made from different ingredients
Invisibility Potion
Smokescreen
Gas Potion - Perhaps knocks people out or causes damage
Animation Potion - I'm thinking of the Apprentice scene from Fantasia where the brooms are animated. You could have a potion do something similar.
Petrification - Turns someone to stone
Anti-Petrification - Reverses the above
Poison - You could have different strengths of poison
Healing Potion - You could have various strengths of healing potion
Potions of Skill - These would impart various skills to people like Dancing, Horse-Riding, etc. for a time
Mana Stone - Stores up general magical power. Maybe if you have low level magic items, it could require this as a source of power
Tornado Potion - Opening it up releases a small dust devil
Earthquake Potion - Breaking it on the ground causes a crack to form
Wind Potion - Causes a strong wind to come forth
Ravenous Potion - Makes someone really hungry
Laxative Potion - Makes someone really need to go badly. This could be a curse potion
Doom Potion - Basically makes someone who drinks it the target of everyone's dislike/hate
Forgetfulness Potion
Transmutation Potion - Like lead to gold (or vice versa). It could work with other metals.
Intoxication Potion - Makes someone instantly drunk. You could also have a potion which cures this.
Glue Potion - Makes someone stuck to the ground
Grease Potion - Makes things super slippery
Halitosis Potion - Gives someone bad breath
Hallucination Potion - Makes someone see things
Itching Potion - Comes from Itching Powder, but the principle is the same.
Thirst Potion - Makes someone very thirsty
Hypnosis Potion - Puts someone under your control
Purge Potion - Induces massive vomiting
Portent Potion - Might allow you to get a glimpse of the future
Storm Potion - maybe a gas that conjures up a storm
Warding Potion - Might prevent entry/approach by someone
Chameleon Potion - Maybe not as expensive as an invisibility
Translation - Maybe allows someone to speak other languages
Truth Potion
Lying Potion - Makes someone incapable of the truth
Ventriloquism Potion - Allows one to throw one's voice
Flash Potion - Causes an immense bright light
Seal Potion - Prevents a door or something from getting open

Emotion Potions - Forgive the slight rhyme, but the idea is that it makes someone feel an emotion they may not normally do. This could be Anger, Calm, Bravery, Cowardice, Happy, Sad, etc.

Lol awesome list. Just doing all of those (or most of them) would be almost enough for the whole game (besides the ones I have already planned myself)! thanks

jack1974 wrote:Lol awesome list. Just doing all of those (or most of them) would be almost enough for the whole game (besides the ones I have already planned myself)! thanks

Thanks! Of course, they should get better names than what I put up (I was mostly looking at possible effects). And they can be altered easily enough if you don't want them in potion form.
Top

Something for the Food area: Sage.
Could be for enhancing Wisdom/granting enhancements of various things; such as

I won't have food items in general in this game, but any suggestion is good also for future use.
Top

There definitely should be something like a bracelet, ring or pendant specially crafted for Ruby. Made of... amber and ruby.

How comes I didn't notice earlier that those two are named after gems?

SimonStardust wrote:There definitely should be something like a bracelet, ring or pendant specially crafted for Ruby. Made of... amber and ruby.

How comes I didn't notice earlier that those two are named after gems?

Ahah, in the game there are some gift scenes. Let's say though that the kind of gift they exchange is... of a less romantic nature

This screenshot should give a hint: 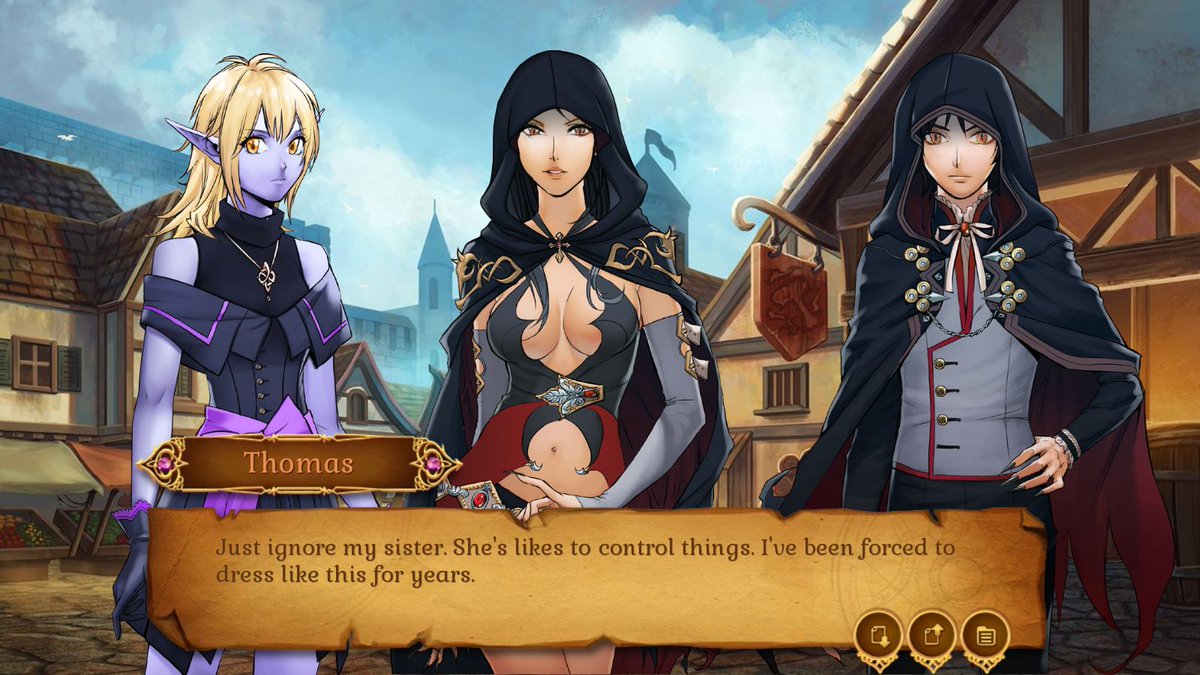 (Ruby's path is the hottest of the whole game!!)

Haha originally was going to have the jewelry done just with metal+gem, however using some "adhesive" like in your example could be fun

Tools:
Deadwood + Ectoplasm + Bone (or Death Knight bone/ingot, depending on customer/their purposes) = a staff for sending dead to next Life (a la Chambara's thing when a player goes to her during the lull in battles)/raising dead to command (as Mormont might do

)
^^Alternately, one of the Eggs + Mithril(?)...Orichalcum(?) (I don't really know much about medieval traditions on metals) = a staff to raise dead and have them restored to a youthful state

Iron + Diamond = Large, heavy-duty hammer (both for blacksmiths and as a weapon)
^^Also, add in a Mushroom of some kind for smiths--allow them to forge multiple items of the same kind: a mushroom spreads heavily through spores; that same property maybe being applied through Magic.


jack1974 wrote:For some I already have names, for others not (like various fungus or herbs).

As I see it, Parsley should be one of the herbs; I remember in a post in another thread when Amber was introducing herself she mentioned that Vin often would bring up that such was her first word. Maybe such could even be her Spirit Plant (a term I've heard used in various Faiths that are based on Nature).

Something else I would recommend is try to establish a guide where certain gems/herbs/etc. tend to be used with a specific sort of magic. Not that you have to adhere to it 100%, but Alchemists did study things, and group them by their supposed 'magical' attributes. This can also make it a little easier for the game if you have an idea to look for.

For example, with Gems you might use (this is pooled from various sources). Others will be suggestions since I don't think you want to add more gems

Finally, some of these will have overlap.

The one Gem I left out of the above is Azurite since it isn't commonly mentioned. Maybe it could have control of Magic. Sources I do have say it is good for traveling out of body and channeling. Maybe it could also be used for summoning/banishment.
Last edited by Miakoda on Thu Oct 27, 2016 1:56 am, edited 1 time in total.
Top
Post Reply
45 posts