Yes it's a mix of crafting (obviously) but also economic simulation, running the shop, buying the ingredients at best price, etc. (there will be random events that alter the prices dramatically for example).
It's hard for me to see the big picture as well, because I'm adding features as I go. With a RPG is easier, you know what you need to put to make it fun. With this game is definitely harder!
So that's why I said that if in the end with just the automatic crafting the game is not fun/interesting enough, I could do the minigame, turn-based (the one I played in EQ2 was semi-realtime).
Top

I'm thinking that once I got the basic gameplay done, I'll put out a beta demo. Without story, just the gameplay, to see if it could work/people like it, and then go from there. Adding the story as last thing will be easier once gameplay works

Will there be any points in which we can forage for ingredients? In the map posted a while back for instance, there were 2 forest areas, as well as a marsh.

I could see berries, roots, barks, leaves, and stones coming from the former; and brackish water (maybe for imbuing something w/ stillness? [a potion to promote sleep to someone w/ frequent nightmares, for instance]), reeds, and maybe even marsh gas being harvested from the latter.
#ChambarasArmy #ChalassasFreedomFighters
Top

Yes I need to add that. To be honest this part is quite hard for me because of language barrier

I think will ask the help of some writers or people here.
Top

To me, crafting is more interesting when it gives you some flexibility or creativity in synthesizing your items.

Skyrim's smithing was not much more than combining specific materials. It's alchemy system, on the other hand, allowed the player to experiment with different ingredients to create unique potions or poisons.

In Atelier Ayesha (I'm unsure about the rest of the Atelier series), you needed to acquire a recipe. Some recipes require a specific a item, but usually you have at least one choice of ingredient with a given category (fruit, ore, etc.) The quality and properties can change depending on the ingredient chosen.

That being said, this may not work in the context of a business simulation, where you are responding to the market rather than what you personally use. In that case, you use incorporate time management. Will you sell cheap trinkets that can be cranked in a few hours, or spend a couple of days carefully crafting a special item to sell for much higher price? The 5 skills you have in mind can be used to either create higher quality items or yield greater quantity of materials in less time.
Top

Wow it's a while since I haven't updated this thread

Yes of course if there was also a RPG part, things would need to be done differently. The ingredients could come from looting enemies/creatures, so you might want to kill certain type of monsters to get specific ingredients, or craft some potions using an ingredients that maybe would give you fire resistance bonus, etc etc.
That's also why I didn't add a RPG part to this game, would be quite complex - especially if wanted to have a lot of recipes.

I might reuse this system in RPG with a much limited/restricted scope, like for PS2, I think could be interesting if there was the OPTION (since not everyone probably likes it) to craft items and stuff from enemy loot or gathering some ingredients during missions. But there wouldn't be 250 recipes like in Amber, I could get away with it since it would be a RPG, and not a crafting simulation

Back to Amber, today uploaded a video showing how the automatic crafting works (it's very simple actually):

simply clicking on one of the two buttons, the game will automatically pick the ingredients for you (assuming you have them!). So you can make higher quality (but more expensive) items, or cheaper quality ones. It could be useful for example if a task requires you to craft 25 copper ingot in a week, but doesn't matter about quality (or has minimum target quality of 50 or something).

The original system is much more complex, but I thought to keep that one only if you click the "Manual" crafting. Since I guess most of the time players will want to do it automatically. Also, you can always craft it manually, so it's not like you CANNOT do it, if you really want.
Manual will be probably used when you want to balance stuff, like you know you have enough ingredients for a final result of XYZ quality, and you want something in the middle (not highest or lowest quality).

Also, if we manage to add the "recipe discovery" feature (I really hope so since would be cool!) this is also where players will experiment with ingredients, trying to uncover new recipes

This looks more and more awesome all the time, Jack!!!

Thanks, today I'm going to add the various shops, including random events/seasonal changes

I lied, yesterday took a break

Today though I started for real: 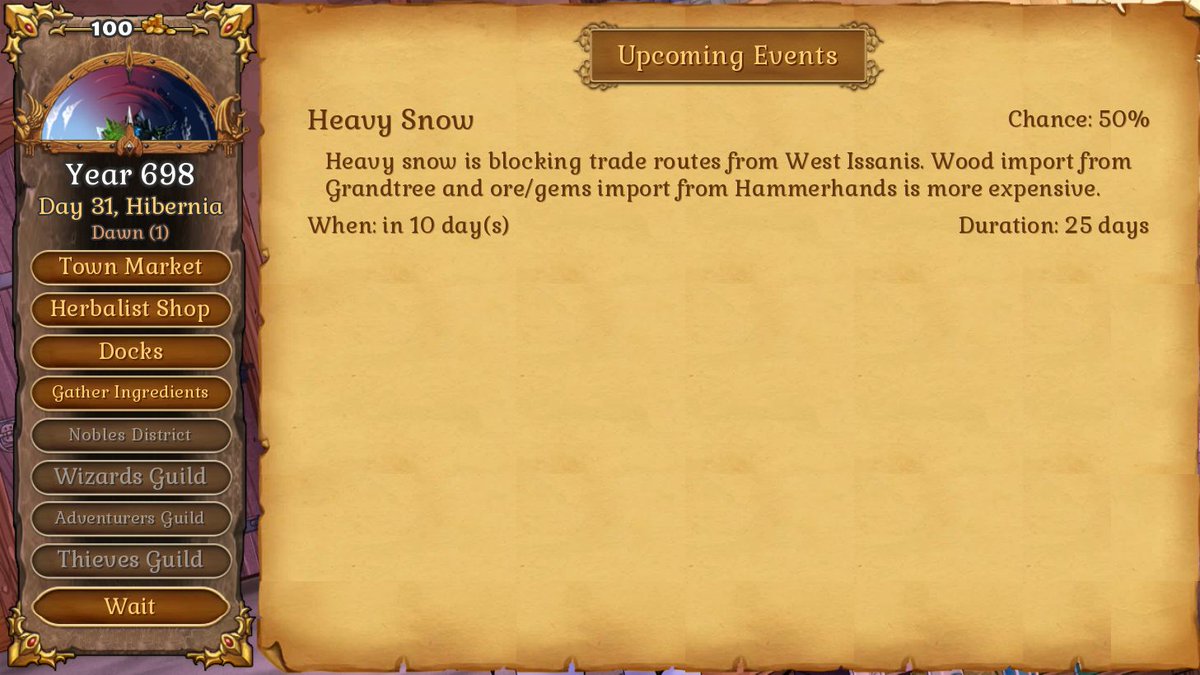 I'm going to do first the seasonal events, which have a good chance of happening during a specific season.
In the game you won't be able to see a summary like this until the event itself triggers, OR with the "aviary room" (I need to find a better name lol). Basically I had the idea that you can have a sort of room with crows bringing news at light-speed from all around Aravorn. If you build that room, you'll know a few days before the event triggers, so you can do all your own market speculations

*Importing wood from Grandtree and ore/gems from Hammerhands is more expensive.

Are you also planning non-seasonal events, like a band of goblins ransacked the last caravan from X, so temporary price surge on whatever they were carrying?
Top
Post Reply
28 posts