Currently the tough choice at the 5th scene is just an alignment change, and will show a different 6th scene, but nothing else. I have considered if making that choice more important or not, but I think will wait beta testing and see users' feedback.
On one hand I don't want to make getting all the different endings too hard, but shouldn't be too easy either.

Right now there's a scale from 0 (Dark Plus) to 9 (Light Plus). But since there are still 5 choices in adult age, you can basically get any kind of ending anyway.

So I could change the range of the scale maybe to 0 to 19 or something like that. This way, if the 5th tough choice gives a big bump either in Light/Dark alignment, it could be hard to "recover completely" in the adult age, making that choice more meaningful.
It wouldn't lock ALL the endings, but maybe only the extreme opposite. Like, 5th choice is dark, you could still get Dark Plus, Dark and maybe Light ending with that character in the adult age, but not Light Plus.

Thinking about it better, I will probably do that for the demo already

. Since it seems the best option, otherwise that tough choice seem less important. After all I unlock VN Mode after the first playthrough so replaying shouldn't be hard (and the trick of saving before the 5th scene of each character is still valid).
Top 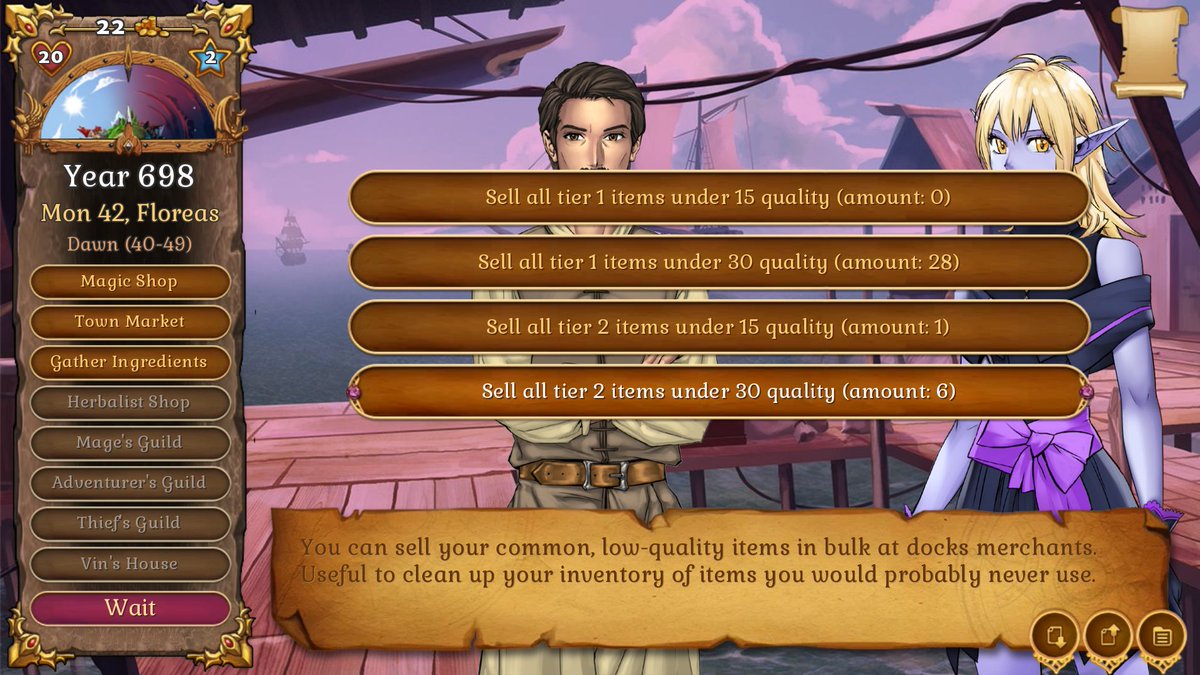 speaking of new features, now you can sell in bulk low tier/quality items. Useful to get some quick cash from the items you gathered (usually you would never buy low quality items in shops, and only get them through gathering).
Top 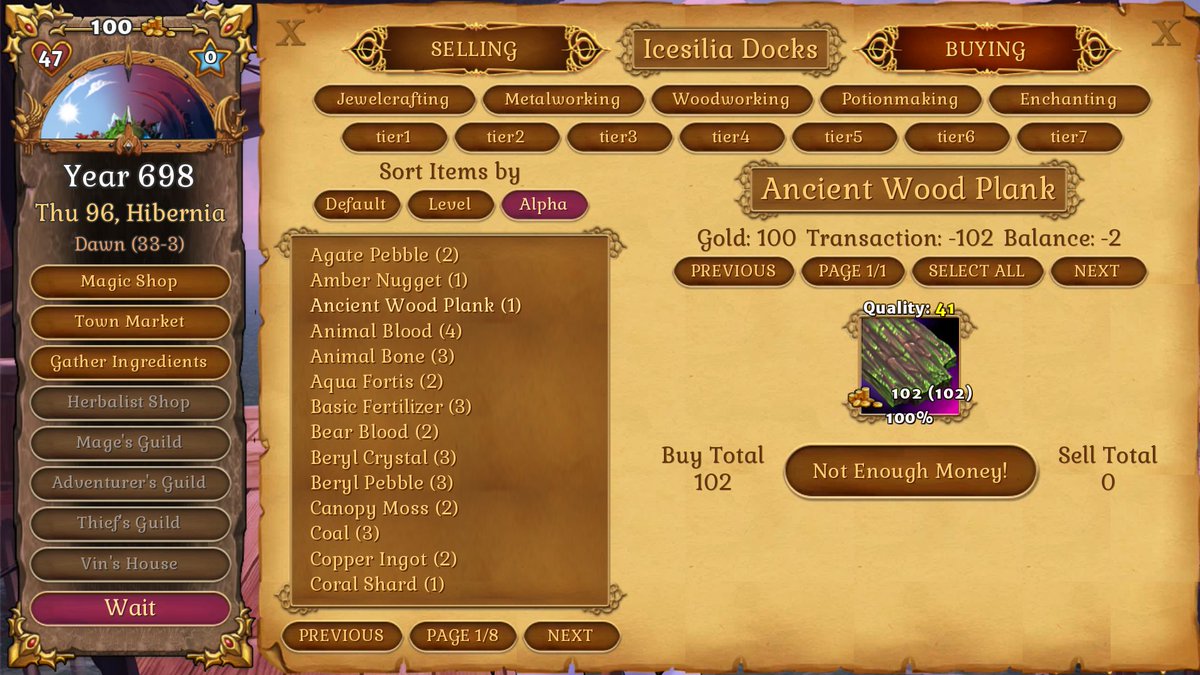 Yesterday Anima sent me the vendor fix. This morning after some code tweaks, I managed to make it work!

I also changed one sort type. There are currently 3:
1) Default: sort by type, then level. So you would see first the jewelcrafting items tier 1, then woodworking tier1, etc
2) Level: sort purely by level, no group based on the craft type
3) Alpha: sort based on the name. This is the one I changed, before was sort by group. But honestly the first choice was the best for that thing (also you can use the tag/filter buttons at the top!)

With the last feature I have in mind to code today, the "auto search clicked ingredients on all known shops" will probably make browsing the vendors more a curiosity than a real need

Once I manage to code this "multiple-shop search" feature, I'll then start testing the game until the adult age and build the beta demo. Not sure if it will be ready by tomorrow, but for Friday I'm 99% sure the beta demo will be up 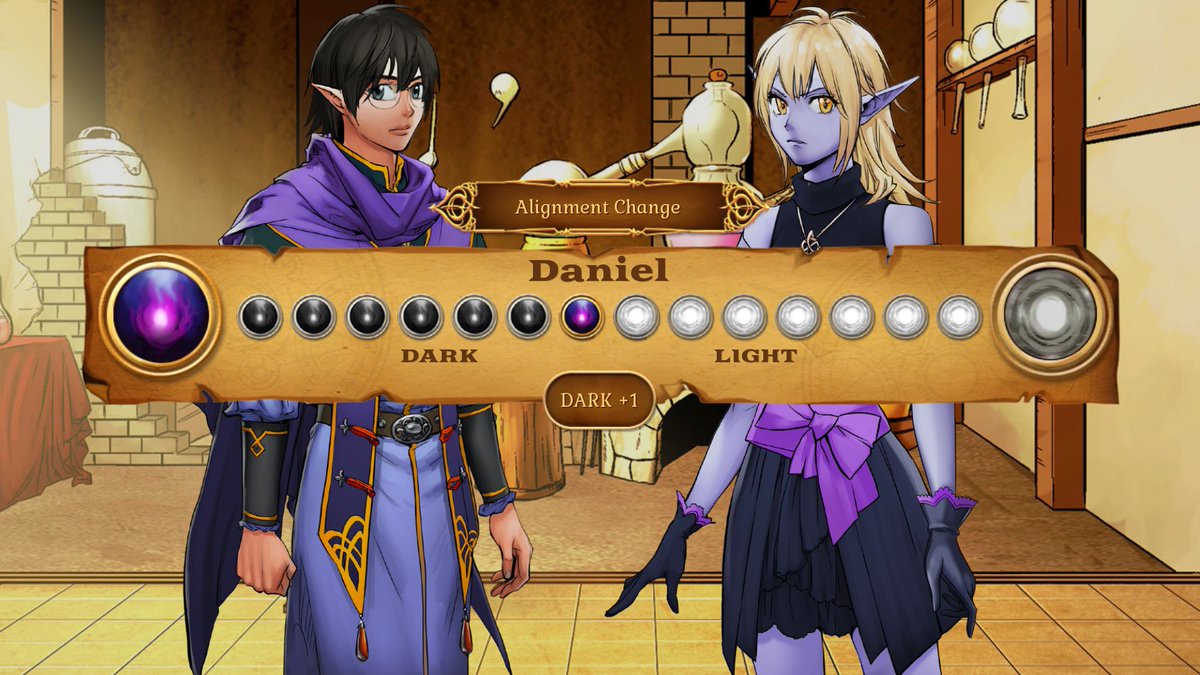 I've also implemented the "bigger range" for the characters alignment and also changed the alignment screen display. Before was displaying Amber's current alignment change based on the choice. I thought about displaying two bars, but was totally confusing.
So instead I only display the alignment change of the CURRENT CHARACTER (or love interest). It makes more sense, since you can always check Amber's alignment in detail in the status, and beside Amber's alignment matters only in the alone endings, while for the characters endings it's more important to see what is the value after each choice (in the status screen I only display a text for each character, not a full bar, would be too messy otherwise).
Top 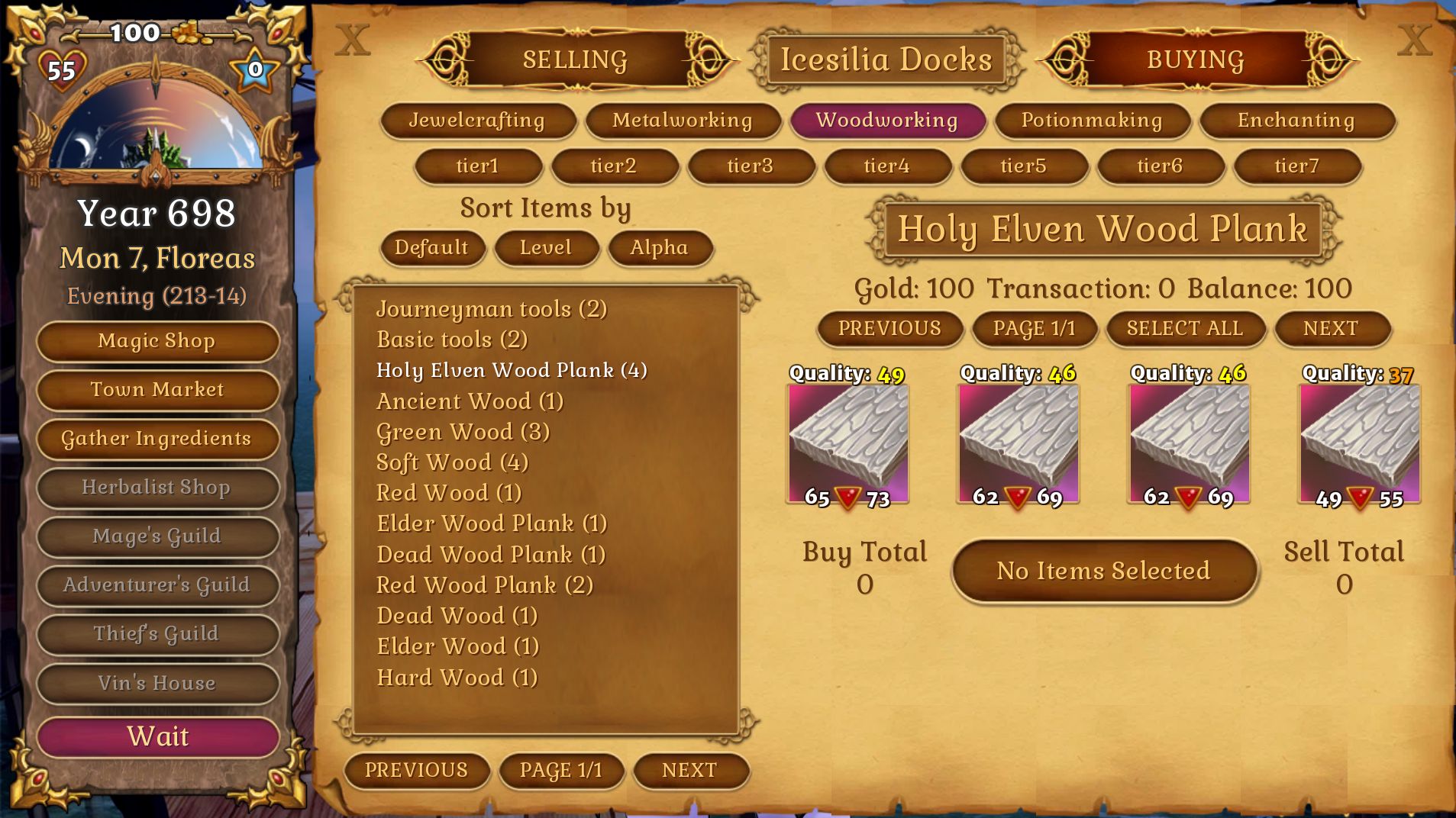 What do the numbers and triangles at the bottom of the items mean? Prices being lowered?
#ChambarasArmy #ChalassasFreedomFighters
Top

Yes the first number is the current price, the second is the "original price". So indeed the red arrow down means the price of the item is lower than normal

(due to a random event)
Top

So instead I only display the alignment change of the CURRENT CHARACTER (or love interest). It makes more sense, since you can always check Amber's alignment in detail in the status, and beside Amber's alignment matters only in the alone endings, while for the characters endings it's more important to see what is the value after each choice (in the status screen I only display a text for each character, not a full bar, would be too messy otherwise).

Do each of the characters become influenced by the player's decisions? Or is it something they have on their own?
The way this was worded confused me... (Sorry to be a bother w/ all these qs...

Yes like I explained a while ago. Each choice influences both Amber and the character she's talking to (or the related scene).
However before I was only displaying Amber alignment, not the character. In the status screen there was a summary, but not very accurate.
Now at least during the choices you can see how many points you're missing to get the Dark/Light Plus endings

I tested a lot today, and honestly I'm starting to have doubts about the whole game now

I mean the crafting part is quite repetitive after playing for long periods, so I'll try to find a way to speed up things for those who want to skip it. Probably such games should have a RPG combat part, but since I wanted the game to be out this year and not in 2-3 I couldn't add it

We'll see, some people said Always Remember Me or Spirited Heart gameplay was super repetitive, but others loved it. Maybe I'm just too burned out playtesting it to appreciate the game, not sure.
Or maybe are my usual pre-release doubts