Anything not related to one of my specific games, like general polls or promo/sale announcements. For general talk about games, go to the Golden Lion subforum
Post Reply
59 posts

jack1974 wrote:I think you might be right. Considering females are (by far) my biggest customer base, it could be a good explanation.
I'm trying to convince my wife to watch Battlestar Galactica since years, unsuccessful

Some people on twitter said that it can't simply do the equation "females don't like sci-fi" because of all the ones who played mass effect. Which is true, however maybe because was famous and people got to know (like you by friends or reading online) that there was romances. I surely don't have the marketing power or word of mouth of Bioware

Only 18% of the people who finished Mass Effect 3, did it with a female Shepard, so its not that popular with the female crowd as it was with the male one.

But then the internet in general hated ME3 so much that it's amazing anybody even finished it.
Top

Actually on the articles I found on internet they say that 18% played as female shepard, not FINISHED it. So that's different!
Anyway, digging the stats more, it seems the main issue for my sci-fi games was that you couldn't play as female. So that seems to be the real reason of failing for Bionic Heart 1/2 (even if in the sequel you could actually play as female, the multiple PoV was probably a mistake). PS1 did fine, yes worse than a game like Always Remember Me, but PS1 was written by me and in general was less polished.
PSCD is too early to say and in general probably RPGs sell more than card games

Or might also be related to the art. But I'm going to draw conclusions about PSCD in 6 months, now it's so early that makes no sense

Strange trends perhaps, but I kindof reckognize some of them at least.

Bionic Heart 2 had a larger budget, more detailed art, more ideas (social boss battles?) than its predecessor ..but.... I'll admit I'm one of those who still prefered the first game, mainly 'cause I -really- loved the artstyle there, was perhaps simpler, more cardboard like but still...
Bionic Heart (1) got me, I felt it had more charm.

As for sci-fi vs fantasy vs more real life scenarios? It -does- boil down to the quality of writing for me, (though an interesting setting is what draws me in). => while I felt Always Remember Me seemed ...safe, almost dull like? I -loved- the game for the quality of the writing, I think that was the game's strongest quality.

Admit high fantasy is my favourite genre, though I "eat" anything when comes to game, as long as they manage to lure me in.
Add exciting stories, like a human Empire fighting ogres, while a dark elf machiavellian plot to destroy -both- armies play in the background, I'm -sold-
Top

Also I think there may be a few other factors here, ones you've mentioned elsewhere like in tweets and blogposts. These don't relate necessarily to PSCD specifically since there could be other factors:

For one thing, there's more people doing visual novels than used to be. Added competition definitely takes a toll. And it may be me, but with so many services falling by the wayside, it seems like being on Steam is almost a must, even with the added competition.

Another issue is last year you didn't have any big releases of things. Obviously I'm no marketing genius or businesswoman, so take this with a grain of salt, but I think you should shoot for at least one new product (and not DLC) a year. More games out keeps your brand fresh in peoples' minds if nothing else.
Top

Woah, its definitely not true that women don't like sci fi. Women adore sci fi, just not usually soldier saves galaxy sort of way. Thats why I mentioned a gimmick. There are actually quite a few sci fi franchises that have a mostly female fanbase but they rarely if ever follow standard soldier fights with galaxy. Star gate has a large female following and has soldiers, but is more about exploration and gets away with it.

Also women gravitate more to the more old school sci fi stuff that puts a world forward to examine our own thing. I mean I did not read them but my neice adored Hunger games, pretties,and Divergent, three mainly female series that are in a sci fi world.

I see as many fans of Hitchhikers guide female and male. I just mean that maybe not stop doing sci fi because of a female fanbase and maybe change the way you present it?
Top

Or Doctor Who! , That's pretty sci fi'ey (and many of my friends love that show, girls or boys
Top

I don't think you should blame everything on sci-fi, although it's true the genre might be somehow part of what it makes PSCD sell worse than other visual novels (also, I should note that comparing PSCD to, let's say, SOTW is like trying to compare oranges and apples!).
I think there are some other factors at play here, not only sci-fi and the fact that many of women don't like it. Just for the records, sci-fi is my favorite, followed closely by fantasy, and I happen to be a woman. My husband, on the other hand, couldn't care less about any of those, and the only game he ever plays is that baseball game (MVP? MLB? not sure now which one, lol).
Anyways, it's more like a mixed bag to me. There was a time a couple of years ago when there where these books (and later movies) out about shinning vampires (you know what I'm talking about, don't deny it!) that caused such a frenzy that everybody else started to work on vampires. Have a movie about vampires? Shut up and take my money! Wanna write a successful book? Better make it about vampires! Vampires where the thing, the best bet, the latest fashion. If you had made a game about vampires back then, I guess it would have sold really well, even if it was horribly cliched or even not so well written. Mind you, vampires are still popular... just not as much as back then.
Right now, fairy tales seem to be a trend. I mean, Descendants? Frozen? Ever After High? Once upon a time? How about those movies remade and retold? Maleficent, anyone? Snow White and the legend of the huntsman? That kind of stuff is bestselling now. The fact that Frozen (which is supposedly aimed for kids) can sell better and stay on top longer than Star Wars should be revealing.
So, fantasy seems to be the trend now. Couple that with women being a good part of you customer base and their dislike for sci-fi (I admit that most of people I know who like sci-fi are men). There's also the stereotypes. People kind of expect characters in visual novels to be drawn anime-style. Anything drawn different is hit-or-miss it seems.

So, PSCD has all these:
- Sci-fi, ergo less women customers.
- Not trending right now (despite Star Wars).
- Unusual art style for a visual novel.
- Also, unusual gameplay for a visual novel. Not that many card game/visual novel hybrids around that I know of.

And while all these might sound (and are, in my opinion) really cool mixed up together, I can see why some people might be put off by some of these "features" or by stuff that has always been done some other way.
On the Mass Effect train, I did play a femShep, twice, but I also did a guy because... well, Tali, lol. I liked it better than Dragon Age (and sci-fi probably had something to do with that). But, I also played The Witcher, and loved it more than anything Bioware has produced till now. Again, I don't think the lack of sci-fi had anything to do with it.
To end with this wall of word (I apologize for my verbosity) I also played Aloners, mentioned up there by lanawinst, and while it was a small game (not a small story, mind you) and the setting was more post-apocalyptic than sci-fi (it also involved little tech), I found myself thoroughly enjoying it and hoping more games (bigger games) could make me this invested. It was about the story and the way it was presented, the genre had nothing to do with it.
I would be sad if you decide to skip sci-fi games completely, but of course, I would be even more sad if you had to stop making games, so that's that. I guess I'll just take what I can get.
Seems like you have another fan here, Jack.

No worries I don't plan to stop making games, nor sci-fi ones, though I'll probably need to restrict those to RPGs only. Also I don't want you to think that PSCD is a failure... excluding the RPGs, it's one of the games that sold more during the first month

It's only that I thought would do even better, but probably my enthusiasm for card games obfuscated my judgement

and also as Miakoda said lack of releases + particular situation right now makes selling games direct a thing of the past (sadly).
Top

jack1974 wrote:Actually on the articles I found on internet they say that 18% played as female shepard, not FINISHED it. So that's different!

Not what the statistic of Bioware tell
Spoiler: 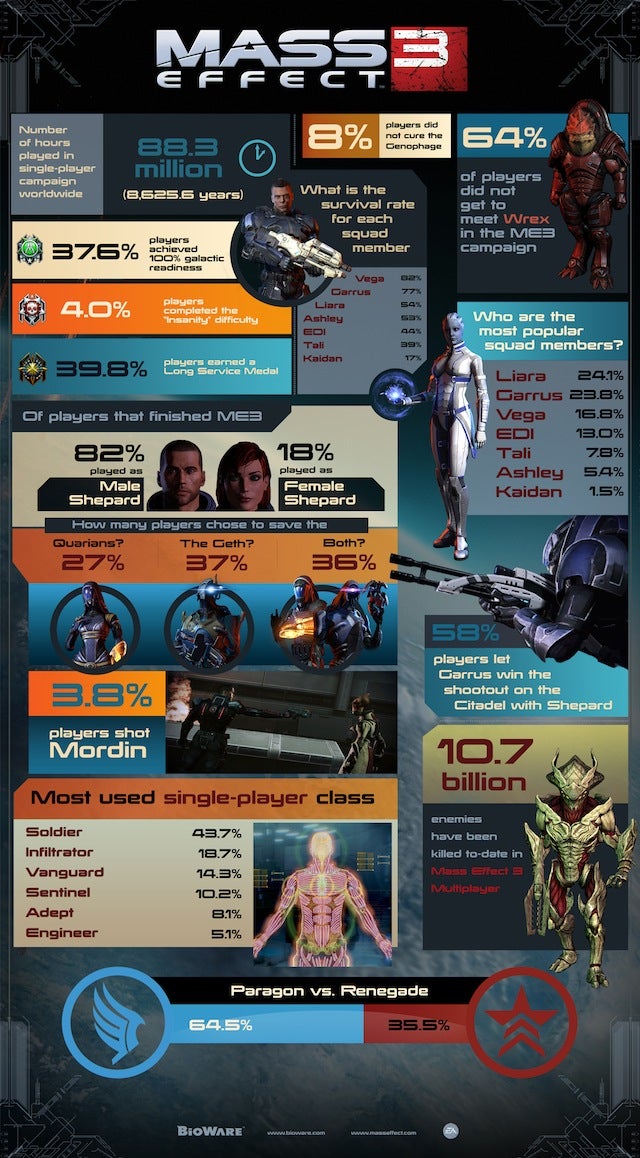