I took a walk and I think maybe I found a solution: I'm going first to code all the gameplay. All battles. Then get it tested as beta to make sure there are no issues. Only then, start with the writing. Maybe do a KS to help see if people like the idea (because that's the most effective way).
I realized my main issue was to begin working on a lot of writing and then maybe have issues in the gameplay, etc etc. and that was demotivating me already before even starting. With this system, now I'll concentrate only on the coding, and then once all that is done, I'll go with the writing

Obviously you have to take care of yourself. However, I don't really want another game where gameplay and story feel disconnected, like Amber. On the third hand, card game, so I don't care so much about the story.

Well, the thing is that beside doing the backstory stuff there isn't much you can do with an imaginary world. It was a mistake just to plan the game this way (unfortunately back in 2011 I was much more inexperienced and didn't stop to think about the potential plot problems).

In a fantasy world there's a lot of pre-existing lore, even in a sci-fi, in a completely supernatural world/limbo? it's very hard to make a compelling story, and considering I don't even think I can add more art/characters, is even worse. There are so many issues that I didn't think about, so the backstory thing is the best idea.

I am not sure if it will feel "disconnected" or not to be honest. But since for gameplay reasons you can explore any of the elemental worlds, probably yes. This is why doing gameplay part first makes more sense than writing the story - worse case can just be pure gameplay with some cutscenes.

As said, this is the perfect example of the kind of games that I'll never make again: badly planned, just getting carried away by the positive comments (due to art), didn't think about budget or potential long term issues, etc etc!

And just to be clear I think I can still make a great game - but in today's market is irrelevant (see PS2). So now every single move I make must be made thinking about revenues, or "work for at least minimum wage"

Today managed to implement one of the new features I was planning to add: CPU cards upgrading. The best would have been invidual card upgrading but already based on rarity is good.
I didn't want to make higher difficulty just start the match with a lot of cards already in play like in PSCD (although is still possible), instead even the CPU now can upgrade their creatures, and since there are 5 levels of upgrading in this game it has a big impact.

I can still kick CPU ass in hard difficulty, but I know all the game secrets 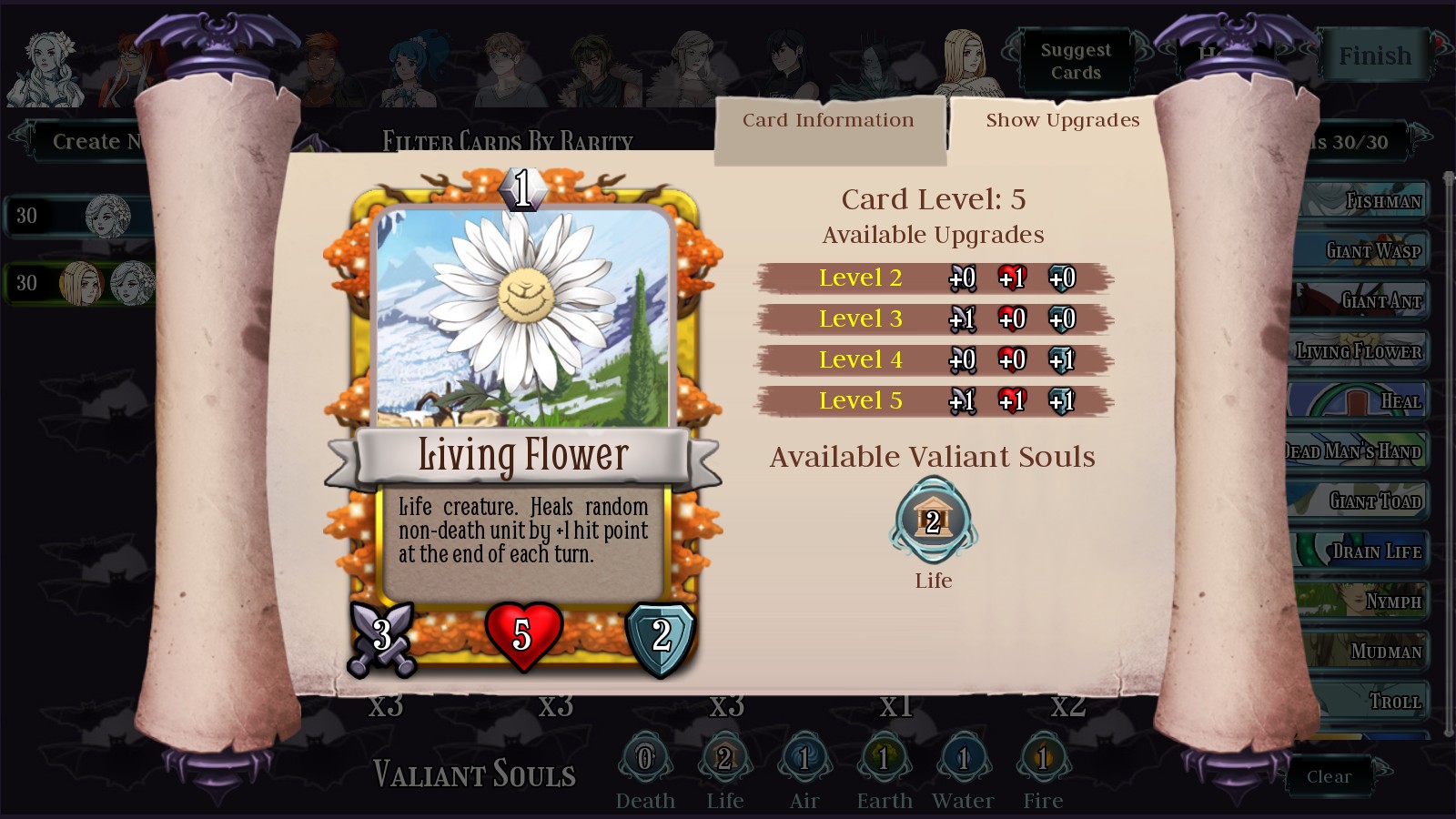 this is how powerful becomes a level 5 card, in this case is the most common life creature. Being able to heal itself by 1 each turn, if you summon 3 of these they can be rather difficult to kill

I think never like in this game will be hard (or almost impossible) to balance things, so I just want it to be fun. Different strategies and randomness will have big impact on the games (like all card games)!
Top

PS2 had bad results? I read a lot of good reviews about PS2 on Steam, so it seems that people like it.

I think that "levelling up" cards, sounds like an interesting idea.
Also it would be nice to have levelling options, but that might be too complicated to balance.
Top

Bad results compared to the time spent on development (1 full time year). Compare that with a short yuri game that takes 3 months max and causes no headache since there's zero coding... yeah

Basically the ROI (return of investment) was bad, not the game itself obviously, since many think is my best game

"Living" Flower is kind of funny. I'd expect a flower to be living. Unless it's dead. Or compost...

Haha I don't remember why I picked that name years ago - most creatures come from mythology/lore, but this one not sure. Anyway changing the name is not an issue since is a simple string

Anyway making very good progresses, I've implemented a lot of new features. Currently the game is crashing because of one of them though

I'll need to see what is it!
Top
Post Reply
45 posts