LOVE the names of some of these skills!!!

One thing I'm confused on, though: the black bar @ the bottom--what is that?
#ChambarasArmy #ChalassasFreedomFighters
Top

Devour deals damage while healing self, Dark Healing heals all allies, Evil Pact loses 1HP to get 1AT and heal player by 1HP. But that can change during testing

The black bar is to balance things with the other elements, nothing you need to worry about

Haha so it's a bit funny at the moment: I have the game working in BOTH the card and the RPG framework

Of course with just a few cretures.

No I didn't go nuts (also because I already am, how could that happen!?).

Simply I want to do more tests. The game mechanics are the ones I already decided: summon creatures that fight for you, no random draw, etc.
But each framework has some strong/weak points, for example doing "damage over time" with the card system wouldn't be easy, neither have the AI use specific skills, etc. And it wouldn't have different movement speeds (that's the biggest thing honestly). So I couldn't have a creature moving faster than another, because of how it was designed.
On the other hand the card system is easier to code since has less rules, you can "build a deck" (which would be the units) which is already implemented, etc.

Anyway, in practice now I'm doing some tests with a few creatures to see what will work better. It's such a complex game (not to play, for me to design) that I want to make all the possible experiments before deciding to code the whole thing with one system 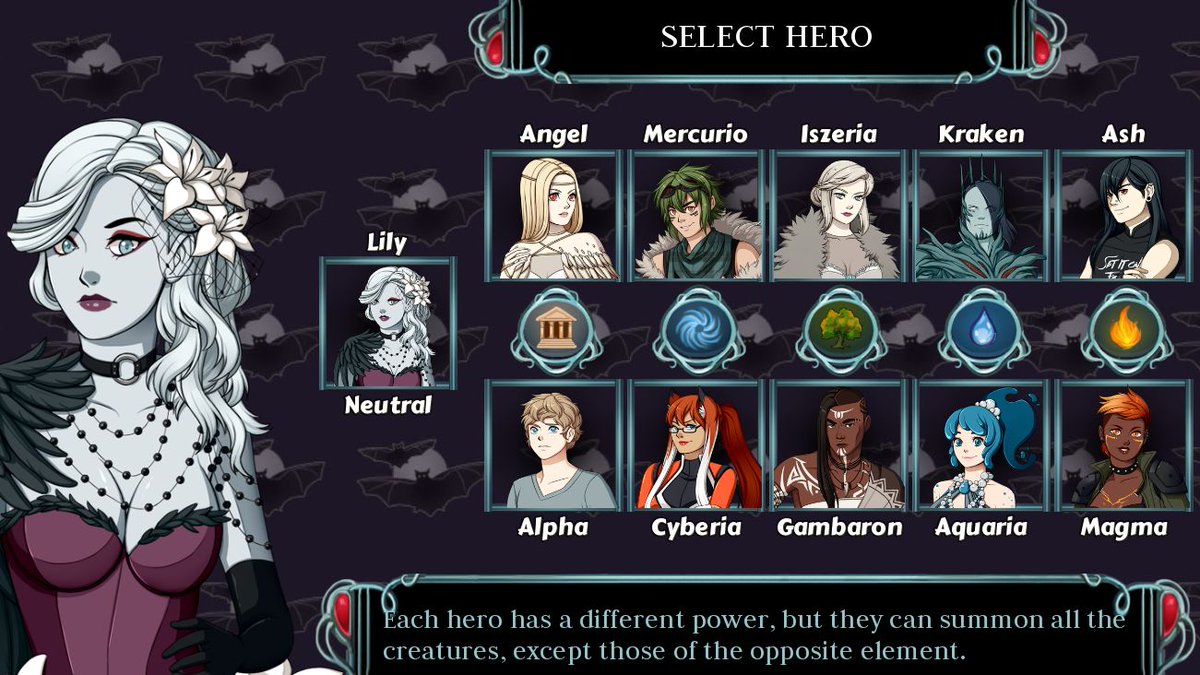 This is probably the hardest game to design ever. Also because was designed to be a card game and now I'm doing some sort of hybrid

With two heroes, things were too confusing (also a bit overpowered).
Right now, you choose an hero who has an "hero power", like Hearthstone (for those familiar with it).
Then you can summon creatures based on costs, like a card game. BUT they're not cards! they're RPG characters, each one! haha I know it's insane. Each creature should have two skills, which means a total of 72x2=144 skills

Anyways, I'm going to make some tests battles first, before I design all those skills for nothing. Testing, testing, scratch it, start from beginning, etc. The wonders of game design!
Top

The one thing I didn't like about the card game in PSCD was the resource system. It seemed like an attempt to be strategic where you need to balance your cards out across the resource types, though in practice I was rarely resource constrained enough to notice (except for credits).

Do you really need 5-6 separate resource types here or can you get away with one? Hearthstone just has a single mana system. King's Quest (which is similar gameplay-wise to Heroes of Might and Magic) uses a leadership system to limit the number and strength of your army. I wonder if having to juggle fire, water, wind, earth, and heart might be a little excessive. Especially if I pick Aquaria, am I really going to be summoning a bunch of fire spells and stuff? (Or do resources persist between battles so you have to rotate heroes?)
Top

I believe from earlier talk that everybody uses a single resource type that grows with each turn, just like Hearthstone.
Top

Yes, just one resource in this case, like Hearthstone. However I just emailed Anima because I realized a really dumb thing

I am using the rpg framework, I know it well so I could have done a sort of summoning thing (I used that system in SOTW many times).
The problem though is that in the RPG framework there aren't "fixed turns"

which means that's cool because a faster creature could attack more often (more realistic) but on the other hand, there isn't "player turn" and "CPU turn". If a side has 3 fast characters, might play twice. And if I increase the resource each turn, guess what happens? total unbalance!

So right now I pause everything to think. It's really crazy, of course the easiest solution is to use the card framework with possibility to use actions/skills, Anima told me that could be done, so maybe I'll just wait for those features to be added and then try again.

It's a good thing that I have several "normal" dating sim in the works, because I'm getting a bit burned out by all those more complex games. They really drain your energies, doing 1 a year should be the max allowed

jack1974 wrote:It's a good thing that I have several "normal" dating sim in the works, because I'm getting a bit burned out by all those more complex games. They really drain your energies, doing 1 a year should be the max allowed

Forgive my getting slightly off-topic here, Jack, but every time I see "dating sim" I get reminded of Roommates and need to know when we'll see somethin like that again--pure comedy.

Whether it's in a dating sim or anything else. DYIN to see such!!!!!!!

If I could find another writer like that one (who now is busy writing Loren 2), I would do another game like that tomorrow.
In many cases I'm making games depending on what I have available (art, writing, etc). Very rarely I do a game in total freedom, especially since I cannot even write it myself

jack1974 wrote:If I could find another writer like that one (who now is busy writing Loren 2), I would do another game like that tomorrow.
In many cases I'm making games depending on what I have available (art, writing, etc). Very rarely I do a game in total freedom, especially since I cannot even write it myself