Annd I just realized that I skipped the number 9 haha. Well told you it's just prototyping/work in progress, right?

Example of a mission reward: 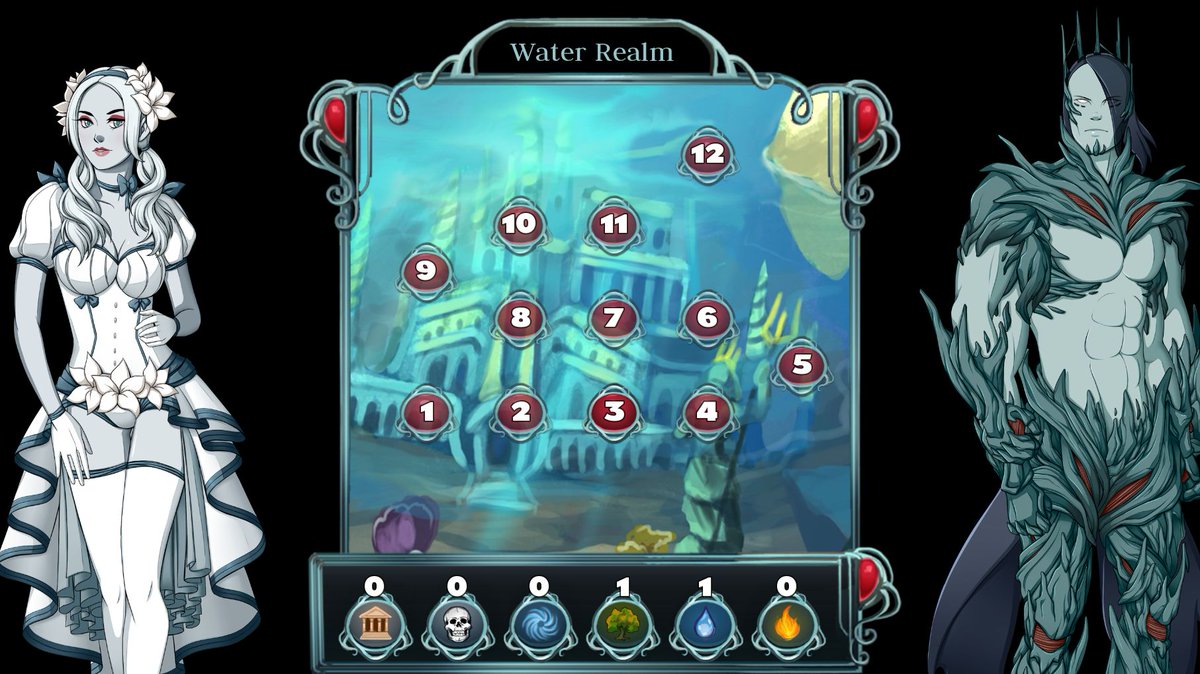 You'll get 1 water and 1 nature resource, which you can spend to improve water/nature creatures 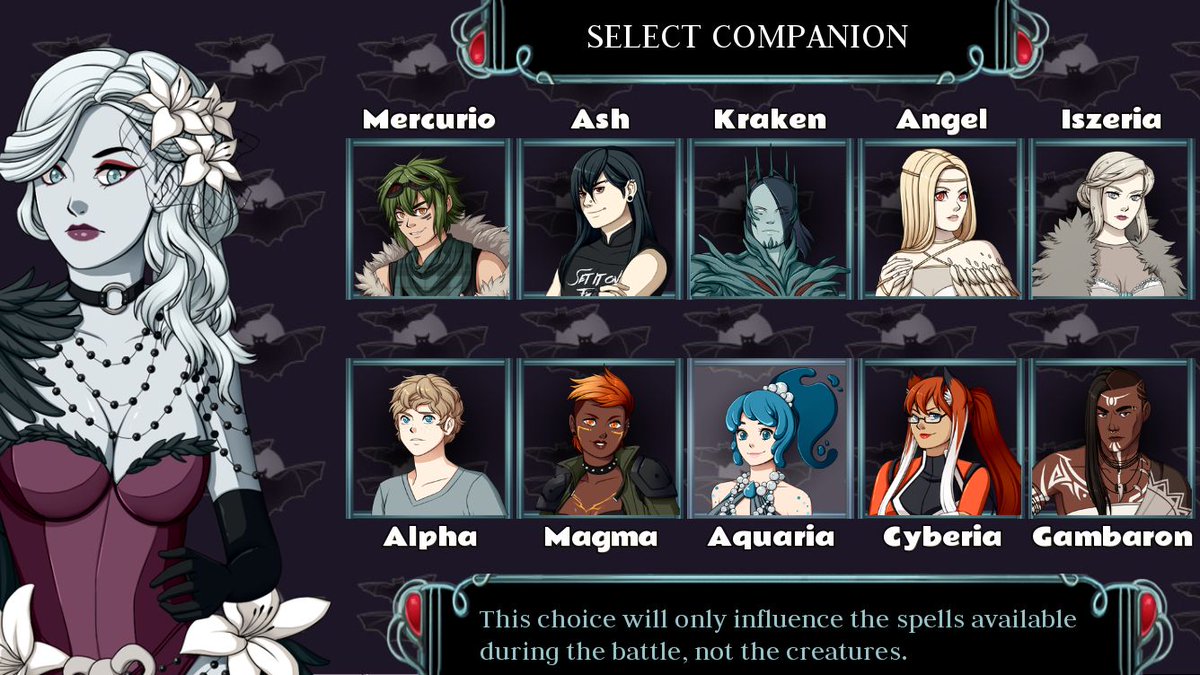 Initially I thought that the two selected characters would determine the available creatures to summon+spells. But this way, would mean that the Death creatures would ALWAYS be present (since both main protagonists are death avatars).
So the options are two:
1) allow to choose both the two characters, which means that Lily/Ace could not be present
2) the chosen ally would determine only the spells (the spells are cast by the avatars and are unique to each), but the creatures would be choosen in another screen

I went with option 2, since the first one was a bit weird (the main character not present in the fight). Besides I think is better if you can select the elements separately in another screen. I am even thinking if to just have a sort of "roster of available creatures", each one with a value (based on the level/power) and you can spend "Soul Points" to choose which creatures will take part to the battle.

As you can see, there's still a lot to brainstorm

And also there's not a right or wrong choices, all the various combinations could be interesting to play, but "sadly" I have to pick one

Are they paired up by element? Little hard to tell, but doesn't look like it because the first and fourth columns are one gender.
Top

No right now no, in the final game they'll be

Haha voilà I just did it: 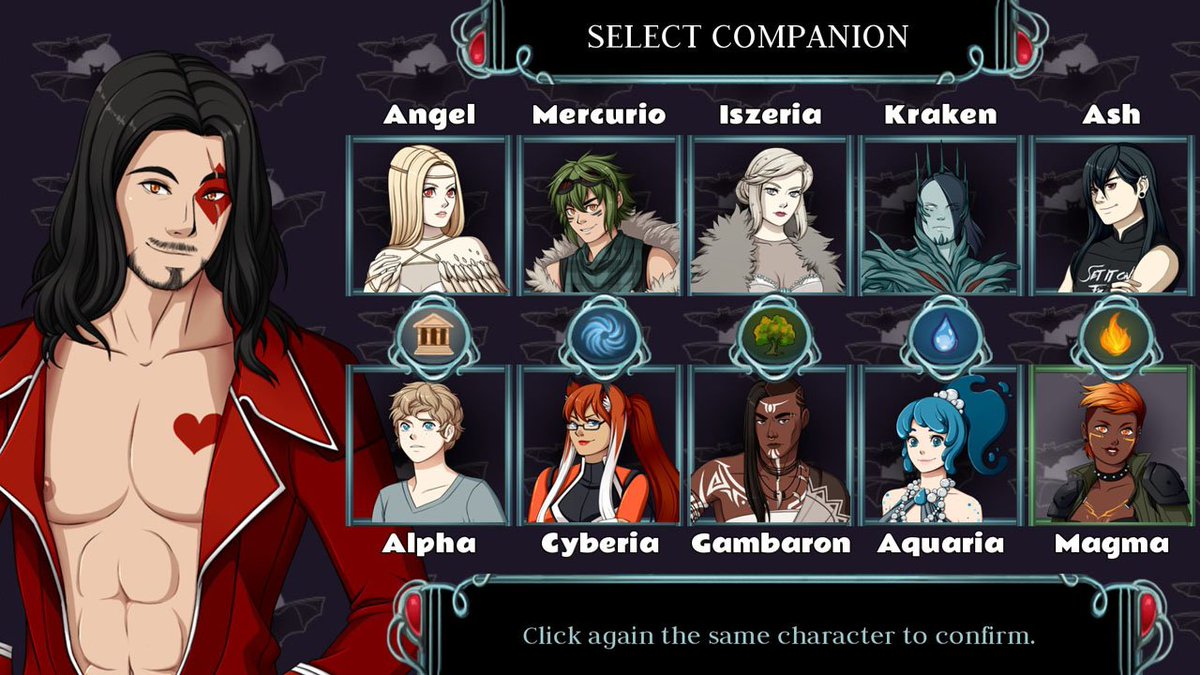 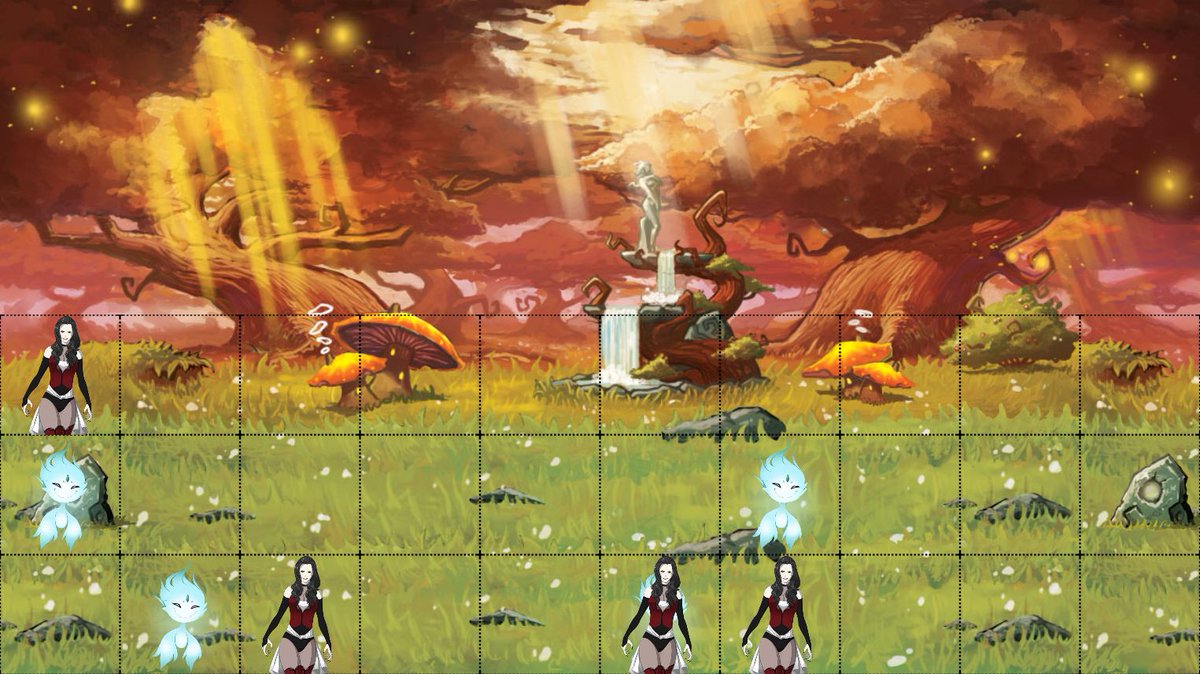 some experiments with a sort of map-grid... the problem is that some enemies were designed for cards, and so looks cut-off when shown in a map. And there's no time (or money) to redo ALL the 72 enemies as mini-characters on the map.
I could just do this using the same engine as Loren's, but honestly I wanted to try doing something different.
It doesn't help that probably 99% of people will just play this game in VN mode

already knowing this kills my motivation a bit. I am not sure, maybe I'm just burned out, but I can't find the right inspiration for this game.

Next years I'm going to do all fanservice visual novels and stop. At least you don't go crazy trying to find a gameplay

In my opinion ... The style and tone of the art makes me think that the game will have simple but addicting game mechanics, like Pokemon. The fun would be in exploring the world, learning the character's abilities and picking your favorites.

Sizing the art too small sucks the life out of it. This art screams big and bold and would benefit from treating it like a mobile game (again, just in my opinion).
Top

Yeah the pokemon thing was an option. I am not an expert, and when I watched some videos the gameplay/rules seemed REALLY simple. But it's successful, so as you say it works.
Maybe as usual I'm overthinking it - not necessarily a RPG must have 150 skills to be fun

One thing you're 100% right: showing the art so small (even if it would be displayed bigger during the status screen and such) it's really a bad idea

OK I think I'm going with pokemon style for sure. I started doing some research, and it's fun. Besides there will be already 3-4 more RPGs using the classic formula of party vs enemies (PS2, Roger Steel, Loren 2, etc)