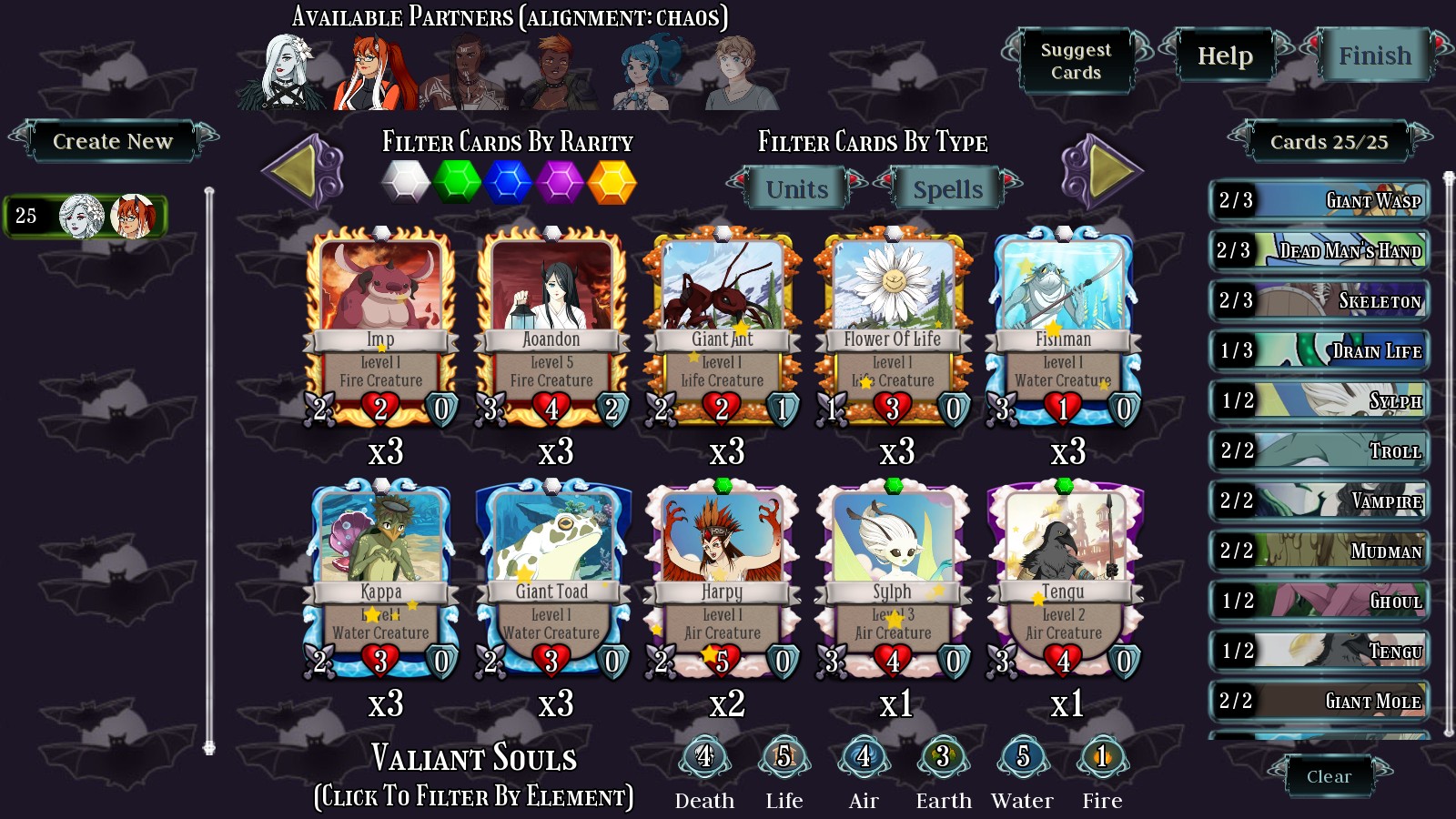 I'm making very good progress, but I'm still very behind because the thing is that this game is INSANELY HUGE (just the gameplay, not even considering the writing!). I'm adding a lot of useful functions/things, like now you can see if you can upgrade a card because there's a little star animation over it, and so on.
Top

Does the card upgrade only applies to creatures, or can spells be upgraded as well?
Top

No only creatures, since the spell upgrade wasn't present in the framework, and I don't think I can implement it (I already added so many functions but this one would be a big change!)

edit: also because some spells couldn't really be upgraded in a fair way, like "kill random non-legendary injured creature", that one would be hard to upgrade. And so on.
Top

To be honest right now my main worry is that I can win 95% of battles in hard difficulty. I need to check how I did in PSCD. Probably there were more wall/taunt units, or the CPU started with more defense or something, since I think it was harder (but I might be wrong, it's 4-5 years since I last played it!).
Of course I know that several people (card games newbies) thought PSCD was OK at normal difficulty, so perhaps I'm worrying for nothing 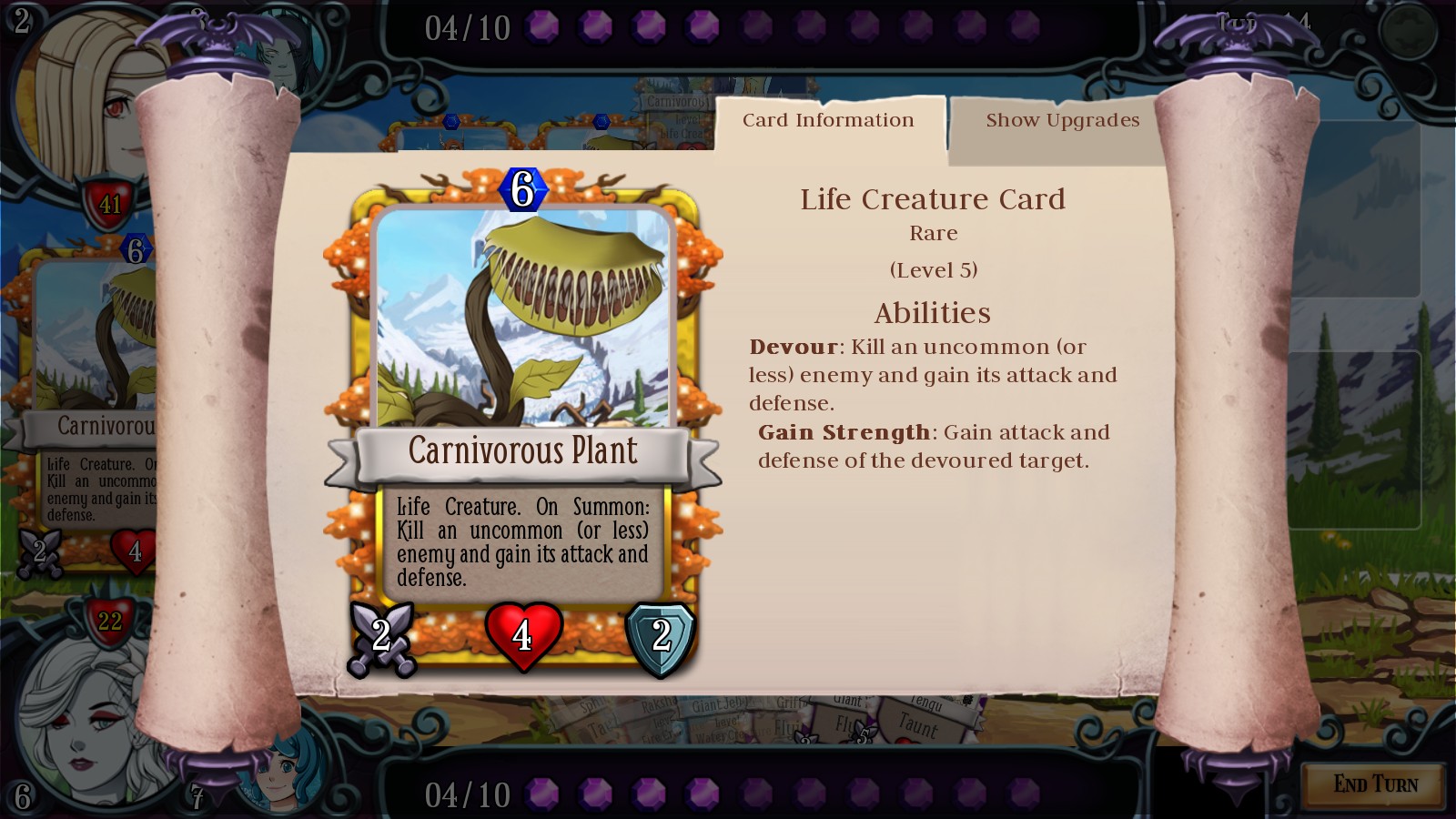 I am still doing tests, worse case I can reduce it to "gain HALF attack and hit points of target" if I see it's too strong. But I finally managed to code the AI to use it well (before it was summoning the card always in wrong situations so couldn't "eat" the creatures!).
Top

Haven't updated in a while but I'm making very good progress! Behold the power of the black castle: 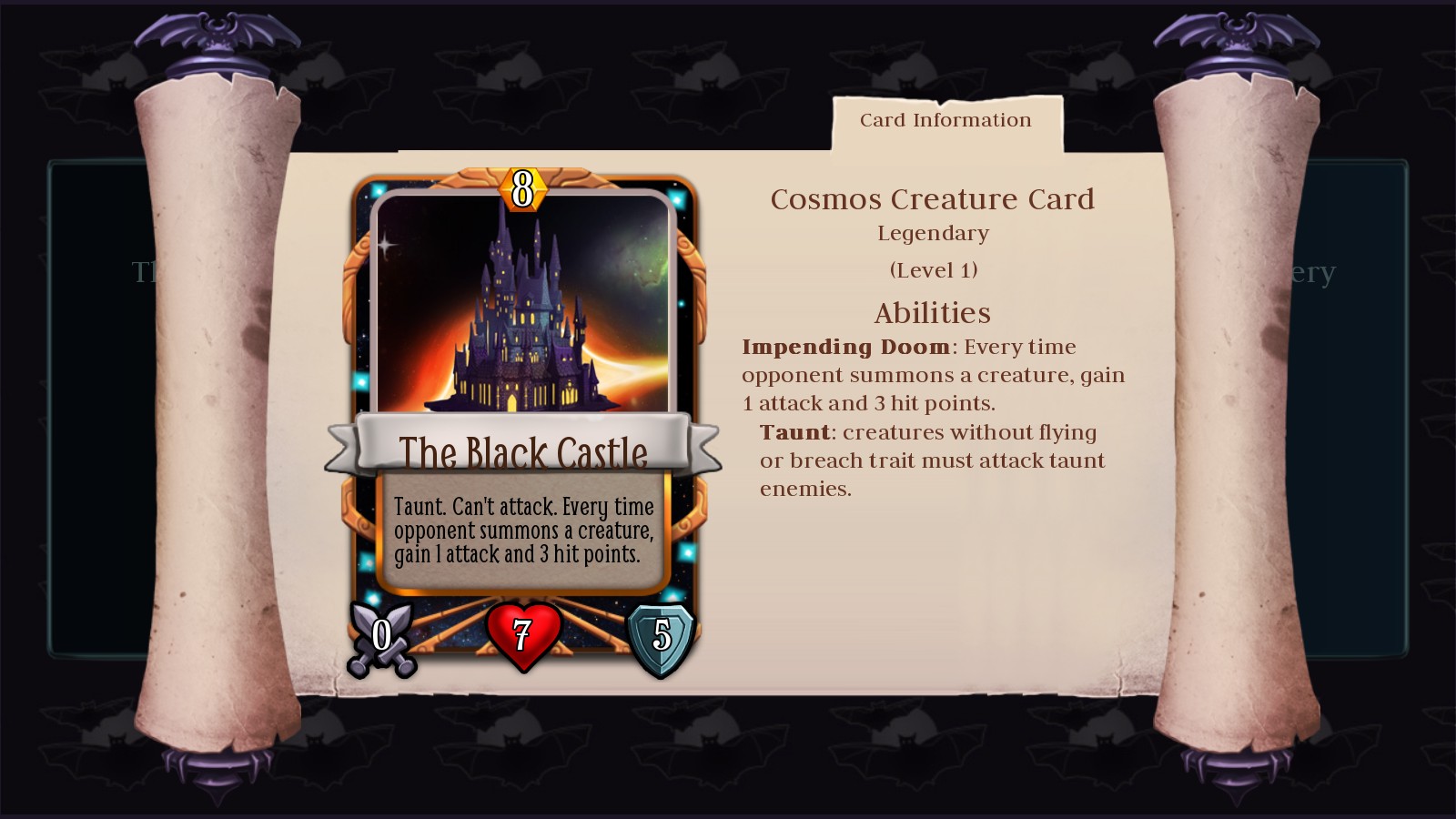 (there's a small issue with this new card border with the label vertical aligment, but will be fixed).
In short, without spoiling too much, if you dare to challenge Mantras, he'll fight you himself using the power of Cosmos! *

* seriously OP cards but I'm sure experienced card players will be able to beat him without problems!
Top

First video of the deck screen and upgrade system

So this month I am hoping to have the gameplay demo with the first 2-3 battles (not sure if I'll make in time but I'll try).
I have a doubt though: in the game, depending on choices, there will be a good or bad ending for each love interest. With the good ending you can unlock the romance scene (in this game you can romance more than one character at time). And with enough good endings, you can also unlock an alternate ending, which means 2 bonus extra battles at the end of game.

The problem is... I am not sure how to do this. I mean, if you play in VN mode, you can quickly replay the game. BUT in VN mode you don't get to fight, so you don't have the 2 bonus battles. The game can be pretty long, if you do all the fights which are 72, but maybe mess up with the characters backstories, you could miss the two bonus fight at the end, and to get them you should replay the game from beginning

Not sure, I mean there are plenty of AAA games which have multiple endings and if you screw up at some points during the playthrough, you're basically screwed

but I think it might piss some players off. I could maybe have an option to skip battles which people have already won in the past? would be a bit like cheating but not completely, if you already beat battle 37 in a previos playthrough... that's the best idea it comes to mind right now!
Top

I want a super "secret" ending that requires you to play all the battles! But I'll play them all no matter what.

Probably more than once...
Top

Lol I hope so, but anyway you're not the average player for this kind of game

the total amount of battles should be around 75, almost 3 times PSCD...
For now I'll stick with that idea above, maybe allowing it only if you play in easy/normal difficulty.
Top
Post Reply
51 posts