One of the various games I'm working on at the moment is Queen Of Thieves (QoT). It has only female characters but a yuri option (so maybe can still interest some male players

).
The game is not a "true RPG", has a dating sim part and also a sort of mini strategy game (you need to go in houses and steal).
There are only 3 characters (the three sisters) so the battles should last less than SOTW. They should be more like act1 of SOTW

This WILL BE A "SMALL GAME", at least in the RPG part! I am going to do 9 skills each so 27 in total.
The big problem I'm facing now is that I wanted to come up with a SIMPLE combo mechanics. By simple I mean that could be easily understood (since this game should be more "casual", even if I'll have a hard mode which will provide challenge in any case).

So far I had something like this (it's not done, is just a work in progress): 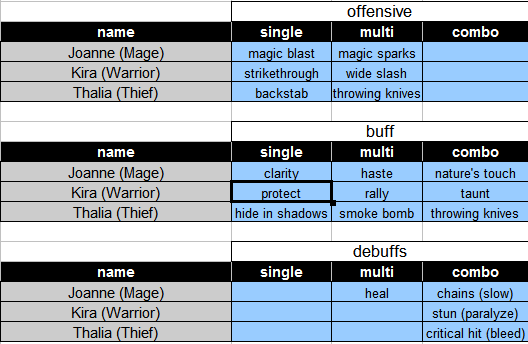 3 offensive, 3 defensive/buff, 3 debuffs. I was thinking to have LIMITED healing options, but automatically heal after each battle. It shouldn't be an "endurance game" like SOTW after all

The idea was that you can make combo with all 3 categories: the problem is that I am unsure what is the best way. For example:
1) Char A: skill1+skill2=unlock combo skill3
2) Char A: skill1 + Char B: skill1 + Char C: skill1 = unlock combo skill 3
translated could be, of course each action would be a turn:
1) Kira protects Joanne from enemy hits+bonus attack-> Kira uses Rally to increase all party attack by 30% -> Kira uses Taunt forcing enemies to attack her for X turns.
2) Kira protects Joanne from enemy hits+bonus attack-> Thalia uses Smoke bomb: all party defense up by 30% -> Joanne uses Nature's Touch to cure the party from all negative conditions

In the first one the advantage is that each character is independent, the second instead requires teamwork. For the attacks would depend on which target you attack, because if you use skills on different enemies then the combo wouldn't unlock (otherwise it would unlock automatically)... well, is a mess in practice

If anyone knows of a good system to use or has any suggestions, I'm all ears!

Is not essential to use the combo system but if I could add it I think the game could be more fun to play. Otherwise is not a big deal

May be you should think not about 9 combo, but 3 combo? I mean each character will have just one combo.
For example, Thalia will have special combo - 'Impale' or 'Fan of Knives' with 500% damage.
Conditions:
1) Thalia can make this combo only if she has full bar of health
2) Thalia can throw knive(s) just from second line.
3) Thalia should be protected by somebody for turn.

Full bars will rarely be a condition

since I want to limit the healing option both for party and enemies to make the battle last less.
Top

As you wish, I just glad you understood the main idea.

Why do I feel like this game won't be as simple than it is supposed to be.

First the second way you propose to do combo is kind of..bad,with it, the player will feel oblige to always use the same sequence of action rather than chose in fonction of the current situation.
the first one is simple but too classic.

Why don't you use something like the stagger condition in SOTW except the "stagger" condition doesn't drop stats but is the condition to do a combo attack
for exemple:
there is 3 types of stagger(one by sisters).
kira has been attacking the same ennemie for several turn so he get the stagger condition,kira's version.
Once the enemie is stagger you can use only one combo attack on him but only joanne or thalia can do the combo attack,because he's been stagger by kira.

of course the combo can be a "extra turn" so the sister who use it does not have to wait longer to for her next turn than if she didn't use it.

the idea behind this is to not restrict the combo skill has "do X skill than Y skill to obtain Z skill" with this you do not have a specific order of action to do to be able to use nature's touch for exemple.
Top

Exizel wrote:Why do I feel like this game won't be as simple than it is supposed to be.

Ah, I don't REALLY KNOW why you have that feeling! No no no, I think this time will be very small for real!

Exizel wrote: First the second way you propose to do combo is kind of..bad,with it, the player will feel oblige to always use the same sequence of action rather than chose in fonction of the current situation.
the first one is simple but too classic.

Yes indeed the first one was bad, I already discarded it

forcing players to use tactics is bad.

Your idea seems better indeed, I already thought about something like that but need to define the details. Probably I'll link it to a specific condition that is unlocked, or maybe simply could be based on the class, in a rock-paper-scissor way, since even enemies have 3 classes (but this might be too much restrictive).
Anyway for now your idea I think is the best one

My idea would be to use the classic limit break mechanic (it's basically the same idea). Each <condition>* fills a bar, and when it's full, you can do a special move (multi?) by yourself.

That does mean 4 combos, J+K, J+T, K+T & J+K+T. Or even more if it depends on who starts the combo (like J+K and K+J are two different combos, thus ending up with 9 possible combos (or even 12, but that WOULD be too much)), but that might be more than you want if you prefer to keep it really simple, even if I personally think it would be a tres cool system.

^I tend to like limit break systems, so anything like that would be cool. Of course, if you want the fights to be short, then the bar-filling needs to happen pretty quickly, but that's just a question of measure...

Anyway, here's a random idea....yeah, well, maybe people aren't too keen on randomness, but a really simple system would be "random" auto-buffs in the beginning of the fight. Trying to explain:

1) System will randomly decide if there will be an autobuff before the fight. Let's say that in the beginning of the game, there's 50% chance that there won't be a buff but as the ladies battle together along the course (= they get more experience in fighting together), the chance of no buff goes to zero.
2) If buff = yes, , the system will then randomly choose between the three ladies who will cast the buff in the beginning of the fight. Ex: System chooses Joanne.
3) Joanne buffs Kira or Thalia (50% probability for either). Ex: System chooses Kira
4) Fight starts with Joanne & Thalia normal, Kira buffed. No turns wasted.

In this model, there would be 6 different possible buffs J => T/K, T=> J/K, K=>T/J. The buffs could be either stat or skill related, for example, when Joanne buffs Kira, Kira's attack could be higher for the whole fight/for the next 3 turns or her Strikethrough could do x2 as much damage to the backrow.

Looks simple on paper. Not so sure how easy it would be to code and how much frustration the randomness would bring, but at least the positive effect would vary from fight to fight.
Top

will need to do some preliminary testing to see how everything works but at least now I have something to work on!
Top

finished the "skills design". Initially I thought to have do damage/take damage and buff/debuff, but then I realized that you would get a combo counter increase even not fighting... so I only raise the 2 combos counter by doing damage or buffing your party.
As you can see there aren't any healing skills. The fights in this RPG will be interesting since you can't rely on healing. I'm even thinking to limit the number of potions you can bring with you during your missions to 1-2 slots